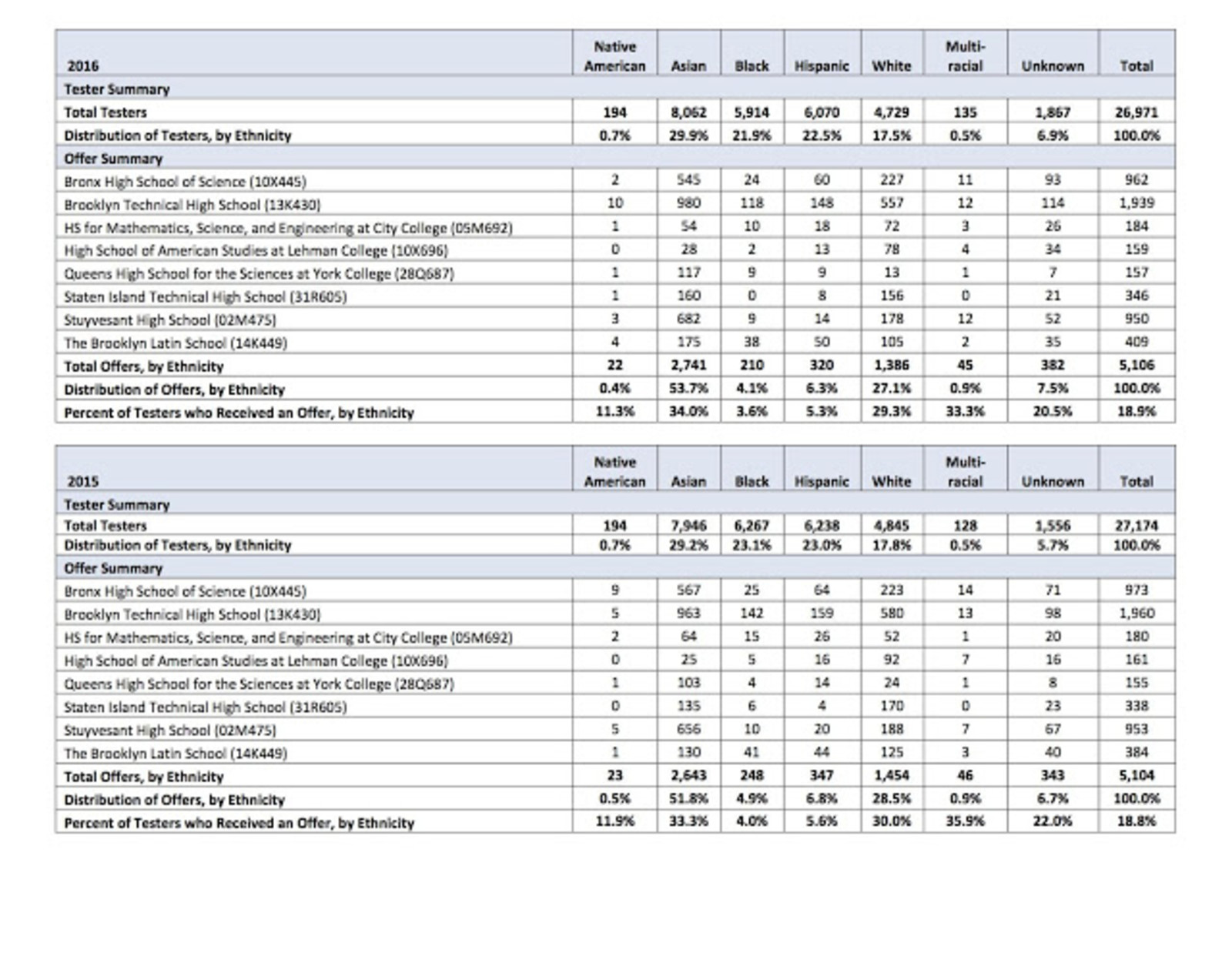 MARCH 2016: High school acceptance letters arrived Friday for the more than 75,000 8th-graders who submitted applications in December. Ninety-three percent of them went home knowing they were accepted by a high school; the remaining 7 percent came up empty-handed and must apply again, choosing from a list of schools that still have room. (See our picks here.)

The number of Black and Hispanic students accepted at the highly competitive specialized exam high schools dropped, prompting Schools Chancellor Carmen Fariña to once again call for "strategies to foster diversity at these schools."

The city touted gains made by students with disabilities who were accepted in higher numbers than ever before by some of the most selective schools, not including the specialized high schools.

Here's a rundown of the results.

Eighty-six percent of 8th-graders were accepted into one of the top five programs they listed on their application and 48 percent were matched to their top pick. Students could apply to up to 12 programs and 97 percent of those who filled in all the slots got an offer.

The stats are not as strong for students looking to change schools for 10th grade. Among the 5,159 9th-graders who applied for a 10th-grade seat, 62 percent received an offer.

Of the nearly 27,000 8th-graders who took the SHSAT (specialized high school exam), 5,106 students were offered a seat. LaGuardia High School of Music and Art & Performing Arts, the specialized arts high school, made offers to 1,114 8th-graders, to one or more programs.

"It's important that our city's specialized high schools reflect the diversity around them, and we are committed to achieving that without impacting rigorous standards," said Fariña in a statement. "We continue to review a variety of strategies to foster diversity at these schools."

The percentage of White students accepted at a specialized high school also decreased lightly, from 28 percent last year to 27 percent in 2016. There was a slight uptick in acceptance of Asian test-takers: from 33 to 34 percent. Asians represented nearly 30 percent of all 8th-graders tested as compared to 22 percent Hispanic and Black and 17 percent White, as the chart on this page indicates.

The Department of Education (DOE) has not released the breakdown among 9th-graders who took the SHSAT, but overall, according to a DOE spokesperson, 183 or 13 percent of the 1,442 who took the SHSAT earned a seat at one of the eight testing schools. Thirty-seven 9th-graders were admitted to at least one studio at LaGuardia.

For students with special needs, applying to high school has been notoriously difficult. This year, the DOE said, many more students with disabilities were accepted at the city's 15 most selective schools, such as Eleanor Roosevelt, Baruch, Scholars' Academy, Leon Goldstein and others. Of the 10,300 students with disabilities who applied to high school this year, 275 were given offers at one of these extremely selective, screened schools. That's four times as many as were admitted in 2012, the DOE said.

"This is significant progress," says Lori Povesker, manager of disability and education policy at INCLUDEnyc, "yet the challenges to appropriately serve students with disabilities still exist for there to be certified special ed teachers in subject areas, such as Spanish language or trigonometry."

More than 2,500 students with disabilities—those who receive special education services for more than 20 percent of the instructional school day—got an offer at a screened school, compared to only 919 students in 2012. Still, some highly popular schools continue to struggle to admit special needs students and have many openings in the second round of admissions.

"I still think the culture has not changed in some places despite the city saying you have to do it [admit a percentage of special needs students]," Podvesker said.