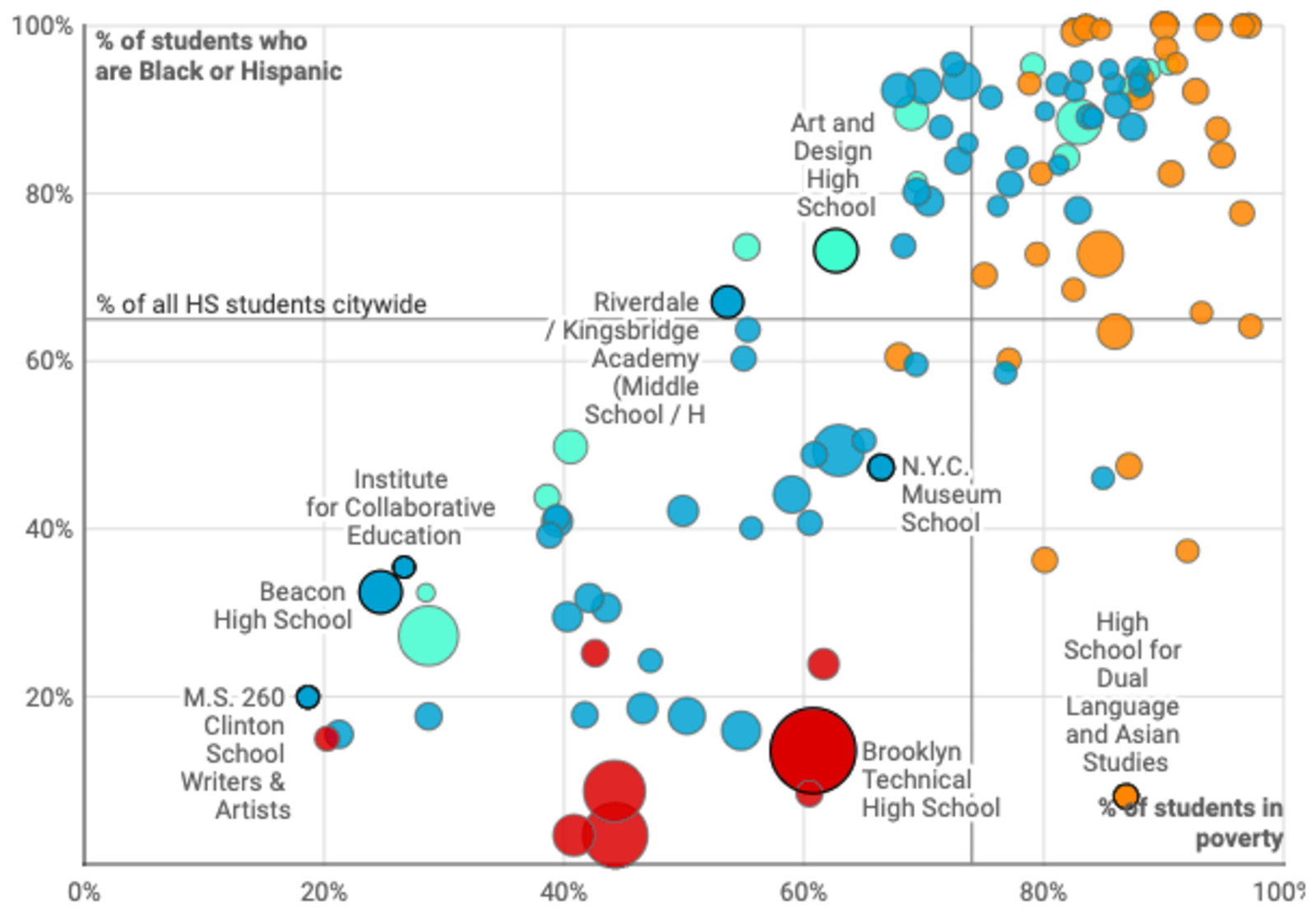 Next year’s high school application season will be unprecedented. High schools that screen applicants won’t be allowed to look at this year’s attendance records, and there will be no standardized test scores or numeric grades for the Spring 2020 semester. While some schools may adapt by using alternative or more holistic screens like portfolios, essays, or school-specific tests, others may find it hard to implement and evaluate those new measures in time and opt to eliminate screens for the coming admissions cycle.

While this is understandably creating confusion and controversy, I thought it would be helpful to take a step back and look at the large potential upside: at some of the most competitive high schools the incoming classes of 2021 could be far more demographically diverse than they have been for a long time.

Screened admissions methods disproportionately sort students by race, class and academic ability. We wrote a whole report on it last year, and this visualization shows clearly just how few Black, Latinx and low-income students attend the specialized high schools (in red) and academically-screened schools (in blue).

This viz shows all 112 high schools that were entirely screened in the 2018 admissions cycle. They are broken down by type of admissions screen because not all screens are alike. Some require that you prove your artistic ability in an audition. Others only require you to show that you are proficient in a language other than English. Dozens are academically screened (such as Medgar Evers or S.T.A.R at Erasmus), but have lower minimum grade point averages or test scores as thresholds for admissions that allow for a broader range of students while still ensuring that all who are admitted are ready to handle the work. Most of these types of schools better reflect the demographic makeup of the city as a whole.

But the most competitive screened schools, which pit students with grade point averages of 95 against those with 94, or standardized tests scores of 4.2 against 3.9, tend to admit far fewer Black, Latinx and low-income students.

This year may be an opportunity to see if adjustments in admissions policies at the most competitive screened schools give students who are ready to tackle the work, but who typically don't get in, a foot in the door.

What do you think about the potential effects on admissions? Tell us in the COMMENTS below!

June Regents are Cancelled. How Many More will Graduate?