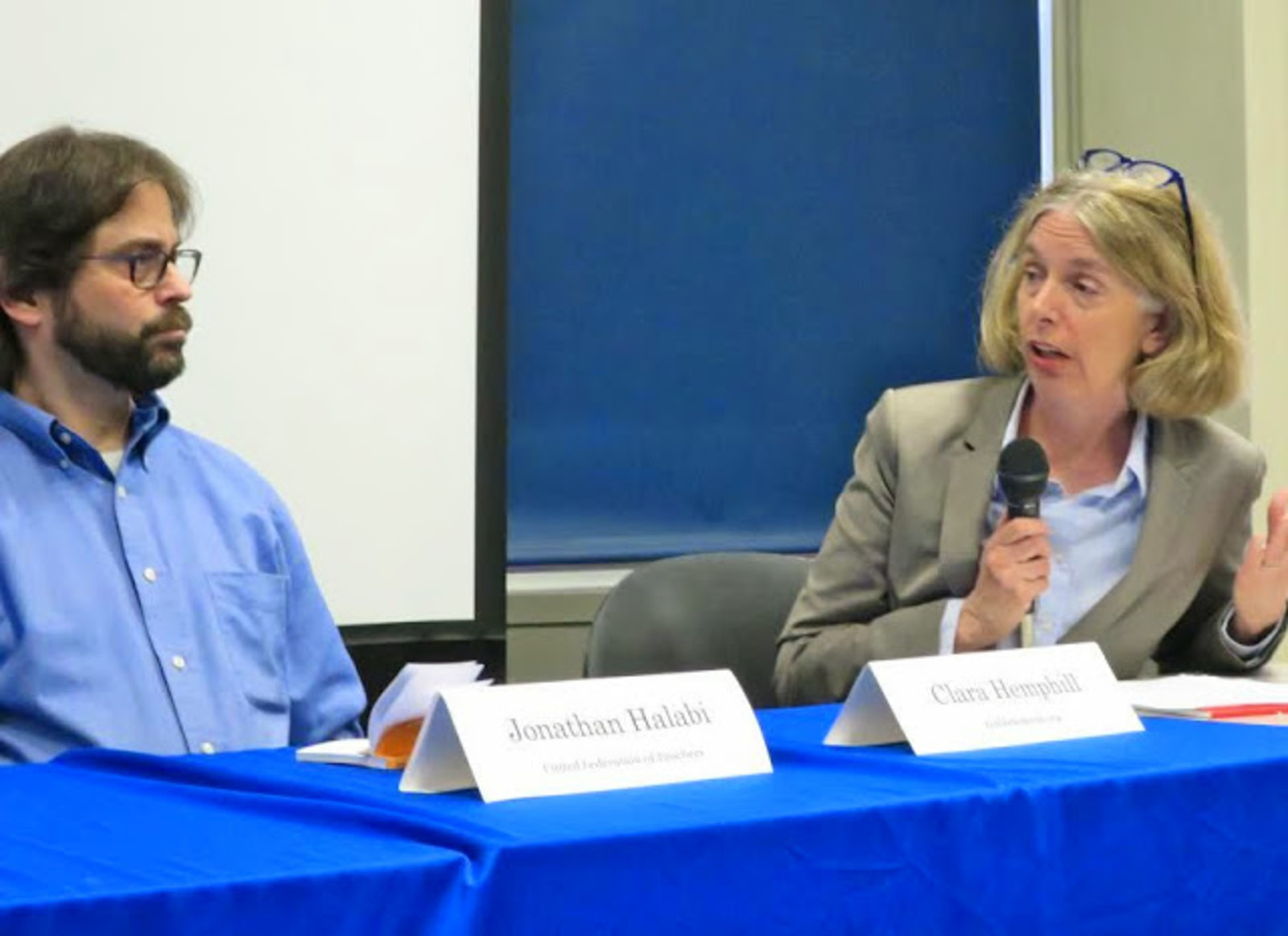 Should the city's specialized high schools reserve some spots for top 8th-graders in every city middle school, regardless of the child's score on the specialized high school admissions test (SHSAT)? A recent report cited that as the change most likely to increase the number of black and Hispanic students at the schools but panelists at a forum Friday disagreed over whether the city should take that step.

The panelists also differed over whether an exam should continue to be the sole means of selecting students for the schools, but they concurred that New York needs to provide more outreach and preparation for the exam, particularly in black and Latino communities.

The forum, sponsored by the Korean American League for Civic Action and Asian American Bar Association of New York and moderated by Clara Hemphill, founder and senior editor of Insideschools, came after admissions figures for the schools once again show few spots going to black and Latino students. Of the 5,103 students admitted to one of the eight specialized exam schools for next September, 5 percent are black and 7 percent Hispanic, while Asians account for 52 percent of offers and whites 22 percent. Only about 1 percent of students admitted to Stuyvesant are black.

Solutions to the problem are hard to come by.

While the panelists agreed the lack of black and Latino students at the schools was disturbing, they disagreed over how to address it. A recent study by the Research Alliance for New York City Schools concluded that considering state tests scores, grades and attendance would probably increase the number of girls, Hispanics and whites admitted to the specialized schools. It would decrease the number of Asians, the report's authors, Sean P. Corcoran and Christine Baker-Smith, wrote. The change would not appreciably increase the proportion of black students admitted, and might actually lower the number.

The only change in admissions policy that would "substantially change the demographic mix," the report said would be granting entry to the top 10 percent of students at every middle school. The authors noted that that would also reduce "the average achievement of incoming students, particularly in math."

Under current policy, many middle schools in the city do not send a single student to a specialized school. Mike Mascetti, executive director of the Science Schools Initiative, which provides free academic support and SHSAT preparation to promising students, said that even top performers from many middle schools could not compete at the academically demanding specialized schools. At one Bronx middle school, he said, "There wasn't a single student in that class who was performing at even the lowest level of kids in our upper Manhattan program .... They couldn't add fractions."

Rachel Kleinman, senior counsel at the NAACP Legal Defense Fund, argued that was "the best argument to change the test" because there are kids who are not prepared to take the test .... They have skills that these tests are not measuring. They are doing well despite the odds." The Fund filed a complaint in 2012 challenging the test.

Disparities in admission among racial groups reflect deep problems in New York City schools, panelists said. Edward Q. Seto, a former city school superintendent and principal of Curtis High School, noted that only 1.9 percent of black 7th-graders got a 4—the highest score—on their state reading exam. "I am sure there are top achievers in all of our schools but I believe the great majority are not prepared to master even the core curriculum, " he said. "We must do a better job of preparing all our kids."

Efforts to prepare students can boost their scores, statistics show. Dream—The Specialized High School Institute, a 22-month program aimed at helping low-income students prepare for the test, has had a 46 percent pass rate, compared to a citywide rate of less than 20 percent, according to Stanley Ng, a former member of the Citywide Council on High Schools, who has been active on this issue. The Wall Street Journal reported that about 60 percent of students in Mascetti's prep program got into one of the schools this year.

Jonathan Halabi, a teacher at the High School of American Studies at Lehman College, a specialized school, and co-chair of the United Federation of Teacher's Specialized High School Task Force, urged reinstating the Discovery program, which allowed promising "disadvantaged" students who narrowly missed the cutoff score for admission to enter a specialized high school after taking and passing a summer course. That program has been discontinued at the larger schools.

Jahaira Flores, a 2010 graduate of American Studies, said she took the test without any preparation and narrowly missed admission. The Discovery program allowed her to get in. "As far as I know every college offers remediation so why not high schools?" Flores said.

The UFT would like all 8th-graders to automatically take the SHSAT unless they opt out, Halabi said. (Now students must sign up for the test.)

Mascetti agreed, calling it  "an excellent proposal." All students take the test at some schools, while at others, "parents don't even know about" it, he said, adding, "High performing students at low-performing middle schools, are not being pushed into the best schools."

Bills have been introduced in the state legislature calling for a change in admissions by reversing the 1971 state law that gave the state authority for admissions to the specialized high schools and established the SHSAT as the sole means of admissions at Stuyvesant, Bronx High School of Science and Brooklyn Tech.

The latest version of the bill was introduced in March and would allow the city to set admissions policies and would establish multiple measures for selecting students, such as grade point averages of applicants, student portfolios and teacher recommendations.

Leaders in the legislature have largely been silent on the issue, as has Gov. Andrew Cuomo. A nonbinding resolution in support of the measure was introduced in City Council last fall but has not advanced.

In March, Chancellor Carmen Farina said the Department of Education was reviewing "a variety of ideas to increase diversity at our specialized high schools" and will "examine changes to admissions policies."

Changes, should they come, would not affect September's incoming class and would probably not affect the class entering in 2016, Hemphill said.

Post updated 4/22 to reflect a 46 percent passing rate on the exam by students in the DREAM program.