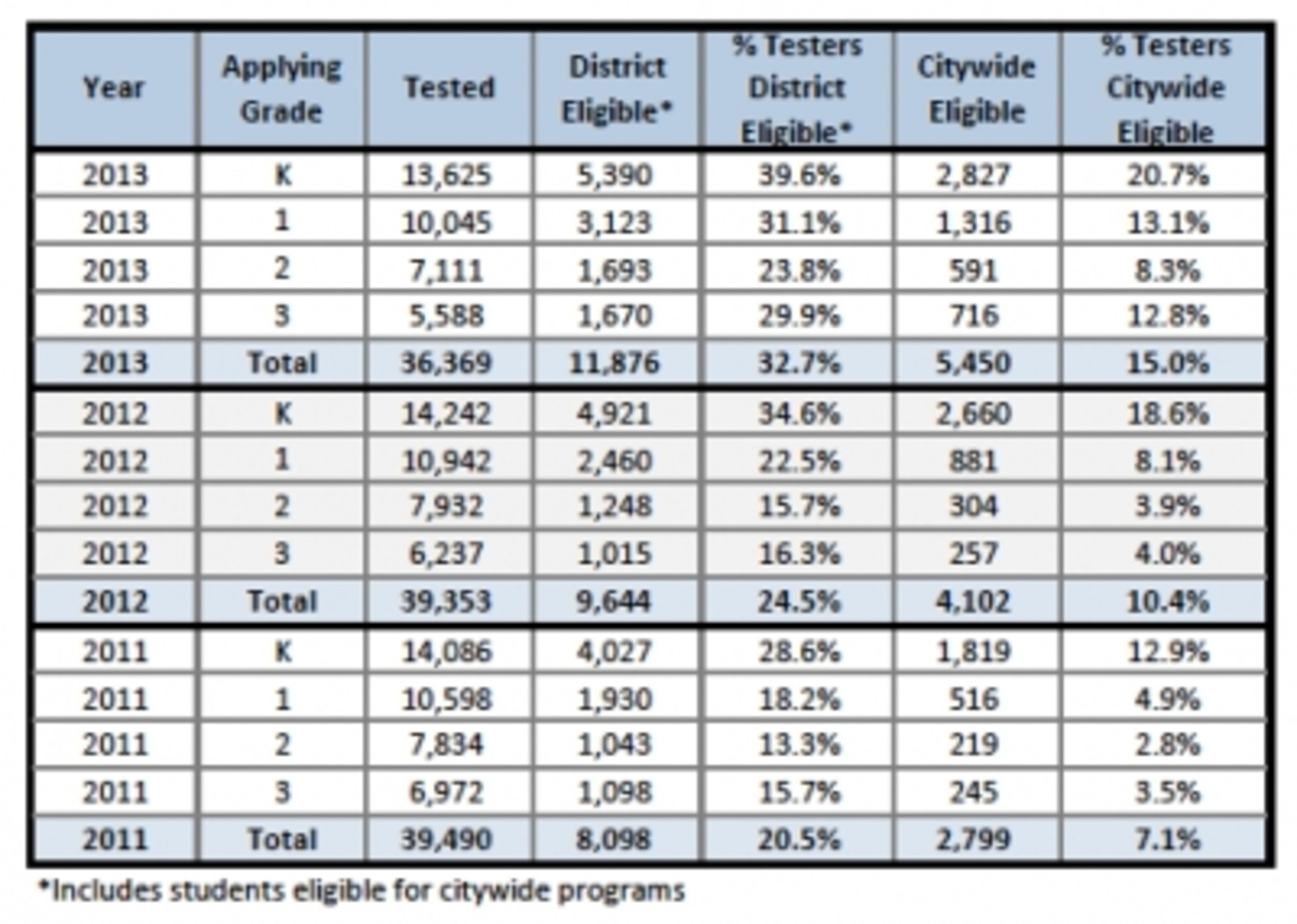 There were thousands of disappointed families when the city finally mailed offers to elementary Gifted and Talented programs on Friday. This year a record number of children - close to 5,500 -- qualified for the five more selective citywide programs, yet only about 300 offers were made, according to the Department of Education. That means there were slots in citywide schools available for only about five percent of eligible students.

Overall, the chances of snagging a seat in either a district or citywide G&T program were slim, especially in districts where there were high numbers of eligible students. Only 68.5 percent of eligible kindergartners got an offer. Since all G&T programs begin in kindergarten, the odds of getting a seat decrease each succeeding year. For 1st grade, 51 percent of applicants received an offer; in 2nd grade, 34 percent got an offer and in 3rd grade, only 29 percent. In total, just 54 percent of applicants in those grades were offered a seat, a significant decrease from the 72 percent offered a seat in 2012. After 3rd grade, placement in G&T programs is based on standardized state test scores.

Parents must accept their offers and register by June 28 (two days after the last day of school) or forfeit their seat.

This year's admissions process was fraught with delays after it was twice discovered that errors had been made by the testing company Pearson in calculating scores on the assessments, one of which was new this year. The offer letters were further delayed when parents filed a lawsuit seeking to have the scores invalidated due to Pearson errors and what they charged was an unfair advantage to siblings of current students. Siblings are given priority in admissions over higher-scoring non-siblings. A Supreme Court judge on cleared the way for the offer letters to be mailed after June 7.

The districts with the highest number of eligible kindergartners were Manhattan's districts 2 and 3. Only 45 percent of District 3's 411 applicants got an offer. Just over half of the eligible applicants in District 2 -- 54 percent -- got offers. There were 459 offers out of 842 applicants in that district.

As in previous years, four districts did not have enough qualifying students to offer a program for incoming kindergartners. Offers were made to 10 or fewer students in District 7 in the South Bronx, District 12 in the central Bronx, District 16 in Bedford Stuyvesant and District 23 in East New York. Those students are eligible to attend programs in other districts.

To qualify for a district gifted program, students must score at the 90th percentile on the assessment. This year the city did not guarantee a place for all those who scored high enough to enroll because, it said, not enough parents enrolled in the past.

"We have found that in past years, many families opted not to take their offer, since it may not have been close enough to home for families with young children," the DOE said in a statement.  "Last year, only 58.5% of families accepted. As such, eliminating the guaranteed offer, which many families likely would not have accepted, contributed to the lower percentage of students receiving an offer this year."

Queens will get two new programs: PS 68 in Ridgewood (District 24) will have new kindergarten and 1st grade G&T as will PS 121 in South Ozone Park (District 28). PS 188 in Bayside (District 26) will take in two kindergarten classes instead of one for the fall. PS 214 in College Point (District 25) will get a new program for 1st-graders.

Students scoring in the 97th percentile and above are eligible for a citywide slot but in reality, all slots are taken up by siblings of current students or those who score in the 99th percentile at the five schools. Parent groups have been lobbying for an increase in citywide programs, but the only change proposed this year was for STEM, the Queens citywide program now housed at PS 85, to become a K-8 school in 2014.

Students who moved to New York City after the deadline to sign up for 2013 testing may sign up now and be tested the week of July 8. See the DOE's website for more information. No word on how many seats might be still available for those students!