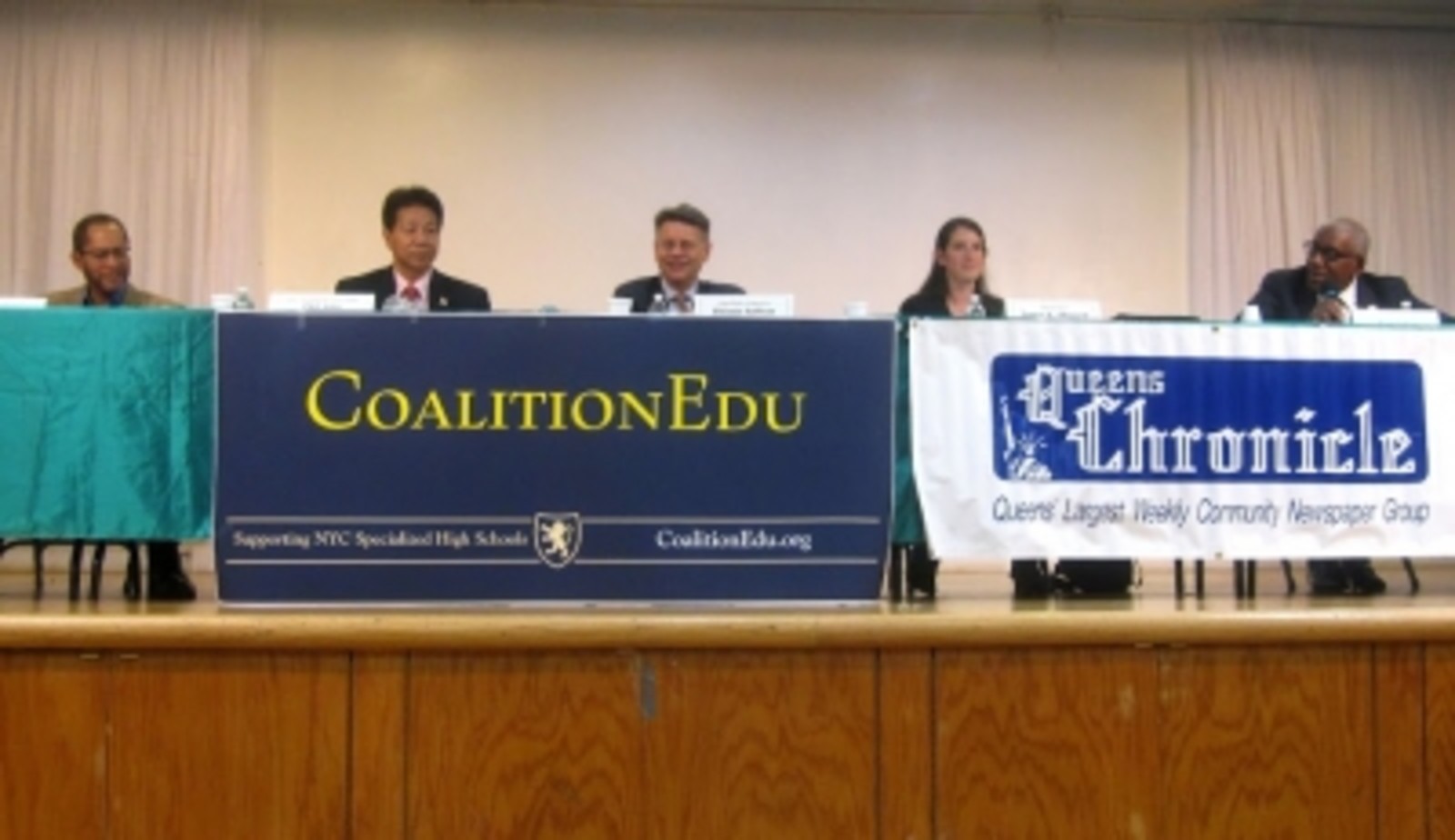 The Specialized High School Admissions Test that thousands of 8th-graders will take this weekend has long been a multiple-choice exam scored by a machine. But there are indications that the new exam students will take starting in in 2016 might have an essay component.

Last month, the city issued a Request for Proposals for a new SHSAT, which is the sole determinant of whether a student gets into one of the eight academically elite high schools. The current contract with Pearson runs out in 2016 so the city must put the test out for bids and sign a new contract with someone to create a test for fall 2016 and beyond.

The new RFP tells prospective bidders that including hand-scored "constructed response and/or essay response" questions would be "desired but not required." If the test does have essays, the RFP goes on to say, the bid must include "information on the items themselves and on how and by whom the items would be scored."

Later on, the document refers again to "shorter written and/or essay responses," saying bidders may "optionally address" them.

In contrast, the old RFP, issued in 2010, makes no mention of an essay or written response. Instead, it calls for a test with 45 verbal questions and 50 mathematical ones, with the verbal section including scrambled paragraphs, logical reasoning and reading comprehension. That RFP foresaw all answers being scored by machine.

The new RFP also calls for translating the test, now given only in English, into 11 languages and aligning it with the Common Core Standards.

Debate has been mounting in recent years between defenders of the status quo—who say the test represents a merit-based system—and opponents—who are concerned by the small number of black and Hispanic children who pass the test.

A final decision on what the new test will look like will not be made until next year. Speaking at a town hall meeting in District 13 on Tuesday, Chancellor Carmen Fariña did not seem familiar with the idea of having an essay on the test and indicated it might be difficult to work one in. As for ways to increase the racial diversity at the schools, Fariña said the department "is looking at how do we better support kids in middle school."

Some alumni adamantly oppose adding an essay, charging that such a change would violate the 1971 state law requiring that Stuyvesant, Bronx Science and Brooklyn Tech admit students solely on the basis of "a competitive, objective and scholastic achievement examination."

At a forum about the SHSAT in Flushing last weekend, Dennis Saffran, a lawyer and Republican politician in Queens who has written about the admission process, praised the current system because it "assures that all that is tested is your merit, your integrity and your hard work." So-called "holistic criteria," he said "are not going to help black and Latino kids. They're mainly going to end up helping affluent white kids like those in Mr. de Blasio's Park Slope."

Janella Hinds, vice president for academic high schools for the United Federation of Teachers, which supports changing the admission procedures, said in an interview this summer that the so-called screened high schools in the city—selective high schools that do not use the SHSAT—have more blacks and Latinos than the specialized schools. But she conceded the system for them is not ideal either. "We have a long way to go," she said.

The Coalition Supporting Specialized High Schools, along with several parents and alumni, has filed an official protest with the Department of Education, calling on the department to amend its RFP and "refrain" from having an essay question or translating the test.

Larry Cary, president of the Brooklyn Tech Alumni Foundation, said the state law creates a quandary for an essay. "The only objective way to [score] it is not to review it as an essay" but whether it meets certain criteria on a rubric. "They're proposing something that will either be highly subjective and so illegal under state statute" or something that "is no measure of a person's ability to write," Cary, who is an attorney, said. "It doesn't make any sense unless you're talking about politics."

David Bloomfield, a professor of educational leadership, law, and policy at City University of New York, believes there could be ways to make an essay objective. "Sentence, paragraph, and essay structure; punctuation; and grammar are all able to be objectively evaluated." He added, "It also could depend on how one defines objective, objective might be interpreted as independent, meaning grading would be done by someone without bias."

The City Council has entered the fray. Several councilmembers, including Inez Barron, Brad Lander and Education Committee chair Daniel Dromm, have sponsored a non-binding City Council resolution in support of a state bill that seeks to upend the current system. There is no specific mention of an essay but the bill, introduced last spring, would return control of the admissions process to the city and calls for the schools to admit applicants on the basis of "multiple measures of student merit" including grade point average, attendance, scores on an admissions test and the state standardized tests.

The de Blasio administration has repeatedly expressed concern about the scarcity of black and Latino students at Stuyvesant and the other specialized high schools. Earlier this year, the administration indicated it might try to change the admission policies at five new specialized high schools that are not explicitly covered by the state legislation.

The DOE is continuing to look at the admissions issue, press secretary Devora Kaye said in an email Thursday, writing, "In the coming months we will continue to gather perspectives from educators, experts and advocates to look at ways to address the gap that has left so many of our black and Latino students out of specialized high schools."