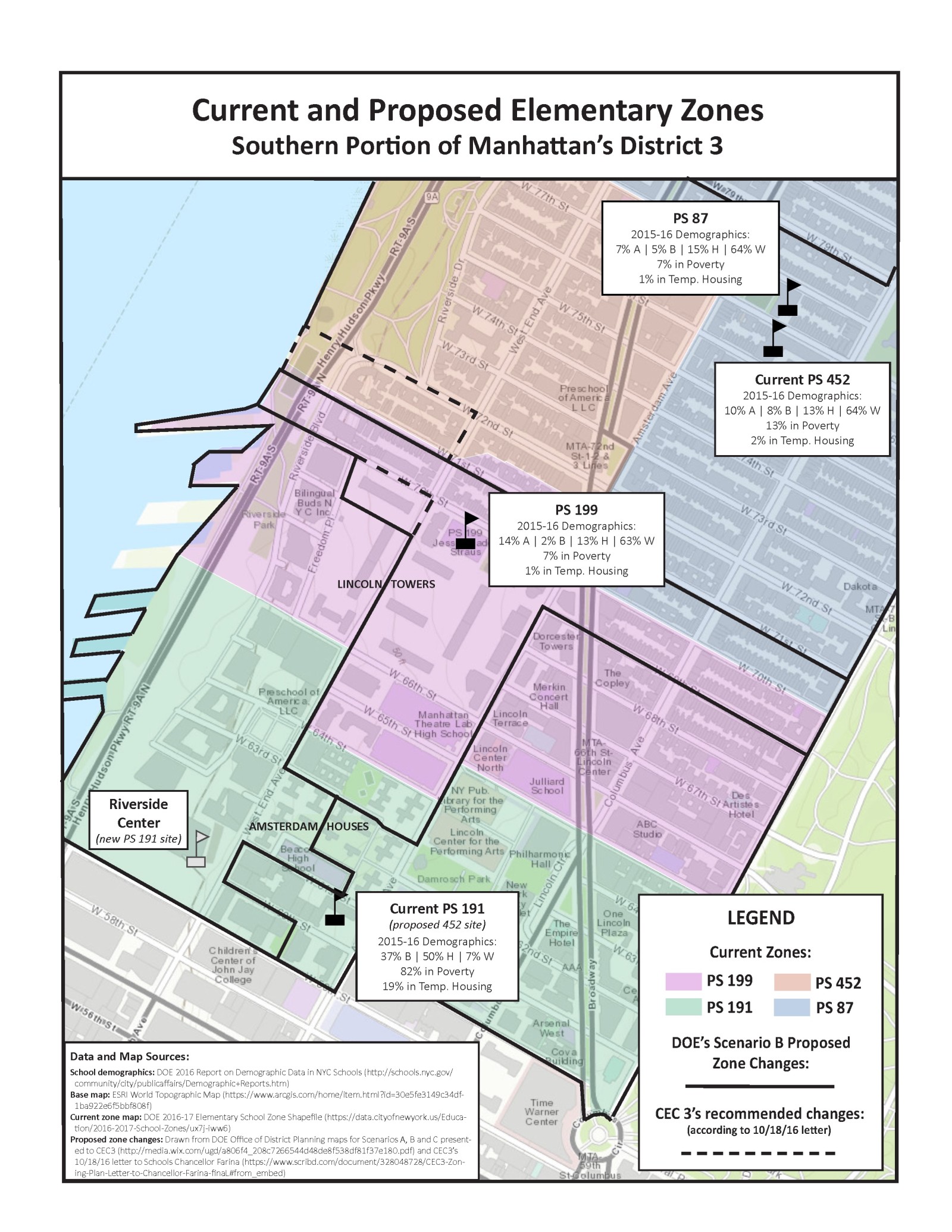 After two years of contentious public meetings, the Community Education Council, an elected panel of parents, has come up with a courageous and long overdue plan to ease overcrowding and foster racial and economic integration of three elementary schools in District 3 on Manhattan’s Upper West Side. It is a bold attempt to balance competing interests and to resolve one of the city’s most intractable social problems. City Hall and the City Department of Education (DOE) should back the plan, which the CEC devised only after it found every zoning plan the DOE offered to be unacceptable. City leaders should also take immediate, aggressive steps to address legitimate concerns raised by local residents.

After weighing multiple perspectives from often angry members of the public, the CEC, responsible for approving attendance zone lines, has taken the unusual step of coming up with its own plan. This plan could end waitlists at the most popular schools and give hundreds of children better school facilities than they currently have.

If successful, the plan will also break up the high concentrations of poverty that have made it so difficult for one school, PS 191, to gain traction. In the past, most of the children from Amsterdam Houses, a public housing development, have been assigned to PS 191; under the CEC plan they would be assigned to three different schools, all a short walk from one another.

Here are the details of the CEC proposal: Children now attending PS 191 would move from their current building into Riverside Center, a new building in a residential high-rise opening in September 2017. New kindergartners would come from a new attendance zone that includes parts of the current zones for PS 191 and 199, a highly successful school serving mostly well-off white children. More than half the new kindergartners would come from the current PS 199 zone

Children from cramped PS 452, another popular school serving mostly well-off white children, would move into the building vacated by PS 191, giving it better facilities, such as a playground, a media center, a library, a gym and its own cafeteria. The school could increase its enrollment (and, consequently, its budget) and offer more extensive services, especially for children with special needs. About 280 current students would have a new school commute, in some cases as long as a mile. New attendance zone lines would, however, put new students closer to the school.

The overall size of the PS 199 zone would shrink, but the school would accept some new kindergartners from Amsterdam Houses. If the plan is successful, all three schools would eventually have a better mix of children of different races, ethnicities, and family incomes. Low income children would make up 15 to 25 percent of each school. Minor changes for other District 3 schools would ensure they could accommodate all children in their attendance zones in future years.

These broad strokes were present in some of the scenarios presented by the DOE, but the CEC said they were based on unrealistic enrollment projections and did not go far enough to ensure a balance of different races, ethnicities, and income levels among the schools. The CEC’s plan extends the DOE’s proposed zones slightly to ensure robust and diverse zones for all affected schools (our estimates of the CEC’s extensions shown here by the dotted lines).

Meanwhile, PS 191 has room to spare. While the school has improved in recent years, DOE data shows fewer than half of public school pupils who live in the zone choose PS 191. The rest go to charters, gifted and talented programs, or other schools that have space available. Located just down the block from PS 191, the new Riverside Center School offers the possibility of reshuffling the deck in a way that might help all children.

Opposition to the plan has come from two quarters: Homeowners in Lincoln Towers, a six high-rise co-op apartment complex on West End Avenue; and current parents at PS 452.

Lincoln Towers has long been zoned for PS 199, and some homeowners are furious that several buildings would now be zoned for the new Riverside Center School. They are not convinced that the new school will be as good as PS 199. They fear, with some justification, that simply moving PS 191—the children, the staff, and current principal—to a new building, as the CEC plans recommends, won’t significantly change the tenor of the school.

By all accounts, PS 191 Principal Lauren Keville, hired in 2014, has improved the school’s climate and discipline significantly. She is popular with parents and staff. She has introduced new writing and math programs. An invigorated PTA, made up of parents of different races, is working hard to promote the school. That said, turning a school around is enormously difficult, particularly in this politically charged environment. As our recent report on successful school integration shows, it is much easier to start a new school than to undo a longstanding bad reputation. The DOE must do whatever is necessary to give Riverside Center a fresh start.

For the CEC plan to be successful, the DOE must persuade doubtful parents that the school in the new Riverside Center will be of the same high quality as the most popular schools nearby. It takes more than a new building to make a school successful: the principal must articulate a vision and make parents of different races, ethnicities, and income groups feel welcome and valued. That means selling the school to the community by attending meetings in churches, synagogues, child care centers, and with tenant groups and co-op associations. To date, DOE officials have failed to conduct the outreach to the parents they will need for any rezoning plan to work.

The concerns of PS 452 parents are also understandable. Moving PS 452 staff and children to another building will certainly be disruptive. The City should provide yellow bus service to ease the transition. It should be noted, however, that some 35 percent of current PS 452 students live outside the school’s existing attendance zone; roughly 100 of them commute from another school zone, including some who live closer to the new school site than to the old.

Mostly absent from the public debate are the voices of parents from Amsterdam Houses. Given the ugly tenor of the public meetings—where white homeowners shout that their property values will suffer if their school zone includes public housing—it would be understandable if parents in Amsterdam Houses worry about sending their children to schools with mostly well-off children.

All three elementary school principals must address openly the issue of how they will ensure children (and parents) of different races, ethnicities, and income levels will work and play together productively and how they will deal with any problems that arise. The schools should encourage parents of different backgrounds to serve in the PTAs; organize informal get-togethers, like picnics, over the summer, so new students and parents can meet one another; and also include budgeting for counselors and social workers. Integration can work, but it takes a concerted effort on the part of all concerned. No plan will please everyone, but if a critical mass of parents buy into the proposal it can work

The District 3 CEC, made up entirely of volunteers, has worked diligently for two years to redraw zoning lines in a way that improves educational prospects for as many children as possible. Now, City Hall and the DOE must respond with its own plan that provides the leadership and support that will make the CEC’s work a success.