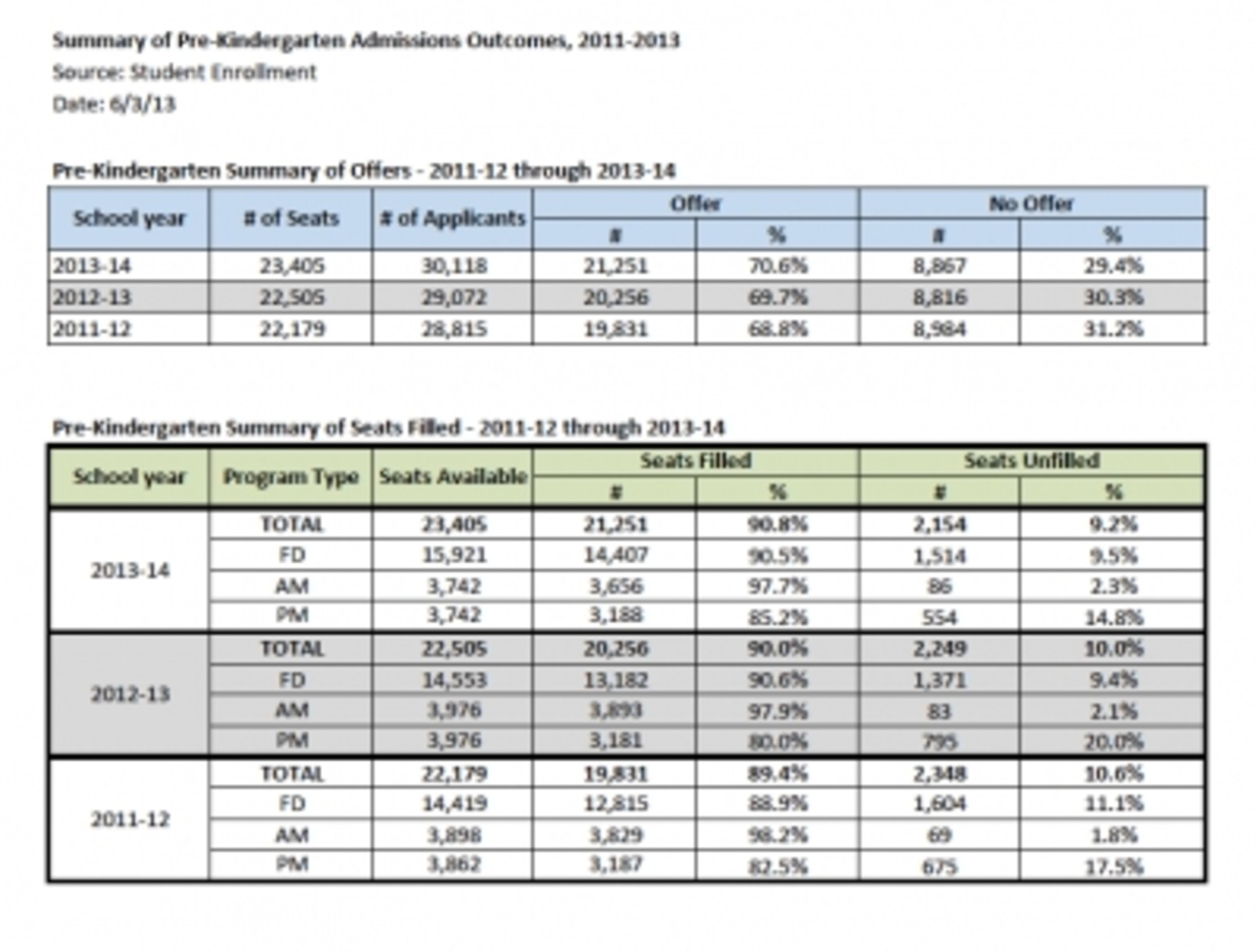 Almost one-third of the families whose four-year-olds applied for pre-kindergarten did not win a spot in any public school program, according to the Education Department, which sent offer letters to families this week.

This spring, 30,118 kids applied for 23,405 full and half-day seats in public schools and 29.4 percent of them did not get an offer. That percentage is slightly lower than last year, when 30.3% did not get pre-k offers for school-based programs.

The DOE is offering about 1,500 more school-based, full-day seats for the 2013-2014 school year than it did last fall, and the city plans to continue to grow the number of pre-k seats by a total of 4,000 in the next few years, the DOE spokesperson said. But even those additional seats would not satisfy this year's demand. Furthermore, the number of families seeking public school pre-k seats is trending up: from 28,815 in 2011 and 29,072 in 2012 to more than 30,000 this year.

If your child is one of the nearly 7,000 kids who did not get a pre-k offer, you still have some options. About 1,500 full-day pre-k seats remain unfilled at public schools, according to the DOE. Nearly all of the half-day morning seats are filled but 600 seats remain unfilled in afternoon pre-k programs. A list of schools with open seats is available on the DOE website [PDF]. And thousands of seats are still available through programs in Community Based Organizations (CBOs), according to a DOE spokesperson, who said that more than 60% of the city's pre-k seats are provided by CBOs.

Open seats in Bronx districts 9 and 10 are scarce but the borough's other districts -- 7, 8 and 12 -- still have room in a number of full-day programs.

In Queens, District 30 has openings in a few half-day programs and one full-day program. District 27 has many seats still open. A few schools in districts 25, 28 and 29 have openings as well.

Apply directly to schools that have open seats.

If you're hoping for a spot in a school that is full now, don't give up. There is usually lots of movement over the summer as families move or choose other pre-school options. To add your child's name to a waitlist, call the school after June 12. Waitlists are handled locally at schools, not centrally at the DOE. Applying to pre-k at a CBO is a separate process and you must call the organization directly to see if it has space. See the pre-k directory for a list of CBOs offering pre-K and contact information.

Families that get offer letters must register by June 19 or will forfeit their seats. You and your child will need to visit the school with certain documents to register. See thepre-k directoryfor specific instructions.