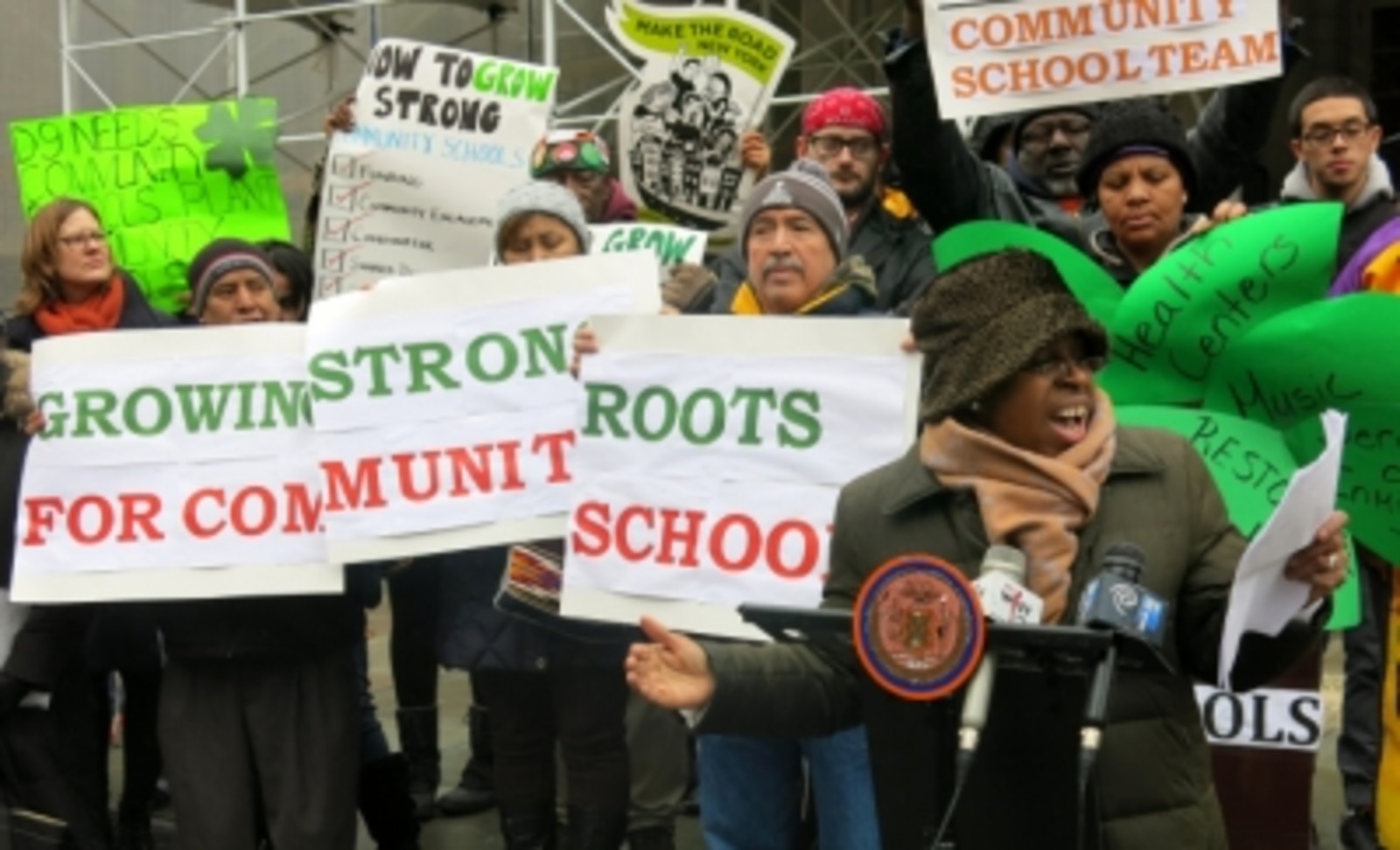 (Originally posted on Chalkbeat by Patrick Wall on December 10, 2014)

The same advocates who helped convince the de Blasio administration to saturate dozens of needy schools with support services now want to make sure the city pulls off its plan.

Even as they applauded Mayor Bill de Blasio for promising to convert 128 schools into service-rich “community schools,” they urged the city on Wednesday to adopt formal guidelines to make sure the schools have similar standards and practices. Other cities that have embraced this model, such as Cincinnati and San Francisco, set official community-school policies, the advocates said.

The call for guidelines, which advocates wrote themselves and said they will ask the city’s education-policy board to adopt if agency officials do not, reflects the delicate position that community school proponents find themselves in. After failing to sell the previous administration on this model, they want to show their support for one that has finally embraced it, while making sure that it is rolled out successfully and with the input of parents and advocates. And they want to guarantee that the community school model continues even after their ally leaves office.

“The community school train has left the station and is moving, and we need a policy to codify it,” said Claudette Agard, a member of the Coalition for Educational Justice, an alliance of advocacy groups that unveiled the guidelines during a press conference Wednesday outside City Hall. “It would serve to validate and uphold community schools as a model for this administration and beyond.”

Laid out in a one-page policy paper that was endorsed by two-dozen community groups and the city teachers union, the guidelines list three principles of the community school model: strong academics, support services, and parent participation. They also list certain features that advocates say are essential for every community school, such as decision-making committees that include parents and students, and a full-time service coordinator.

The city has official policies around student promotion and translation services for parents who don’t speak English, for example, and advocates want matching policies for community schools. CEJ members are discussing that possibility with education department officials, they said, but if the agency does not adopt them then the advocates said they will ask the city’s Panel for Educational Policy to do so next month. They are also considering a push for new community school-focused Chancellor’s Regulations.

A spokesperson said the education department would partner with various stakeholders as it expands the number of community schools, but did not say whether the city would consider adopting CEJ’s guidelines. In a statement, Deputy Mayor Richard Buery called community schools “a cornerstone” of the administration’s education agenda.

“We look forward to working with parents and advocates across the city to make community schools work for all of New York’s kids,” said Buery, who is overseeing the expansion.

In some ways, de Blasio’s plan has already surpassed advocates’ expectations, not least because he is in the process of creating more community schools now than he initially promised for his entire first term. The plan also calls for the schools to receive full-time site coordinators and for the majority of the services to go to struggling schools — two of CEJ’s key demands.

Still, some advocates have expressed concern about how rapidly the city is rolling out the initiative, and have called for a larger role in the planning process. Most worrying to some is that city officials have not gone into detail about they will make sure the new community schools have strong academic programs to go along with the extra support services.

“We love social services,” said Zakiyah Ansari, advocacy director of the Alliance for Quality Education who is part of the city’s community-school advisory board. “But at the same time, we want to make sure our children are reading and writing.”

Other community school proponents have raised questions about the city’s plan to apply the model to 94 of its lowest performing schools, which few other districts have tried. Besides the fact that the model has a mixed record of improving student performance, the city’s plan would compel struggling school leaders to carry out a time-consuming strategy that requires close partnerships with service providers and parents.

Esperanza Vazquez said she and other parents helped plan every aspect of M.S. 327, a recently opened Bronx community school, from the building design to the after-school program to the lunch menu. But she said such collaboration is rare, and wondered whether the leaders of low-performing schools who are told they must develop community schools will be so welcoming.

“I am worried about that,” Vazquez, whose son is in eighth-grade at M.S. 327, said through an interpreter. “Because it’s really hard to develop that kind of relationship between parents and principals.”

Click hereto read the guidelines proposed by the Coalition for Educational Justice.