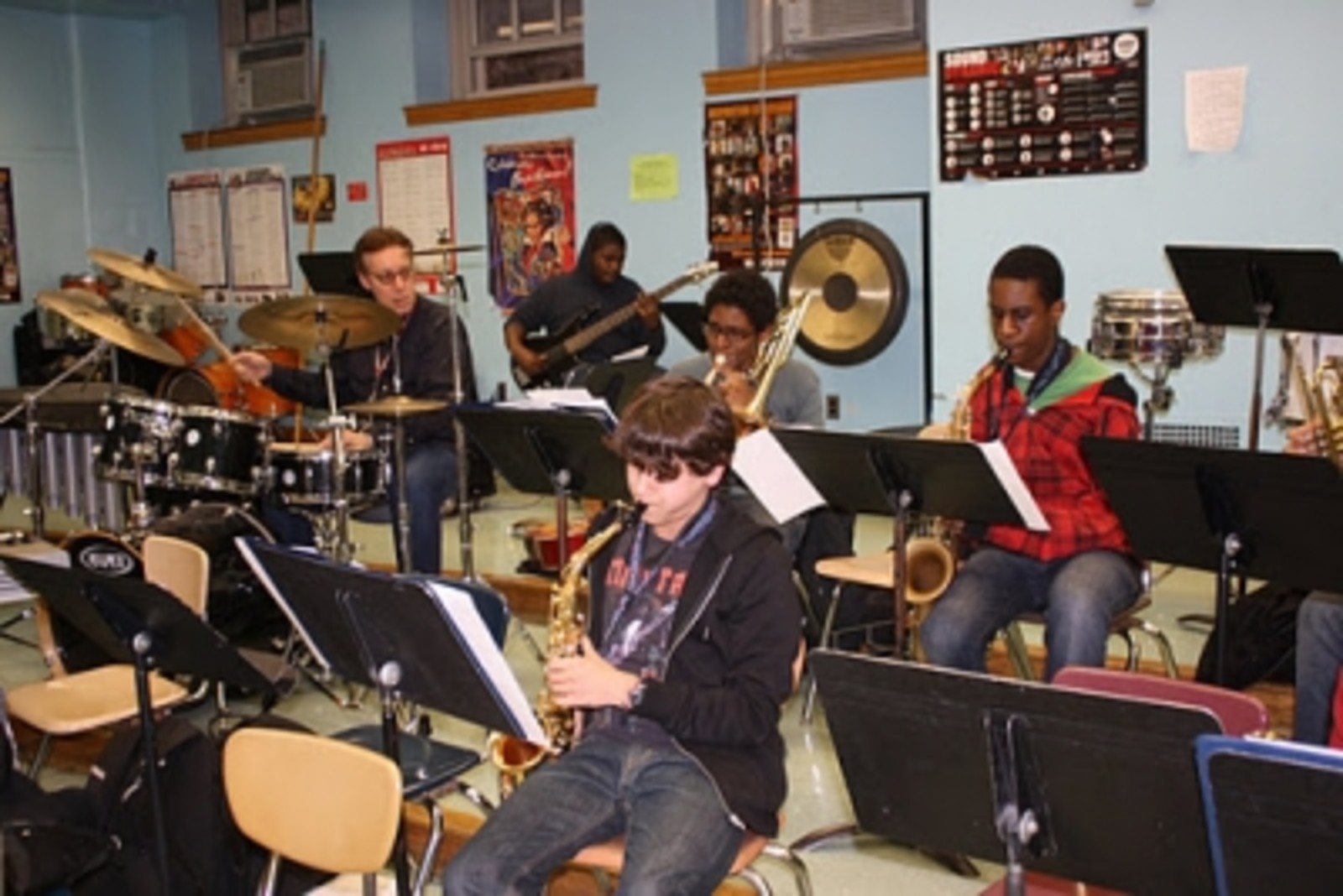 The Department of Education is forcing most of the city’s selective high schools to accept a certain percentage of special needs students, even, in some cases, if they don't meet the eligibility requirements. Both general and special education students were assigned to top performing arts programs even though they didn't audition, infuriating some parents whose children did.

In all, the Department of Education has assigned students not chosen by the schools to about 70 different screened programs for the 2013-14 academic year, said Marc Sternberg, senior deputy chancellor for strategy and policy. Sternberg said most of these programs were assigned special needs children; a few schools with unfilled seats were also assigned general education students. In a follow-up story, the New York Post reported: "about 960 general-ed kids and 300 special-ed students were assigned," to 71 schools.

This policy is part of an effort to give children with disabilities more access to demanding academic and arts programs and to ensure that screened schools get the "right number" of students, said Sternberg.

“This is about equity and access,” Sternberg said in a telephone interview. “We want to make sure that all students across the spectrum have access to these very fine schools.”

At Frank Sinatra High Schoolin Queens, a performing arts school that admits students by audition, the DOE assigned 25 general education and 26 special education students who either did not audition or did poorly on the audition, said principal Donna Finn.

“I’m infuriated,” Finn said. “To call schools ‘audition’ and put kids in who did not audition is a travesty. It’s just despicable.”

Parents at Talent Unlimited, a performing arts school in Manhattan, say at least 40 general and special education students who did not audition or meet the school’s admissions standards have been assigned to the school’s musical theater and instrumental programs. “We don’t even know if these kids play an instrument or read music,” said one parent, who asked to remain anonymous.

Exempt from the new quotas are Fiorello LaGuardia High School of Music and Art and Performing Arts, which admits students by audition, and the eight schools which admit students according to the Specialized High School Admissions Test (SHSAT), including Stuyvesant High School and Bronx High School of Science. Admission to these schools is governed by state law, not DOE regulations.

In the city’s complex system of high school choice, students rank schools in order of preference, while the selective schools rank students based on admissions criteria that may include an audition, an interview, an essay, an in-school test, grades and attendance. A computer matches students and schools based on their preferences. The most popular schools have far more applicants than seats available. Each year, about 8,000 students receive no match in the first round of admissions and must enter what is called the “supplemental” round, choosing from schools that still have seats.

Last year, the DOE set “targets” for the city’s more than 400 high schools to “rank” a certain number of students with disabilities, based on the percentage of special needs children in each borough--for the Bronx, 15.5 percent; Brooklyn, 11 percent; Manhattan, 12.5 percent; Queens, 9.4 percent; and Staten Island 12.5 percent. The policy was designed, in part, to address the concern that some schools were assigned disproportionate numbers of children receiving special education services while others enrolled almost none.

The quotas only include students with moderate disabilities whose IEPs (Individualized Education Program) call for a “self-contained” (a class with special needs children only) or “Integrated Co-Teaching" class” (classes with two teachers and a mix of special needs and general ed kids). Students with milder disabilities who receive part-time extra help called Special Education Teachers Support Services (SETSS, also called resource room) or 504 accommodations, such as extra time on tests, are not included, and do get no preference in admission. Likewise, students with severe disabilities who are part of so-called District 75 or citywide programs are not included for the most part, although Finn said the DOE assigned two District 75 students to Frank Sinatra.

Twenty-seven selective schools were initially exempt from the special ed quotas, but were required to meet them this year. Some of the schools did not meet their targets, so the city has decided to retroactively relax--and, in some cases, lift–admission requirements.

Bard High School Early College in Queens -- like its counterpart in Manhattan -- is one of the most academically demanding schools in the city. It selects students based on standardized test scores of 3 and 4, stellar attendance, a reading and writing assignment, and a short multiple choice math tests. Students who do well are invited to interview.

The school has almost no special education students enrolled, said Admissions Director Olga Carmona, because very few have applied who meet their criteria.

“It’s been tricky. It’s been difficult,” Carmona said. “We don’t want to take in students who we don’t think will flourish here. We want to make sure we don’t have them drowning here.”

Carmona said the Queens school ranked five IEP students in the first round but all were matched to other selective schools. “We’re all fighting for the same kids,” she said. She said the DOE told the school to “relax their screen,” or slightly change some of the requirements, to attract a wider pool of applicants.

The school did that–testing kids who scored a “2” on state exams, and whose attendance was less than stellar. Staff members also gave kids additional time on the exams–even beyond what might be mandated on their IEPs, said Carmona. They allowed kids to be tested at their own schools, rather than test them at Bard, so they would feel more comfortable, she said. Still not enough met even those relaxed standards, she said.

“We didn’t change the exam but we made it more comfortable to be there. The faculty feel that students have to do well on the exam,” she said. “It’s not that we don’t want special education students. We want students who will do well here.” She said both Bard campuses are still hoping to attract qualified special needs students for next fall. Interested students should contact the school.

Special education attorney and coordinator for PIE (Parents for Inclusive Education) Jaclyn Okin Barney said she finds it hard to believe that screened schools can’t find enough bright special education students to meet their quota, but, she continued, "I am very impressed to see that Bard advertised that they are giving accommodations on their exams."

Beacon, one of the most sought after schools in the city, also fell short in accepting special needs students. It has had an ICT class for several years, but when it didn’t meet its target, the DOE assigned them a few students whom Beacon had not ranked although they were “appropriate” for the school, said Parent Coordinator Judy Moore.

The Professional Performing Arts School in Manhattan was assigned a few students who didn’t audition, but Principal Keith Ryan said schools have known for more than a year about the DOE mandates.

“There are absolutely no surprises about this situation,” Ryan said. He explained that the DOE “relaxed the screen” to fill his school’s quota of special needs students. He says PPAS tried to meet Manhattan’s target number but, like Bard and Beacon, the school fell short.

Kids practice for months and compete against thousands of other kids to get into the city’s performing arts schools. Parents say it’s unfair that students who auditioned should be passed by. And they fear students who did not meet audition requirements may struggle in school. “If they’re not confident in their studio, they’re miserable in this school. This is a pre-conservatory program,” Finn said of Frank Sinatra.

Dmytro Fedkowskyj, the Queens representative to the Panel on Education Policy, said the DOE policy “diminishes the achievement of the students who auditioned and earned a seat” at the performing arts schools.

“It isn't fair to the student or the school community when the DOE creates this type of audition environment, establishes entrance rules and then circumvents these same rules at their leisure,” he said.

Sternberg said Frank Sinatra did not fill it seats with enough students whom the school had ranked, so the DOE assigned more students to increase enrollment.

“If we only looked at test scores, we would automatically not list a lot of students with IEPs,” Bailey said, referring to the list of students the school sends the DOE’s office of enrollment to match with high school applications. But the school looks at a variety of factors including grades, attendance and an online admissions activity when selecting incoming students, she said.

Still, schools without experience integrating special needs children say they are ill-prepared to help children with disabilities thrive.  “We do not have an ICT, self-contained or D75 program” said Finn at Frank Sinatra Donna. “This is wrong for all these kids.”

The DOE plans to “have conversations one school at a time to make sure we develop a plan that works,” said Sternberg. “I have a lot of confidence in the principal and faculty to work their magic.”

Tonight, April 23, at 6:30 pm, the PTA at Talent Unlimited is hosting a meeting to talk about the issue. A PTA member said that parents from other performing arts schools are welcome to attend.

Updated 4/24/13 to clarify the numbers of general and special education students admitted to screened schools.