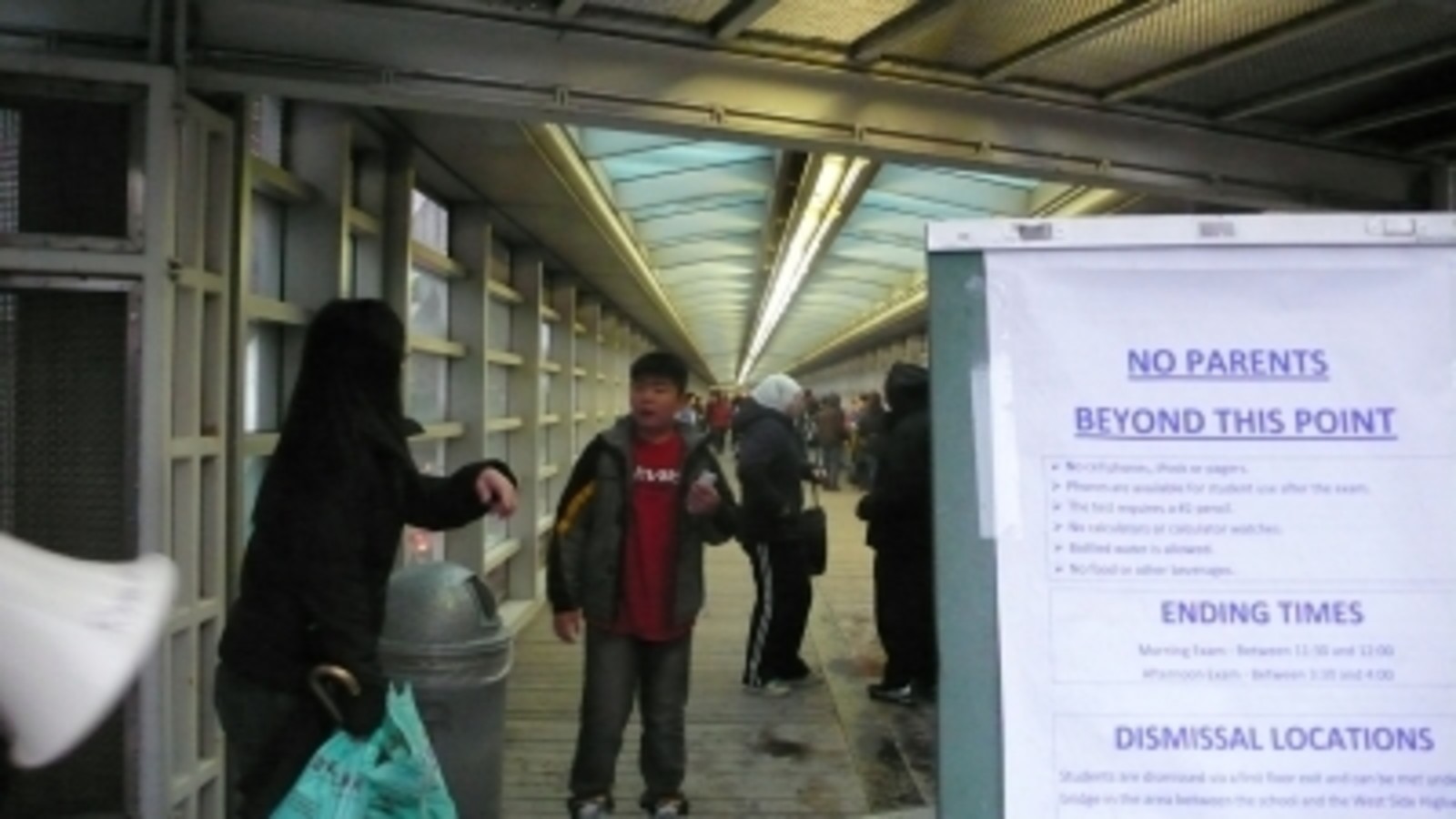 There's been lots of talk about changing the admissions criteria for the specialized high schools, but at least for this year, the Specialized High School Admissions Test Oct. 25 and 26 will same as it's always been. Thousands of 8th graders will take the exam that is the sole determinant of who gets into one of the eight academically demanding schools, such at Stuyvesant and BrooklynTech.

Next year, there is the possibility of change. Mayor Bill de Blasio have criticized relying solely on the test. "I do not believe a single test should be determinative, particularly for something that is as life-changing for so many young people," de Blasio said in June.

After years of declining black and Latino admissions to the specialized schools,, pressure has increased to scrap the test entirely or use it in combination with other factors, such as middle school grades or scores on the state standardized tests.

It's too soon to say how likely any changes may be. Entrance to Stuyvesant, Bronx High School of Science and Brooklyn Tech is governed by state law, and it's kawmmen

Many who support the existing system point out that the while schools may not be racially diverse, they are economically diverse, with high percentages of student qualifying for free and reduced lunch.

The statistics on race, though, prompted the NAACP Legal Defense Fund tofile a complaint with the US Department of Education's Office for Civil Rights in 2012 challenging the use of the single test to determine admission. While the office has not ruled on the complaint, the move for change has gained momentum--and opposition from other quarters.

That same month, bills were introduced in the state legislature calling for changes in the admissions procedure. One called on the city to set "multiple measures of student merit" such as grade point average, attendance, and state and school test scores." Another would require that the number of seats in the specialized high schools be proportionate to the number of high school students in each borough. Both bills were referred the education committee but no action was taken before the legislature recessed for the summer.

If it passed either one, the legislature would, in effect, be repealing the bill it passed in 1971 enshrining the test as the sole means for admission. The debate then bore striking similarities to today's. Chancellor Harvey Scribner had appointed a panel to look into whether the test culturally was biased against black and Puerto Rican students. Fearing he might abandon the exam, principals, parents and alumni of the schools pushed the state to step in. They argued that "without such protection the schools face possible 'destruction,'" The New York Times reported at the time.

Today many alumni of the schools insist the schools still require that protection. "Eliminating reliance on the SHSAT runs the risk of erasing what is different about the specialized schools and making them look like others in the system. We believe this is the wrong direction," Brooklyn Tech alumniwrote in a white paper. And in a statement issued in June, Bronx Science alumni came out strongly against the bill calling for multiple admission criteria, describing the current admissions process as "a pure meritocracy, with one standard that is transparent and incorruptible."

The test "is impartial and transparent and its competitiveness is essential for dedicated students seeking admission to a rigorous four-year curriculum," says the Coalition Supporting NY Specialized High Schools, a group started by David Lee, a Brooklyn Tech alumni.

The issue has attracted widespread attention and concern in the Asian community. Two forums in Flushing this spring drew large number of people, largely Asians. At one sponsored by the Asian American Bar Association, parents and alumni came to the microphone to say that Asian students worked hard to gain admission to the schools and that no other method would be as fair as the current test.

For example supporters of the test argue that middle schools grades would not be as fair a measure because middle schools vary so widely -- work that might earn a student an A at one school could barely qualify the student for passing at another.

Those in favor of the test say is the problem is not with the test but that New York does not prepare so many of its students for it. In their white paper, the Brooklyn Tech alumni say, "Increasing the enrollment of African American and Latino students in NYC's specialized schools is important" and urge the city not to scrap the test but to improve educational opportunities for those students in middle and elementary school.

But opposition to the test appears to be building, spurred by concern about high stakes testing as well as the lack of racial diversity at the schools. The NAACP complaint charges that the city Department of Education "has never shown" that relying on the test "validly and reliably predicts successful participation in the programs offered by the Specialized High Schools." It also notes that many educators advise against using any single test to make a decision that has a major impact on a student.

The United Federation of Teachers, which had a group of educators from the specialized schools study the admissions rules, agrees the test is not a good indicator of success. "These educators felt very strongly that the test was separate and apart from what students actually have to do at these schools," UFT executive vice president for academic high schools Janella T. Hindstold Insideschools.

Grades, on the other hand, have some validity, she said: A student who performs well, even at a bad school, she said, may well have "grit and perseverance" and that student, Hinds believes, , " "is going to do whatever is needed to be successful."

Given the vagaries of the state capitol, how this will play out in Albany is virtually impossible to predict. De Blasio and Fariña could change the admissions system at the five specialized high schools created under the Bloomberg administration --Brooklyn Latin; High School for American Studies at Lehman College; High School for Mathematics, Science and Engineering at City College; Queens High School for the Sciences at York College; and Staten Island Tech -- because the state law does not apply to them. However, there are no indications de Blasio plans to do that -- at least not yet. The Specialized High School Student Handbook for 2014-15 lists the test as the sole means of criteria for all of them. (The Department of Education did not respond to a request for comments.)