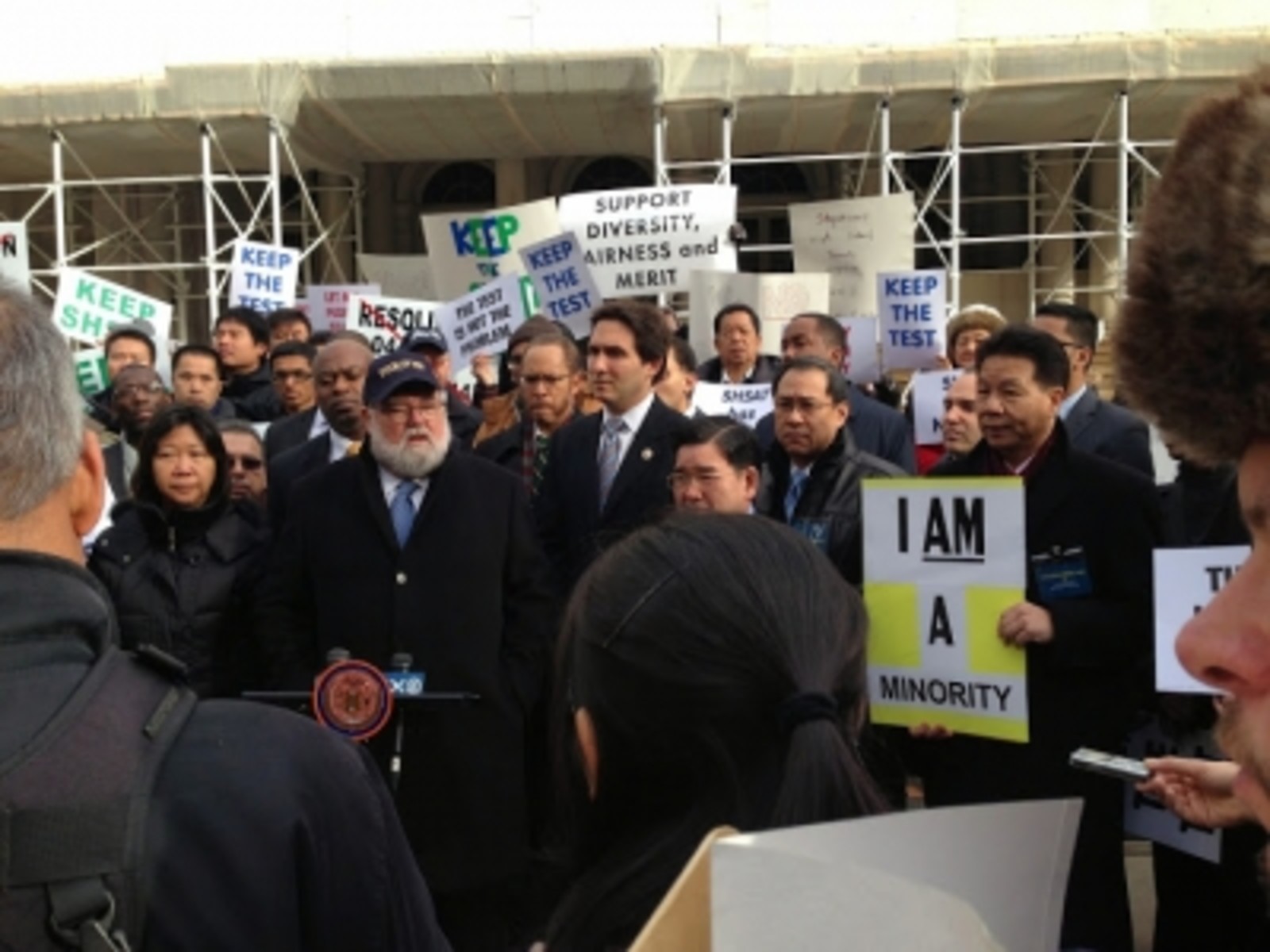 The New York City Council took up the issue of racial segregation in the city's public schools today, but concern about the lack of diversity at eight schools—the academically elite specialized high schools that admit students solely on the basis of one exam—all but drowned out discussion about 1,700 other schools.

Most of the debate at the education committee hearing centered around a nonbinding resolution, offered by City Councilwoman Inez Barron, calling for the state government to change the 1971 law that makes the Specialized High School Admissions Test (SHSAT) the sole criteria for admission to Stuyvesant, Bronx High School of Science and Brooklyn Tech. (The city also uses the test to determine who gets accepted by five other specialized high schools created since the law was passed.) Instead, it says, the city should use "multiple objective measures of student merit," such as grade point average, attendance and state test scores, as well as some type of exam.

Mayor Bill de Blasio has called for changes in the admissions procedures for the specialized schools, which have only a small number of black and Latino students. Schools Chancellor Carmen Fariña has been more cautious, saying on Staten Island last spring that she wanted to improve diversity at the schools without "diluting the experience."

At the hearing, Department of Education officials continued to be vague. Ursulina Ramirez, chief of staff to the chancellor, declined to tell the committee today whether she supported Barron's resolution. "We generally don't comment on resolutions," she said.

In her prepared remarks, Ramirez said the Dream program, a 22-month curriculum designed to help promising low-income middle school students prepare for the test, had good results but that, because of funding issues, it would not expand beyond the current 1,450 seats. Department officials also said the Department of Education sought to tell more students and their families about the specialized high schools and the test, focusing on the top 15 percent of students at each school in the city.

Beyond that, there were few, if any specifics. "This administration is taking a deep assessment of what we want to do" about specialized high school admission, Ramirez said. Later she said the DOE is doing a lot of research on the best methods to select students. "There are pros and cons of whatever decision is made," she said. And when Councilmember Mark Weprin proposed that all students take the SHSAT—they now must register for it—Ramirez said, "It's a possibility."

Proponents argued the test is a fair, objective and transparent means to find high performing students. Those calling for multiple criteria countered that it is wrong to rely on a single test for such an important decision. They charged that this particular test is not aligned to what students learn and favors children who take classes to prepare for it.

Regarding the test, much debate focused on what other criteria might come into play and how that might affect demographics at the schools. "It really depends upon the criteria we look at," said Ainsley Rudolf, of DOE's Office of Equity and Access. He added that the criteria should not be subjective.

But many of those supporting the tests said they feared that the multiple criteria might include such items as teacher recommendations and extracurricular activities—neither of which is mentioned in the resolution. Others mentioned that manyschools that do use multiple criteria also do not have large numbers of black and Latino students. "I want to make sure we don't do a quick fix but actually address the problem," said Councilmember Jumaane Williams, a Brooklyn Tech alumnus.

The hearing by the Education Committee also considered two other measures. One would require the department to report annually on its efforts to promote diversity and the results of its effort at charter schools as well as regular district schools. Ramirez said the administration supports that because the reports "will be a useful tool." Another, a nonbinding resolution, calls for DOE to make diversity a priority in making decisions on such issues as admissions and zoning for schools.

The focus on diversity comes in the wake of findings that about half of the city's public schools are at least 90 percent black and Hispanic and a report by the Civil Right Project at UCLA which concluded that New York state has the most segregated schools in the country.