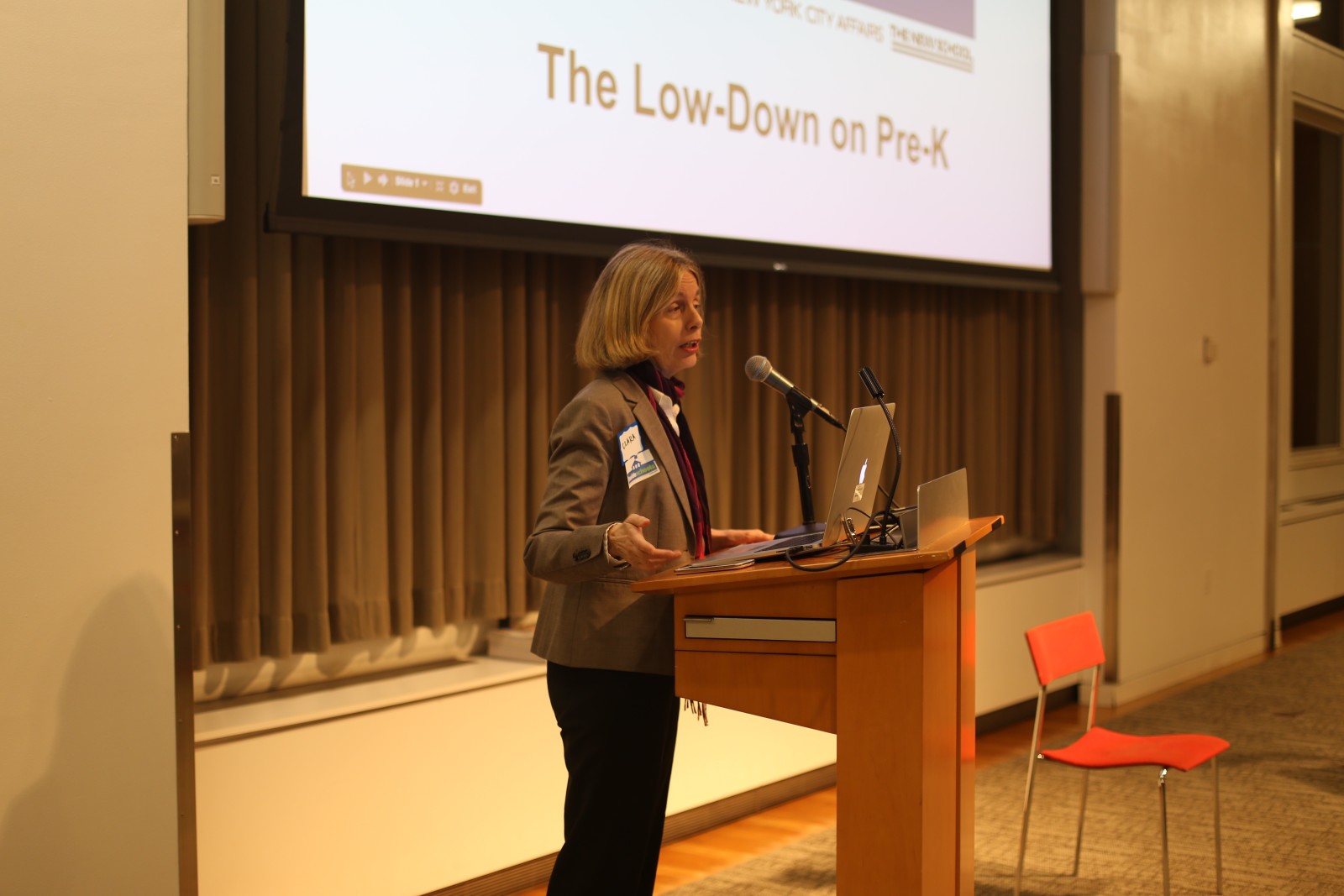 This is the second of a two-part interview with InsideSchools founder, Clara Hemphill by Urban Matters, a publication from our colleagues at The Center for New York City Affairs at The New School.

Urban Matters: Last week, we talked about the school-by-school reporting you oversee at InsideSchools. You also direct education policy at the Center for New York City Affairs at The New School. Did that role grow naturally out of what you do with InsideSchools?

Clara Hemphill: Our school profiles for InsideSchools are little pieces of a mosaic. The policy work tries to put those pieces together in a big picture. For example, when reporting for InsideSchools, we noticed that many high schools we were visiting didn’t offer chemistry, physics, and algebra 2—that is, they didn’t give kids the opportunity to take college prep curriculum. Nicole Mader, our policy analyst, did some number crunching to see how widespread the problem was. She discovered that 39 percent of high schools didn’t offer a college prep curriculum. That was the basis of our policy report “What’s Wrong with Math and Science in NYC High Schools.”

UM: In the 20-plus years you’ve been writing about City schools, there have been major changes in how they’re run. What’s had the biggest impact?

UM: Has that made the schools better – and where is there still room for improvement?

Hemphill: Yes, the schools are better and mayoral control is part of the reason. Teacher salaries are higher, teacher turnover is lower. Most of the schools have adequate books and supplies. There are many more schools where I would happily send my children than there were 20 years ago.

When I started, the conventional wisdom was that public schools were beyond repair. It’s hard to remember how bad some of the schools were. For example, two students were shot dead at Thomas Jefferson High School in Brooklyn on the same day in 1992 that Mayor David Dinkins was visiting. Even the schools that are struggling are mostly pretty safe today. And many more kids are finishing school. High school graduation rates have increased from 54 percent in 2004 to 80 percent in 2018.

UM: Wasn’t school choice supposed to address that? The pro-choice mantra was, kids’ zip codes shouldn’t limit their educational options – implicitly a civil rights argument. How has that played out?

That said, the explosion of school choice has certainly given lots of kids better options. And not all parents have to travel far for a better school. Most of the charter schools are in neighborhoods like Harlem and Central Brooklyn where the ordinary zoned schools are low-performing.

UM: But while school choice improves the odds for a lot of kids, is it fair to say it hasn’t had much effect on overall economic and racial segregation in the schools?

Hemphill: That’s right. What we’ve found is that parents who exercise school choice tend to enroll their children in higher-performing schools with fewer low-income classmates than in their zoned neighborhood schools. That means the schools they leave behind have higher concentrations of poverty and lower enrollments than they would have otherwise.

But unlike ordinary zoned neighborhood schools, neither charters nor gifted programs are required to admit children mid-year. Especially in poor neighborhoods, there’s a constant churn of kids coming and going during the school year and that makes it hard for schools get traction. The kids taking the standardized tests in spring are not the same as the kids who were in the school in the fall. There’s more stability in schools of choice.

UM: How about standardized tests? How has their importance changed over time?

UM: How about school discipline practices? Ten years ago, the emphasis was zero-tolerance; today, it’s restorative justice. Have things really changed, and how?

Hemphill: The number of students suspended has declined dramatically in the city. There’s a lot of evidence that students who are suspended are more likely to drop out of school, so that’s good news. Whether restorative justice works depends on how well the teachers are trained. Sometimes it works well and sometimes not.

UM: You mentioned student homelessness earlier – and with good reason. Estimates are that one in 10 public school students is homeless at some point in the school year. What does that mean for schools on a day-to-day basis?

Hemphill: Having a very high proportion of homeless children strains a school’s resources and can affect all children in a school, including those who have stable housing. Homeless children often miss school, and their teachers must cope with an ever-changing parade of pupils coming and going in their classrooms. Teachers must decide whether to slow down to review material for children who have been absent or to press on with lessons for the children who have good attendance. Homeless children are often the victims of trauma, having witnessed domestic violence, for example; they sometimes react with outbursts in class. Skilled teachers and counselors can help these children cope, but even the best staff can become overwhelmed if a class has too many children who are acting out.

UM: Last question: This summer you’re moving on from your roles running InsideSchools and education policy at the Center. But you’re not finished with writing about City schools. What’s next for you?

Hemphill: I’ve come to believe the biggest issue facing New York City schools is segregation. I’d like to write about how we ended up with such a segregated city and what we can do about it. I’m still trying to work out whether that writing will take the form of a book, or a series of op-eds, or pieces for radio.