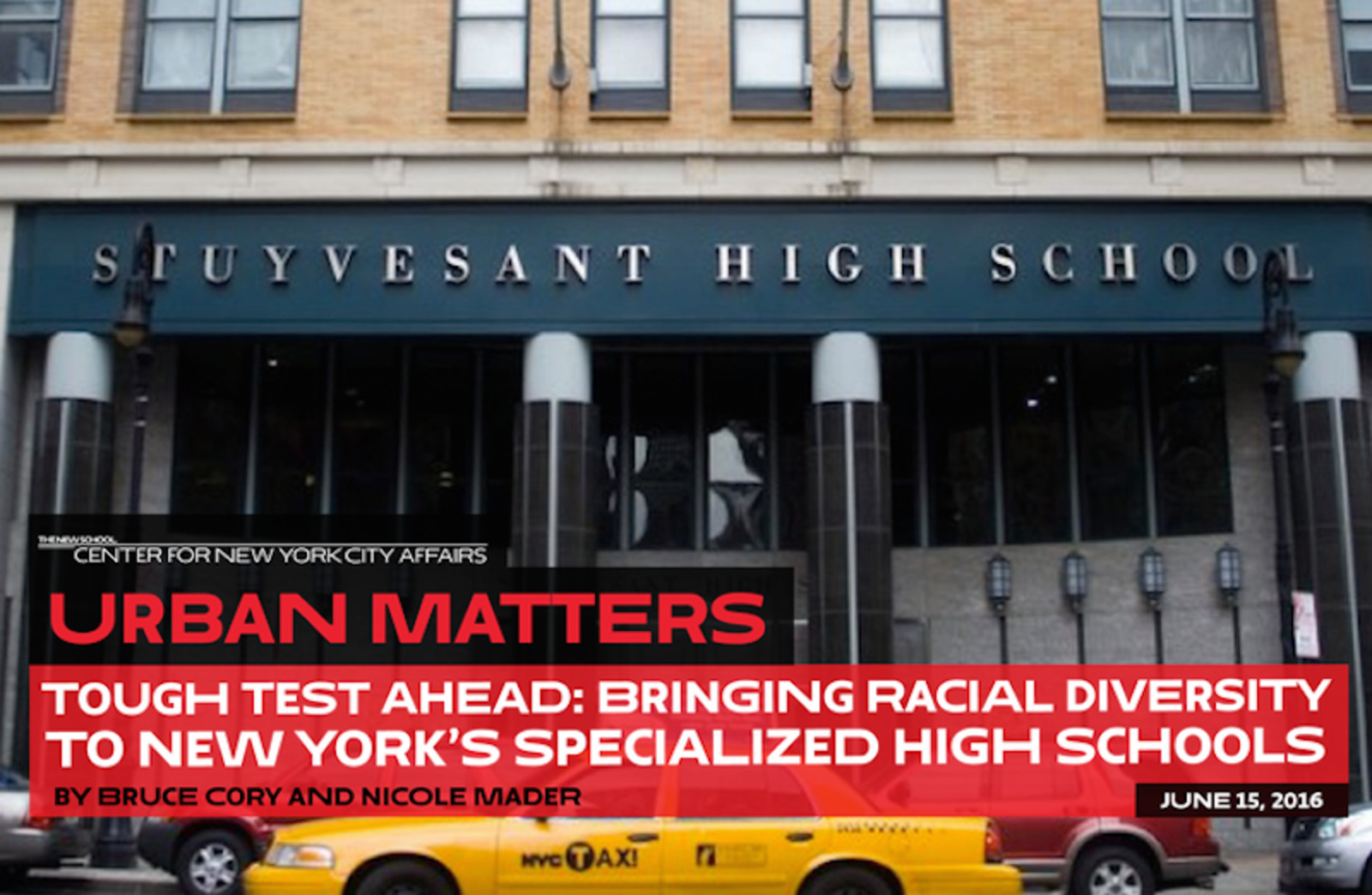 There’s a longstanding debate about why so few Black and Hispanic students are admitted to New York City’s specialized high schools, including Stuyvesant, Bronx Science and Brooklyn Tech. They accounted for fewer than 9 percent of students offered admissions at eight specialized schools for the current school year; that’s down from 9.6 percent the year before. Some say the specialized high school admissions test (SHSAT) is discriminatory and should be scrapped; others say the test merely reflects the poor preparation most Black and Hispanic students, who make up some 68 percent of public school enrollment, get in the elementary and middle schools.

Now, new research by the Center for New York City Affairs shows that even Black and Hispanic students who do very well in middle school—that is, those who as 7th-graders earn the best possible scores on either math or English language arts (ELA) state standardized tests—are much less likely to attend specialized high schools than their similarly high-performing Asian or White classmates.

This suggests that the City’s Department of Education (DOE) may be able to increase Black and Hispanic specialized high school admissions without scrapping the SHSAT (a politically daunting task) or completely overhauling the elementary and middle schools. It offers hope that plans announced last week to increase the diversity of students taking and passing the SHSAT could produce progress.

We found, for example, that almost 55 percent of Asian 7th-graders who scored Level 4 on either math or ELA tests in the 2012–13 school year are now wrapping up sophomore years at specialized high schools that use the SHSAT for admissions. However, only about 16 percent of such Black or Hispanic 7th-graders are now in one of these specialized schools.

That means that as 8th-graders, these approximately 1,710 bright Black and Hispanic students either: passed the SHSAT in October 2013 but then declined offers from specialized high schools; didn't score high enough for admission; or didn’t even take it.

Collectively, these 142 schools have significantly lower rates of graduation and college admission than do either the specialized schools or the non-specialized schools attended by most high-performing White students and many such Asian students. Students at these schools earn far fewer Advanced Regents diplomas and also score lower on other measures of college-readiness.

It takes nothing away from the skills and drive of high-performing Black and Hispanic students at such schools to say that with more outreach and preparation for the SHSAT at least some might now be doing more challenging high school work in a deeper pool of similarly sharp and ambitious students. And their prospects for success in college and careers would almost certainly be brighter.

To increase diversity at the specialized high schools the DOE should fish such waters. It seems ready to do so. Between now and the next SHSAT in October, it’s going to focus on giving high-performing Black and Hispanic middle-schoolers more attention through, for example, free tutoring and test-prep courses. Our data suggest this looks like a good strategy.

Now, some caveats: The Center for New York City Affairs recognizes that even if this admissions diversity improves, at best such progress will likely be measured in dozens, not hundreds, of students. We also strongly believe this is far from the only pressing educational challenge New Yorkers face. Our InsideSchools and education research projects have long worked to improve the full spectrum of elementary, middle and high schools. The InsideSchools staff regularly reminds high school–bound students and their parents that there are plenty of good options outside the specialized schools galaxy. Like others, we’ve also heard the criticisms that some of the specialized schools suffer from an unhealthy, hyper-competitive and grades-obsessed student culture.

But those aren’t reasons to maintain the status quo. We’ve all got a stake in reducing the troubling disparities at specialized high schools. They are, after all, very high-visibility reminders that in lowering class and racial barriers to quality education, we’ve still got a lot to do to bring up our grade.