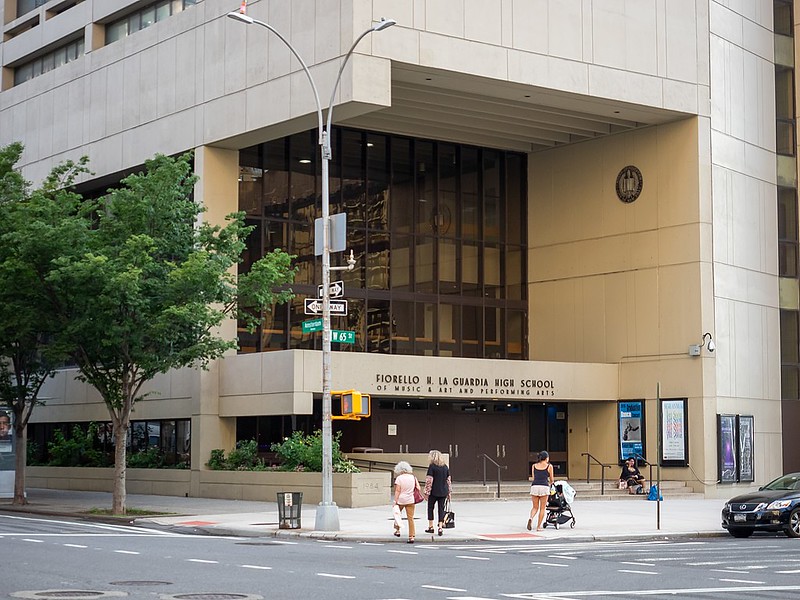 A haven for artists

The days are packed

Talented kids travel from distant corners of the city to study at the star-studded Fiorello H. LaGuardia High School of Music and Art and Performing Arts. One of the most sought-after schools in the city, LaGuardia educates children of movie stars along with children poor enough to qualify for free lunch.

Students take a regular academic course load as well as two to three hours a day of their chosen art specialty: drama, dance, vocal music, instrumental music, fine art, or technical theater (which includes lighting, costume and set design). There are tons of performances ranging from opera to musical theater and a wide range of sports teams. The days are packed: Classes typically run from 8 a.m. to 4 p.m. (and no going outside for lunch, moaned a parent, meaning little daylight in winter months). With up to three hours of homework a night and rehearsals after school and even during school vacations, sleep deprivation is a common complaint.

The overall quality of the teaching is strong, according to the Quality Review. Students are assigned to "honors" or regular classes depending on their level of achievement. The school offers a wide range of Advanced Placement courses. Parents say academics are strong but writing assignments in English and history classes, due in part to large class size, are often short journal entries and responses to readings, rather than frequent five or ten page papers.

The eight-story building opened in 1984 with the merger of two older schools, the High School of Music and Art and the High School of Performing Arts (made famous by the movie "Fame.") The size of the school can be overwhelming for some kids, particularly in their first semester as they are getting used to their routines. And, however conscientious the teachers may be, it's hard to get a lot of individual attention in a class of 34 students. Roughly two-thirds of the children reported that teachers don’t notice if they are having trouble learning something, or if they are upset.

Still, most kids are happy to be here. There is a spirited energy in being around students who are passionate about their work. “My daughter absolutely LOVES LaG,” wrote a parent, “and wouldn’t trade the intense, professional-level acting training she’s gotten for anything.” The 80-member choir sings beautiful gospel numbers in four-part-harmony, kids record music they wrote themselves and students make costumes and professional sets. Several disciplines work together to produce major musicals and shows open to the public. During intermission at a mature and moving production of August: Osage County, a father said, “It happens every time. You completely forget these are kids!”

The competition to get into these showcase performances is fierce and teens must audition for the more competitive music groups, said one mother, “which can be stressful.” But it is great for teens who “find the energy to cope,” she said, like a clarinetist who plays basketball and serves on the school leadership team.

Yeou-Jey Vasconcelos, former principal of Talent Unlimited High School was appointed as interim-acting principal in July 2019. Lisa Mars, LaGuardia's principal since 2013, stepped down after widespread complaints about her leadership including changes in admissions criteria to give more weight to test scores than talent. Some complained she is inaccessible; others claim the instrumental music and vocal programs were neglected.

The school has attracted some celebrity children in recent years, including the offspring of Madonna, Robert De Niro and Suzanna Vega. It has a mix of white, black, Latinx and Asian students as well as kids from all five boroughs, even the southernmost tip of Staten Island. Nearly 30 percent of students qualify for free lunch. The student body is more than 70 percent female and has many openly gay and lesbian students.

Most students go on either to 4-year liberal arts colleges or to conservatories including Julliard, Berkelee School of Music and Rhode Island School of Design. Recent graduates attend Ivy League colleges including Harvard, Yale and the University of Pennsylvania, or competitive schools such as Vassar College or Northwestern. Many students go on to CUNY and SUNY schools. Dancers sometimes postpone college and go straight into professional performance.

ADMISSIONS: Auditions are held from November through December and are highly competitive. In addition to talent, students must have good attendance, strong academics, with at least an 80 in each of their core academic courses and a Level 2 or higher on standardized ELA and math tests. Most admitted students score a 3 or 4 on state tests.

LaGuardia refused our repeated requests to visit. This report is based on interviews, a review of data, news reports and attendance at a school performance in 2018. (Clara Hemphill and Lydie Raschka, July 2018; updated with new principal information, October 2019)

The first two years comprise of training in traditional skills and disciplines, which include drawing, painting in water-based media, graphic design, and painting in oils and acrylics. After taking the core art courses, students take advanced courses in the subjects listed and with other elective offerings such as architecture, art history, ceramics, computer graphics, digital media, fashion illustration, mural painting, photography, print making, and sculpture. Applicants must bring a portfolio of 8-15 pieces of original artwork done in a variety of media. The artwork should be from observation, imagination, and memory, and labeled appropriately. Photographs - not originals - of three-dimensional (3D) works may be included. For the audition, applicants will be given three drawing assignments, including drawing the human figure from observation, drawing a still life from memory, and creating a drawing in color, based on imagination. All drawing materials for auditions will be supplied by the school at the audition.

Participants study sight singing, music theory, and music history. This studio's performing groups include four symphony orchestras, two concert bands, two jazz bands, and two musical pit orchestras. Participants also have the opportunity to compose, conduct, and perform original repertoire and utilize a state-of-the-art SoundLab recording studio. Applicants should prepare a solo selection to perform without accompaniment and bring one copy of the music they plan to perform. Applicants should bring their instruments to the audition, except those auditioning on piano, percussion, tuba, double bass, and harp. These instruments will be provided by the school at the audition. Amplifiers will also be provided at the audition for electric guitarists. Applicants will be tested for rhythm and tonal memory and will be asked to complete a sight-reading of a given selection.

Participants study sight singing, music theory, and music history. Students receive training in Italian, German, and French vocal literature. This studio's performing groups include Elementary, Mixed, Girls, Women's, and Senior Choruses; Gospel Choir; and Show Choir. In addition there is an annual full-scale opera production. Music electives include chamber music, guitar, music technology, piano, and songwriting. Applicants should prepare a song to sing without accompaniment for the audition. The musical selection can be classical or popular in style. In the audition, applicants will be asked to sing back melodic patterns and tap back rhythmic patterns. LaGuardia High School has a suggested online song list (www.laguardiahs.org). Applicants are not required to select from the song list.

The Drama program focuses on acting preparation through block-programmed courses in acting (Meisner and Stanislavsky method), voice and diction, physical techniques, theater history, musical theater, acting on film, career management, and script analysis. Students have numerous opportunities to perform in professional theater spaces throughout their four years, culminating in our Senior Drama Festival. Applicants should be prepared to perform two contrasting one-minute monologues. Applicants will be asked to do an impromptu reading and participate in an interview. Attire should allow free movement since applicants may be asked to demonstrate how well they move physically.

In block programs, students receive practical training in scenic carpentry, electrics, lighting technology, costume construction, sound properties, stage management, technical drawing (AutoCAD and Autodesk 3DS Max), welding, career management, and design. Students participate in both the production and performance aspects for the various school events. Students may earn transferable college credit through SUNY Potsdam. Applicants are expected to bring a prepared 3D design model/diorama for presentation, along with a photograph of the diorama. Applicants will be asked to participate in a small-group, hands-on practical in one or more aspects of technical theater.

This school is in its own building.

Uniforms required? No
Metal detectors? No

High School of Arts and Technology