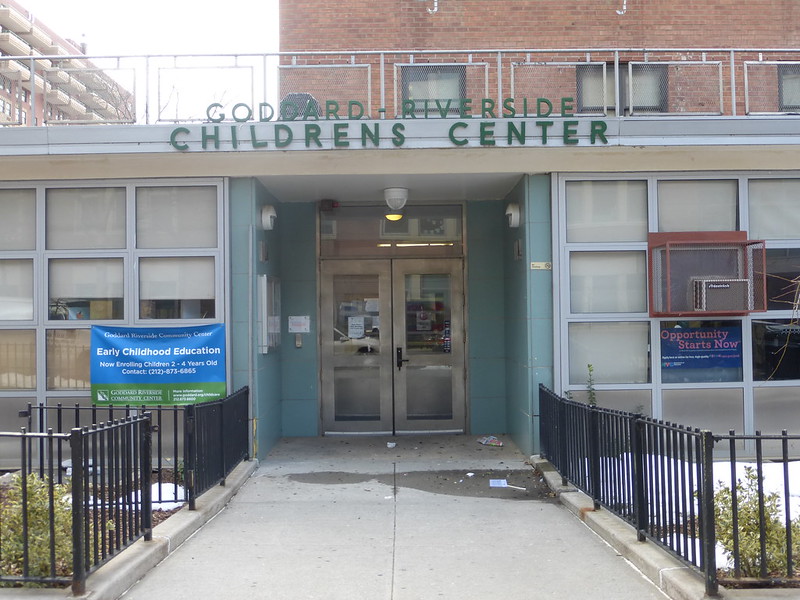 The many perks at Goddard Riverside Day Care 1 on West 91st Street include a playground right outside the door, an on-site cook, and three spacious and inviting classrooms stocked with blocks, puzzles and small objects for learning how to count, plus a cozy library donated by chef Mario Batali. Children enjoy trips to the American Museum of Natural History and, on one visit, got so excited about sea animals they made an enormous blue whale out of paper that covers half of a classroom wall.

Goddard Day Care is on the ground floor of Wise Towers housing development. Two classrooms give priority to children whose parents can document that they have low incomes and need day care until 5:45 pm. One is UPK-only (universal pre-kindergarten). This class is open to all, and attracts families who have enough money to employ nannies and who are able pick up children at 3:15 pm, said director Viodelka Moreira, who previously worked at Lutheran Social Services in the Bronx.

Bureaucratic barriers mean children in pre-kindergarten programs are sometimes separated according to how much money their parents earn. It is a downside here because decades of research shows that poor children do better academically in economically mixed classes. In 2015 the Department of Education offered pre-k program directors the possibility of mixing children from different programs in one classroom if they filled out a waiver, but Moreira said she was unaware of this option.

All three classrooms at Goddard follow the same routines and explore the same topics. Parents who work for the MTA or in healthcare on the Upper West Side sometimes travel from Brooklyn or the Bronx because they find Goddard's pre-k superior to the options in their own neighborhoods, Moreira said.

ADMISSIONS: The UPK-only classroom tends to fill up first, said Moreira. Drop-in visitors are welcome between 10 am and 3 pm on Mondays and Thursdays. (Lydie Raschka, February 2017)