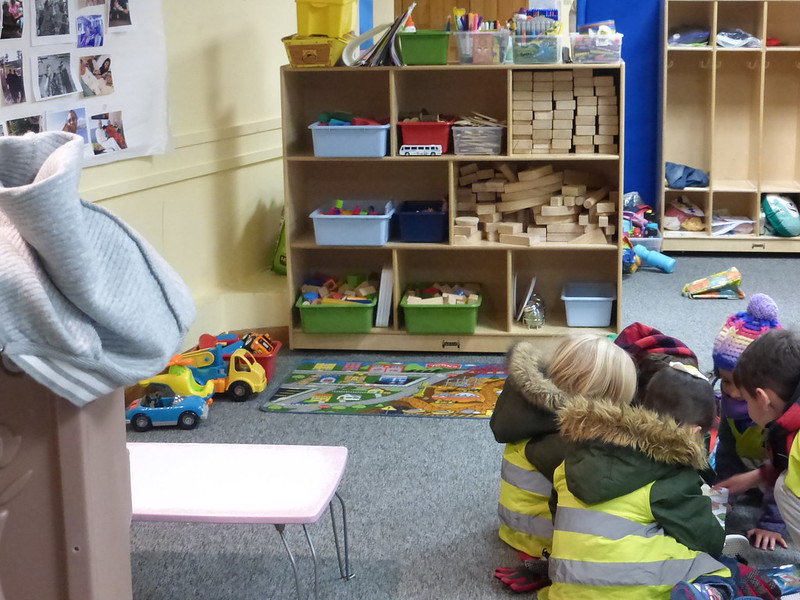 Play Together NYC is a tiny, close-knit pre-kindergarten on the Upper West Side that rents space in the basement of the Ohav Sholom synagogue. On our visit, a group of expressive and relaxed 4-year-olds were putting away toy trucks, cars and blocks in preparation for a walk to Riverside Park. "We have a happy group of kids," said director of admissions Lena Jakobsson, one of several kind and attentive adults we saw interacting with the kids.

The programs 3- and 4-year-old's share the same long, low-ceilinged room but are separated by a bright blue partition. The room is filled with art supplies, books, blocks and dress-up clothes hanging on low hooks along one wall by a toy kitchen. Each child has an alphabet book to practice letter recognition, sounds and writing. "As the year goes on you can see them get more excited about writing," Jakobsson said. Lunch is provided by Amsterdam Deli and includes items such as chicken patties, ravioli and turkey sandwiches.

Founder and director Nyla Kamlet has a master's degree in social work and has worked as a child therapist. In testimonials on the Play Together website, parents say she is particularly attuned to children's social and emotional needs. "She intentionally avoids the trendy force-feeding of academic concepts," wrote one. "Children learn through play, and their expression improves through various artistic means."

There is no after-school program and outside scaffolding blocks most of the natural light, but children go outside every day, Jakobsson said. Indeed, on a windy, 38 degree day, three staff members made sure every child wore a winter hat, mittens and a fully zipped-up coat, plus an orange safety vest, and took them out. The pre-k has its own entrance down a short winding stairwell and is not affiliated with the synagogue.

ADMISSIONS: Most of the 16 seats fill up with the program's rising 3 year olds; about five additional spaces opened up in 2016. The staff called people on the roughly 100-name wait list as late as August and even into September to fill all seats, the director said. (Lydie Raschka, February 2017)

All My Children Daycare UWS