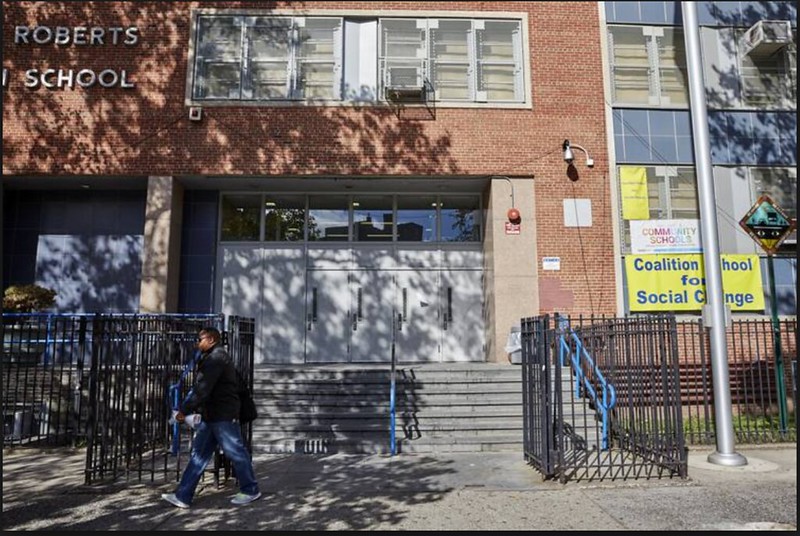 MARCH 2018 UPDATE: The the Panel for Educational Policy voted to close the Coalition School for Social Change at the end of June 2018 because of poor performance.

The vision: A nurturing school that welcomes kids who may have struggled in middle school.

The reality: Most days begin with electives such as theater games, art, electronic music, Mouse Squad (computer repair), swimming or architecture. After the earthquake in Haiti, kids designed module homes and hospitals in potato containers and placed them on a map of Port-au-Prince in the architecture class.

Parents, students and teachers say they feel safe and respected, according to the Learning Environment Survey. Seniors fulfill 80 hours of community service by participating in food and coat drives and serving in day cares, libraries and senior citizen centers. Our motto is to leave the world a better place than we found it, said Assistant Principal Bill Costello.

The school serves a needy population and has long suffered from poor attendance and low graduation rates. However, John Sullivan, who became principal in September 2011, is adding rigor to the academic program, Costello told us at the high school fair. He seems to run a good ship. AP English is offered and strong students may take classes at Hunter or John Jay College.

Coalition is a part of East Harlem Pride, a group of small schools (including Central Park East and The Heritage School) that has banded together so they can offer their students more sports: basketball, bowling, flag football, track, baseball, wrestling, volleyball, softball and golf.

The school moved from West 58th Street in 2009 and now shares the IS 45 Alternative Education Complex on First Avenue with MS 45 S.T.A.R.S. Prep Academy and the Leadership Village Academy Charter School. The building is seven blocks from the nearest subway stop (at least until the 2nd Avenue subway is completed.)

College admissions: Students have been accepted to CUNY and SUNY schools and Brigham Young.