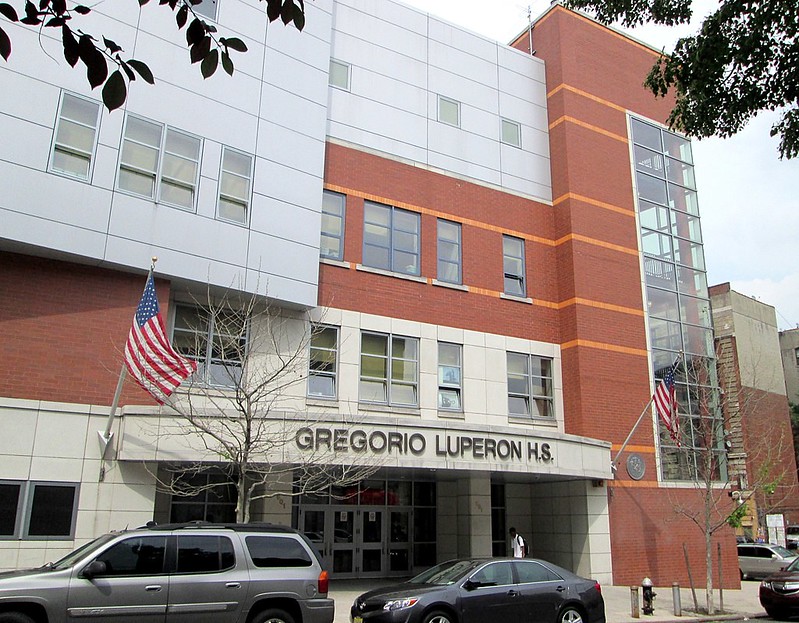 Many students with low skills need to catch up

Founded in 1994 to serve Spanish-speaking students who are new to this country, Gregorio Luperon is a safe and welcoming school where students feel inspired to learn, according to school surveys. A new program in robotics and aviation, launched in 2018, expands the school’s offerings in science, technology, engineering and math (STEM).

Students may learn the fundamentals of flight by constructing hot air balloons made of tissue paper, “rockets” made of rubber balloons, and model airplanes made from balsa wood; 24 students, 12 male and 12 female, may take part in the You Can Fly program designed to encourage students to consider a career as a pilot. “Our goal is more females in engineering and math,” said robotics teacher Jonas De Leon, who is also a pilot.

The contemporary school building, which opened in 2008, is flooded with light and cheery colors. It boasts science labs, a large gym and a library filled good-sized worktables, computers and windows overlooking trees and a church with a round stained-glass window.

Plans for the new STEM program include a Federal Aviation Administration-approved aviation training simulator, as well as Advanced Placement courses in physics, biology, computer science, calculus and advanced robotics, according to the Washington Heights Patch.

Many students arrive with weak academic skills, and the school’s 4-year graduation rate is below average. However, about 80 percent of students graduate within 6 years.

“Students are treated with a great sense of respect,” according to the school’s Comprehensive Education Plan. “Students’ attendance is always high, and many students and staff members remark that the school feels more like a family than a school.”

ADMISSIONS: The school serves newly-arrived immigrants, ages 14-18, who have completed at least eight years of education in their native countries and who have been in the United States for fewer than two years. (Clara Hemphill, DOE statistics and news reports, August 2018)

How many teachers have 3 or more years of experience teaching?
87%
76% Citywide Average
Years of principal experience at this school
3.7

How many students miss 18 or more days of school?
21%
38% Citywide Average

How many English language learners graduate in 4 years?
87%
68% Citywide Average

Students take a four year sequence in Science, Mathematics, and Social Studies in a bilingual setting; extensive sequence of English as a New Language and English Language Arts; Spanish AP Language and their choice of other AP courses and/or electives; and modified programs to serve the needs of Newcomers transitioning to New York City. All four years encompass objectives of college and career preparedness and readiness.

Dual Language programs are designed to integrate English Language Learners with English-proficient students to receive content instruction in English and a target language. This program is open to all students regardless of interest area.

High School of Arts and Technology