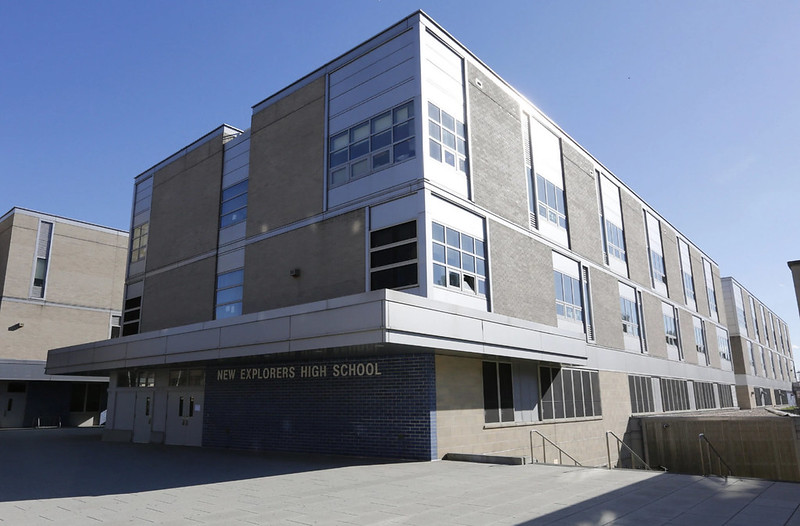 Dance, music and art studios; a Latin band and a jazz band

School closed for poor performance in 2018

MARCH 2018 REVIEW: The Panel for Education Policy voted to close New Explorers High School at the end of June 2018 because of poor performance.

OCTOBER 2010 REVIEW: New Explorers High School strives to engage struggling and alienated students with dance, music, drama and the visual arts. The school has gone through turmoil with the death of their former principal in 2009, resulting in the loss of over half the teaching staff and many students. They have also had an influx of special needs students and moved to a larger building. "It's been a difficult transition" said principal Jacob Hobson.

Hobson's intent is to bring in more structure and academic rigor gradually, while allowing the community to heal. The message to students, with regard to rules, was mixed. Uniforms and newly assigned lockers are incentives to tighten up on the "anything goes" atmosphere that Hobson said was the norm and still exists to a great extent. Cell phones and iPods are allowed only during lunch, he pointed out, yet students in other parts of the building could be seen stashing them as teachers approached, then bringing them out again as teachers passed. During our visit, Hobson shooed kids out of hallways and checked bathrooms between classes. The atmosphere was relaxed overall as teens played cards and dominoes in the cafeteria during lunch and jammed on drums and guitars in the music room.

The school is taking advantage of new dance, music and visual arts studios, as well as a shared auditorium for drama. A Latin band and a jazz band are engaging programs for students. Enthusiasm for the arts is high among some staff - and stated as a priority by administration. However, other teachers want to put more emphasis on academics so they can bring lagging students up to speed. To boost basic academics, extra math help is offered and ninth graders are required to take a double block of English Language Arts.

We saw some excellent teaching. In one class, students read aloud from Arthur Miller's play, A View from the Bridge, and a young teacher led a stimulating and meaty discussion focused on womens roles and self-respect. She defined difficult words and called names at random to elicit opinions. We also saw teachers struggle to get noisy students to settle down so they could begin class and keep students behind to discuss behavior after class.

In September 2010, New Explorers moved into the Mott Haven Educational Campus, a lovely new facility with lab facilities, art studios, and a beautiful library filled with brand new books. However, the building has had problems, including flooding in one gym and broken security cameras. The nine-acre complex also houses Urban Assembly for Careers in Sports, Bronx Leadership Academy II High School, KIPP NYC College Prep Program, and a District 75 program. In all, the facility will be home to over 2,300 students.

Students who major in dance study and perform a variety of dance styles from classical ballet to modern dance.

Students who major in music have an opportunity learn how to play band instruments and/or participate in treble choir. Students gain an appreciation for music and how music impacts culture.

Students who major in visual art learn how to work within a variety of mediums and styles. Students gain an appreciation for visual art and understand its cultural significance.

Students majoring in drama study acting techniques and have the opportunity to perform in schoolwide performances.