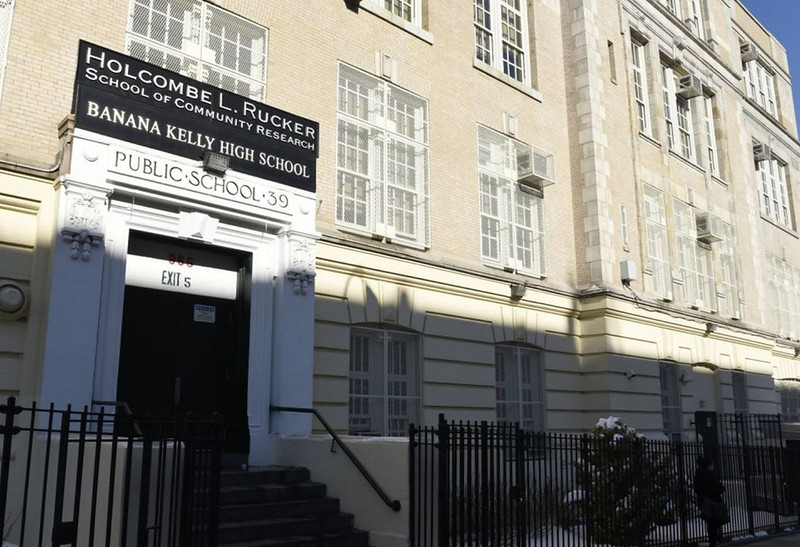 The Panel on Education Policy voted in April 2018 to merge Holcombe Rucker with Longwood Preparastory Academy, a more successful school in the same building.

OCTOBER 2010 REVIEW: Math teacher Ryan Glass's classroom at Holcombe L. Rucker School of Community Research looks like something for much younger children: sofas in the corner, pillows near the teachers desk, posters on the walls. Here, class might start with students sitting on the carpeted floor doing breathing exercises to relieve stress. "A lot of kids come with math anxiety," Glass explained.

Definitely not your fathers math class. But it's a showpiece at Holcombe L. Rucker, a welcoming new high school in the Bronx where one-fourth the student population lives in shelters and many students need extra academic help. "We're serving kids that are coming from a lot of very tough places," Glass said. In response, educators crafted a nurturing environment where students can work toward a diploma while also acquiring confidence and social skills.

OCTOBER 2010 REVIEW:  ROG"We believe that we have to first set kids on the right track socially," said Principal Sharif Rucker, the school's founder and grandson of its namesake, a Harlem activist."Then we engage them academically. And then we let them go." Rucker taught social studies for 11 years at Boys and Girls High School in Brooklyn and worked for a year as assistant principal at Canarsie High.

Opened in 2006, Rucker shares a former elementary school building with Banana Kelly High School. The two schools share most extracurricular activities and varsity sports. The school has a small fitness room, but its main gym is in a separate building a block away.

Karen, 17, transferred to Rucker for her senior year after hearing glowing reports from her younger sister. By mid-October, Karen had already joined the cheerleading squad, become an editor on the school paper and was running for class president. She said she liked the school's supportive peer tutoring programs and felt safe in the building. "They don't really have fights here. There's no violence," she said.

Most math and English classes are kept to half-size, about 15 students. Other courses typically have 27 students. When we visited in October 2010, the school had just begun advanced English and Spanish classes and planned to add art and psychology.

Beginner English courses are available for students who speak a foreign language. Popular monthly "Town Hall" meetings run by the students address topics ranging from state politics to neighborhood problems. Many teachers are young and short on experience, yet most seem dedicated.

Shawn Blanchard, who has taught math and financial literacy at the school since 2006, said the family-oriented school is like a second home for his students, who often ask for help with significant personal problems as well as academics. Ive had students who have come to me about contemplating suicide, he said. Attendance is a constant struggle, and not all students are successful. But we do win a lot, said Blanchard. "We get students at very low levels, and we raise that bar."