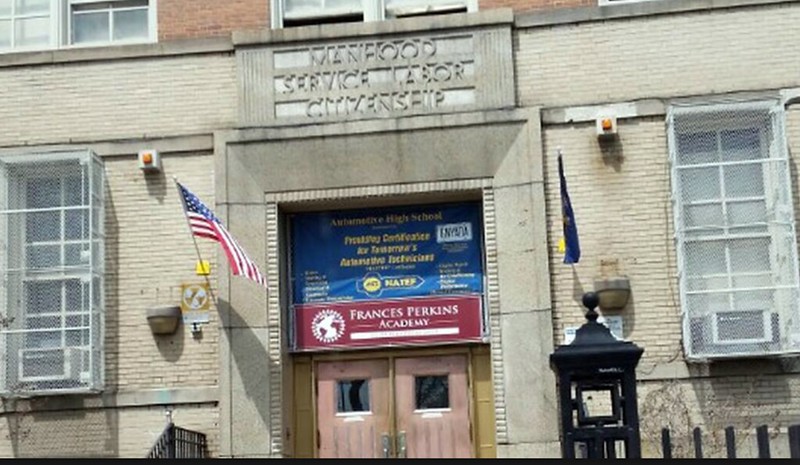 Students say discipline is unfair; teachers don’t trust one another

Automotive High School has had its shares of struggles over the years, but one thing has stayed solid: students can get certified to be mechanics through a hands-on auto repair program. They may also learn computer programming or digital design.

Automotive has seen modest improvements in the past decade despite a revolving door of principals, high teacher turnover, and a student enrollment that declined from nearly 1,000 in 2010 to barely 300 in 2019. Attendance, while still poor, is on the upswing, and the graduation rate, once very low, is now close to the citywide average.

The school still has a ways to go toward improving its tone and culture. Although safety has improved in recent years, more than one-third of students say discipline is unfair and fewer than half of the teachers say they trust one another, according to school surveys.

Some 90 percent of the students are male. Most enter with weak academic skills. About 15 percent are over-aged and one-third have disabilities.

Admissions: The school typically has room for anyone who wishes to attend. (Clara Hemphill, DOE statistics, December 2018)

How many teachers have 3 or more years of experience teaching?
81%
76% Citywide Average
Years of principal experience at this school
1.0

This rigorous 4-year sequence requires students to complete 1000 hours of work in engine performance, electronics, brakes, and transmissions for career opportunities in the automobile repair, tuning, diagnosis, and other areas. Students engage in industry-based assessments, competitions, and Work Based Learning opportunities with our business partners. Completion of the program results in CTE Certification and ASE/NATEF entry-level certification allowing the opportunity to work upon graduation.

This Academy prepares students for cutting-edge careers in experiential design and digital media. We teach an integrated approach based on four fundamentals: design thinking, visual communication, technology, and user experience. Students in the academy are strategic thinkers, producers, and technologists poised to lead innovation on a global level.

This Academy prepares students for opportunities in programming, web design, robotics, and other areas in the expanding digital workplace. This rigorous curriculum includes computer-aided design using Project Lead The Way (PLTW) curriculum and hands-on application culminating in prototype development. Students complete a minimum of four math courses and a three-year engineering sequence. Extracurricular opportunities include Robotics and SkillsUSA where they can continue to develop their skills.