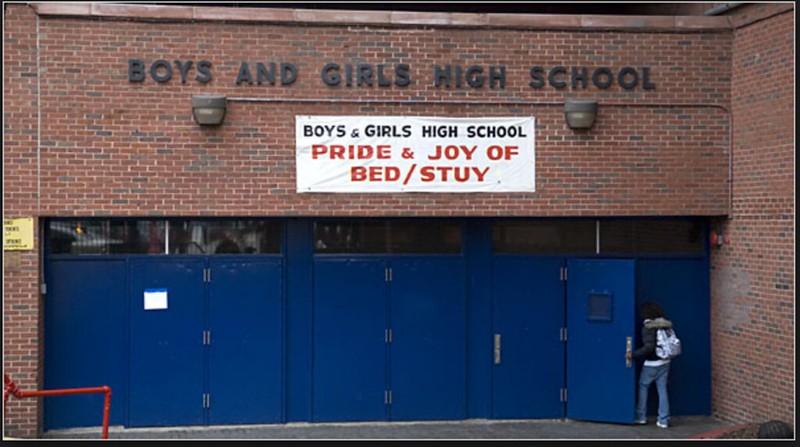 Optimistic principal dedicated to turning around the school’s reputation

Boys and Girls High School is working to improve its reputation as it emerges from a period of poor performance. Principal Grecian Harrison, an effective manager who is popular among teachers, is working to improve the school but faces enormous challenges with attendance and graduation rates.

Harrison, who became principal in 2016, spoke to NY1 about her goals for the school, “Rebrand, rebuild and recruit. We feel that it’s very important to change the community’s perception of Boys and Girls High School.” One of her first decisions as principal was to build a museum within the school tracing Boys and Girls’ history back to the creation of Central Grammar, Brooklyn’s first public high school, in 1886. Central Grammar split into two schools, Boys High School and Girls High School, that ultimately merged in 1975 to create what is now Boys and Girls High School. The museum also highlights esteemed graduates, such as America’s first black congresswoman, Shirley Chisholm, and the famous NBA players Dwayne “Pearl” Washington and Lenny Wilkens.

Once nicknamed the Pride and Joy of Bed-Stuy, Boys and Girls was led for years by a charismatic disciplinarian, Frank Mickens, who patrolled outside school carrying a claw hammer until his retirement in 2004. Mickens's supporters said he brought order to what had been a troubled, chaotic place by enforcing strict codes of conduct and keeping out kids he called troublemakers. But critics said he illegally pushed out low-achieving students. In 2008, after a lawsuit by Advocates for Children, the city agreed to give students who had been excluded from school a second chance to graduate, according to the the New York Times City Room blog.

The school, which used to house more than 3,600 students in the early 2000s, now enrolls about 400 and shares a building with two other small schools: the Nelson Mandela School for Social Justice and Research and Service High School. The spacious building is decorated with colorful murals, including artwork by Ernest Crichlow, an influential Harlem Renaissance painter. The three schools share some resources, including a College and Career Readiness Center.

Although small, the school has a range of classes, including Advanced Placement classes such as AP Calculus and AP English Literature, as well as career and technical education (CTE) classes in engineering, architectural drafting, computer technology and theater arts.

Boys and Girls is a basketball powerhouse that prepares students to compete at the college level. Many other PSAL sports are also offered, including football. While arts and music are limited, there are theater classes students can take. Students may participate in acting workshops with the Manhattan Theater Club, and two students were featured in Spike Lee’s She’s Gotta Have It series on Netflix.

Although the school has made great strides in safety, it still has a ways to go. College-readiness levels are lower than the citywide average; few students go on to college and attendance is poor. In addition, the school's quality report found that classes lacked engaging and challenging material, despite improvements from previous years.

SPECIAL EDUCATION: The school has a large population of students with disabilities, but graduation rates for these students are lower than the citywide average.

ADMISSIONS: Zoned school. There are screened programs for several programs within the school that have GPA and standardized test score requirements, but seats are rarely filled. (Isabel Corpus, web reports, June 2018)

How many students were suspended?
6%
2% Citywide Average

How many teachers have 3 or more years of experience teaching?
77%
76% Citywide Average
Years of principal experience at this school
3.0

How many students with disabilities graduate in 4 years?
65%
66% Citywide Average

This program is comprised of a rigorous curriculum which gives scholars an opportunity to earn a New York State high school diploma and 30 transferable college credits and/or enrichment high school credits from Long Island University and the College Now program at the New York City College of Technology.

This program provides students with rigorous academic course-work and a sequence of applied skills in the following career pathways: Electrical Installation, Architecture, Computer Programming, and Theater Arts. Students will have the opportunity to earn an Advanced Regents diploma, pursue industry-recognized credentials and additional industry training, and receive support to enter the workforce.

Zoned students have access to all Boys and Girls High School programs including Advanced Placement and other college level courses and specialized electives.