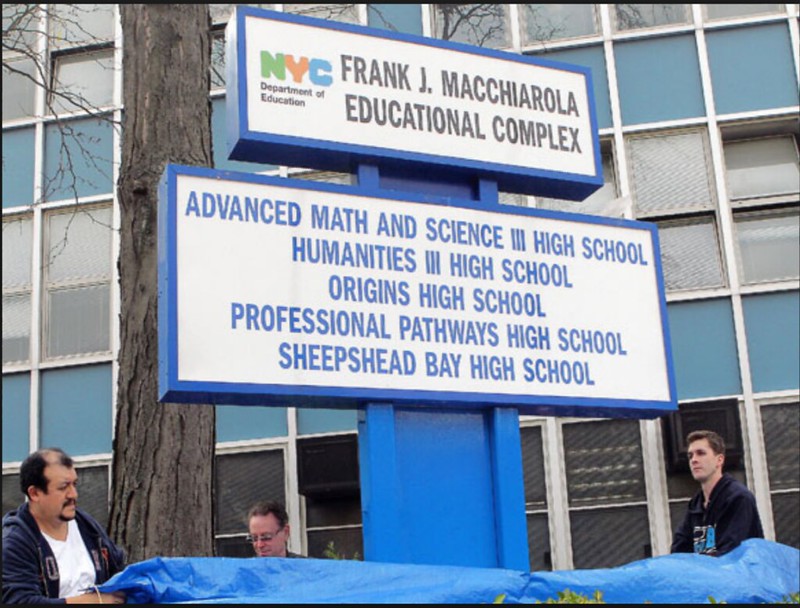 Multi-racial school where students present portfolios of their work

A small school with a focus on writing, research and learning to speak to an audience, Origins High School serves a multi-racial student body, including many new immigrants. Students speak 24 languages at home and may study Russian, Mandarin or Italian at school.

Opened in 2013 in the former Sheepshead Bay High School (renamed the Frank Macchiarola Educational Complex), Origins High School has quickly established a climate of trust and respect among the faculty, according to school surveys. Teachers give the founding principal, John Banks, high marks and say they would recommend the school to prospective parents.

Banks, who taught middle school English at the Academy of Arts & Letters in Fort Greene, has replicated some of that popular school’s teaching techniques. For example, students present their academic work, called “portfolios,” twice a year at roundtables attended by teachers and community members.

The school had a high suspension rate in its first years, and teachers were working on establishing “restorative practices,” that is, a system of resolving disputes and reducing behavior problems with alternatives to suspension, according to the school’s Comprehensive Educational Plan.

Admission: The school gives priority to students who live nearby, but in recent years it has had room for everyone who wants to apply. (Clara Hemphill, web reports, December 2018)

How many teachers have 3 or more years of experience teaching?
63%
76% Citywide Average
Years of principal experience at this school
6.1

Our school uses a liberal arts curriculum emphasizing the arts that allows students to experience a wide variety of courses over their four years of high school. We offer multiple electives, including three languages, 20+ arts courses in both visual and performing arts, and additional extracurricular opportunities to allow students to explore their budding interests. Five AP courses and multiple College Now opportunities support our juniors and seniors in their college preparation process.