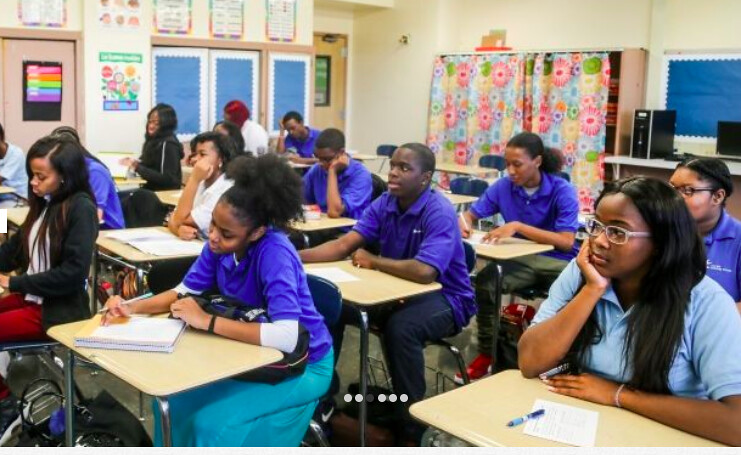 Extra instruction in math and reading

Founded by the United Federation of Teachers in 2009, UFT Charter High School is a tiny school that serves many students who have fallen behind in middle school. To help them catch up, the school provides extra instructional time in reading and math.

The UFT Charter School was designed to show that the union is not to blame for the city schools' problems. While many proponents of charter schools have suggested that excessive union regulations prevent ordinary public schools from being successful, the UFT Charter School set out to prove that it's possible to run a good school while following the union contract.

The charter began as an elementary school in 2005 and expanded into a middle and high school. However, the school was beset by problems; teachers and principals came and went. Suspension rates were high. The city closed grades K – 8 due to poor performance in 2015.

The high school hangs on. It too was plagued with high teacher and principal turnover in its first years—but both have stabilized in recent years.

Enrollment dropped when the middle school (the primary feeder school) closed, however. “We never had to focus on marketing before,” said Assistant Principal Monique Davy. “But we do have a recruitment team now.” The team has reached out Van Siclen Community Middle School in the same building, and to Brooklyn Scholars, a K-8 charter.

Davy has brought in Restorative Justice practices to create a positive climate and reduce suspensions. Peer mediators are trained to diffuse situations with an adult present and help come up with consequences for breaking rules. For example, after a mini food fight in the cafeteria, the teens involved had to clean up the cafeteria for a week, Davy said.

“I really don’t believe in suspensions,” Davy said. “It’s proven it doesn’t work. Half the time those students are already struggling and you’re making a bad problem worse.”

Roughly half the students earn college credits through a partnership with Kingsborough Community College, Davy said. Students take college trips each year and all graduates have been accepted into two- or four-year colleges. The school has a girls’ empowerment group and a good selection of sports teams.