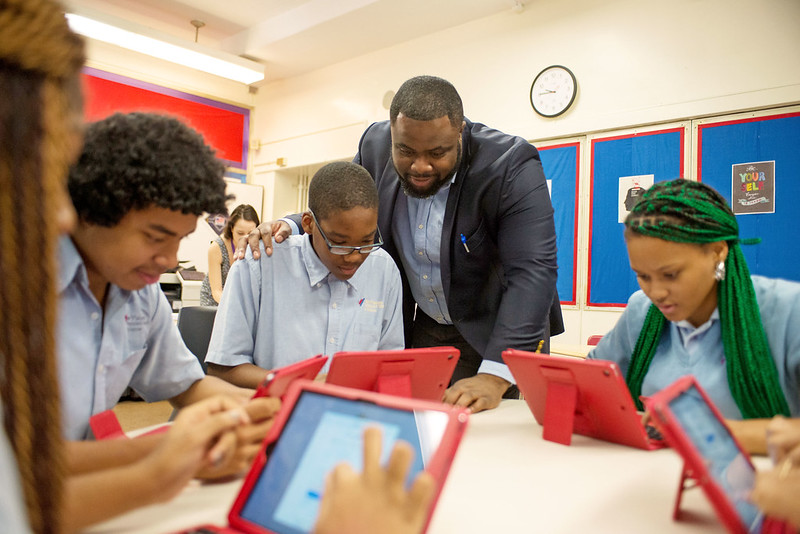 Longer school day and four years of math and science

Some students say students don’t respect each other

Advanced Math & Science III is part of the New Visions Charter High Schools network, which were created by New Visions for Public Schools, a nonprofit organization that has worked to strengthen NYC public schools since 1989.

Founded in 2013, the school shares the Frank J. Macchiarola Educational Complex building with three schools, including its sister school, New Visions Charter High School for Humanities III. They are modeled after the flagship New Visions schools that opened in September 2011 in the John F. Kennedy building in the Bronx.

Students attend school from about 8:15 am to 3:00 pm every day. There is a required summer session for new 9th and 10th graders. After school activities are available daily, offering clubs determined by student interest. Students are encouraged to try out for campus-wide sports teams such as bowling, gymnastics, baseball, softball, basketball, football and more.

A downside: While students feel teachers maintain order, and most feel safe in school, fewer than half said students treat one other with respect, according to school surveys. Advisors meet with their students daily.

ADMISSIONS: All students are admitted by lottery. Students must fill out an application typically by April 1. Applications recieved after the deadline will be placed on a waitlist. Admissions is ongoing until all seats are filled. Visit www.newvisions.org/admissions for more information or email [email protected]  (Lydie Raschka, email correspondence and web reports, April 2020)

How many students were suspended?
4%
2% Citywide Average

Years of principal experience at this school
7.0

How many students miss 18 or more days of school?
25%
38% Citywide Average

How many students with disabilities graduate in 4 years?
63%
66% Citywide Average