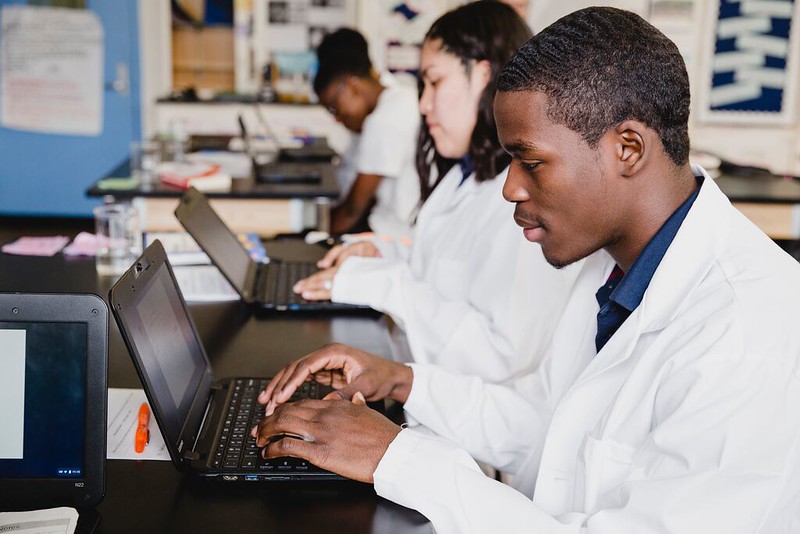 Some teachers say order and discipline is not well maintained

Humanities III (HUM III) is part of the New Visions Charter High Schools network, created by New Visions for Public Schools, a nonprofit organization that has worked to strengthen NYC public schools since 1989.

Humanities III is modeled after the first New Visions Charter School for the Humanities that opened in September 2011 in the John F. Kennedy building in the Bronx, offering a challenging curriculum to prepare students for careers in education, the arts, public service and media.

Students wear uniforms and attend school from 8:30 am-3:20 pm every day. The school offers three trimesters (instead of two semesters) so students can take more classes and accumulate more credits. Advisors meet with their students daily. Most classes have 25 students. [photo provided by New Visions]

Students are encouraged to try out for one of over 15 PSAL teams on the Frank J Macchiarola campus. Students may participate in after school clubs such as art and music therapy, boxing, student government and more. While most students say they feel safe in school, on school surveys, only a small percentage of teachers say order and discipline are maintained.

ADMISSIONS: Lottery, District 22 preference. Applications must be completed typically by April 1. Applications received after the deadline will automatically be placed on a waitlist. Admissions is ongoing until all seats are filled. Visit www.newvisions.org/admissions for more information or email [email protected] (Clara Hemphill, web reports, March 2017; data and email correspondence, January 2020)

How many students with disabilities graduate in 4 years?
86%
66% Citywide Average