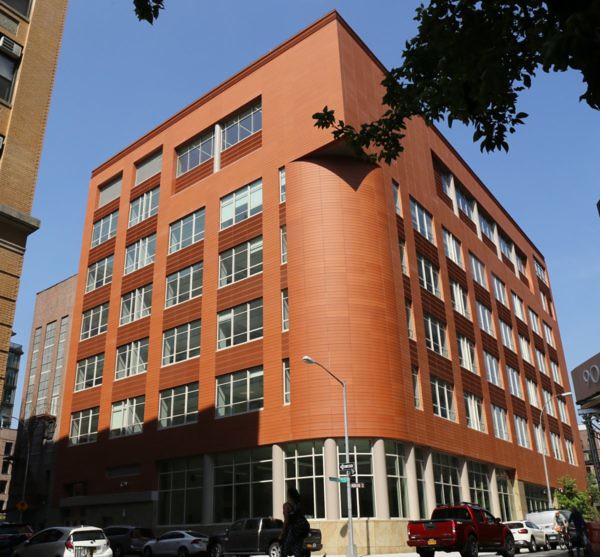 75 Morton (MS 297) is a progressive middle school led by a seasoned, visionary leader, Jacqueline Getz. This shiny “new kid on the block” in the West Village opened in temporary quarters in 2017 but has been in the works since 2005, when a group of parents and educators sought to ease overcrowding in District 2.

In its first year, it shared a building with the Clinton School while its permanent site at 75 Morton [pictured] was under construction.

Students at 75 Morton do not wear uniforms, they call teachers by their first names and they lead their own conferences with parents and teachers. The school community is invited to give input into school decisions, such as deciding the school colors of silver and blue, and the school symbol, the “thunderbolts.”

Getz has been an educator for more than three decades. She’s worked as a teacher, an assistant principal, and a principal at the famously progressive PS 290 on the Upper East Side and, most recently, at PS/MS 126, a high-performing, low-income school in Chinatown.

District 2 Superintendent Bonnie Laboy described Getz in an announcement of the school’s opening as a “steady leader with a warm personality; creative, capable of earning the trust of parents and students,” and the ability to “attract a talented teaching staff.”

Getz has long been a proponent of a rich social studies program, creative academics and family involvement. In her weekly family letter on the school website, she announced the start of a Family Writing Group, inviting parents to “bring a notebook and a pen and an open mind and heart!” She has an extensive background in literacy and has served as a staff developer in the Teachers’ College Reading and Writing project.

The 7-story, handicap accessible building on Morton Street has a large cafeteria, a library and a double height “gym-atorium” with retractable seats. There are three science labs, two art rooms, two music rooms, four reading resource rooms and four small group project rooms. The outdoor play yard on the corner of Greenwich and Barrow will be accessible from the street and the building.

The school does not have a track record, but active parents, a strong opening and a seasoned leader are all positive signs.

How many teachers have 3 or more years of experience teaching?
69%
75% Citywide Average
Years of principal experience at this school
2.1

Shared campus?
Yes
This school shares a building with the MS 260
Uniforms required?
No
Metal detectors?
No