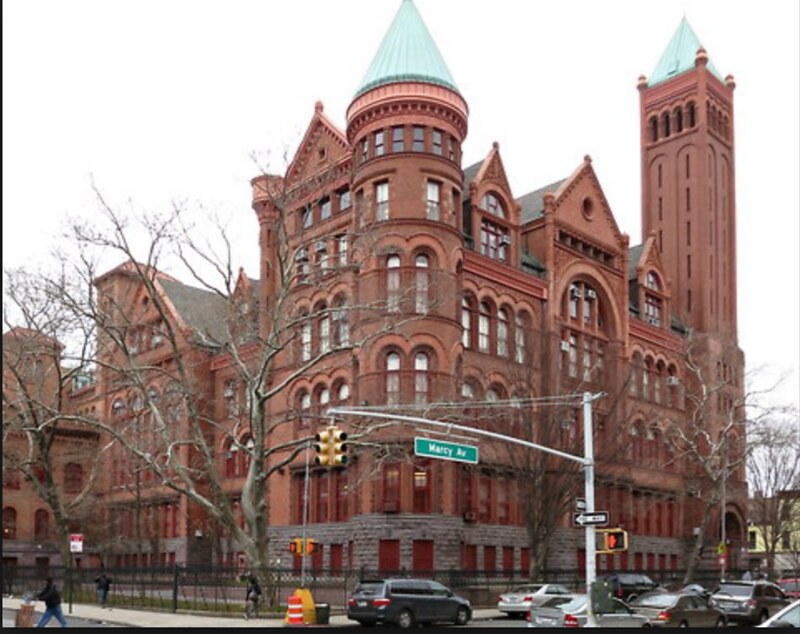 School merged with other school in building.

2012 REVIEW: Bedford-Stuyvesant Prepartory High School, a small school for students who have transferred out of their original high schools, has a hardworking staff and several noteworthy programs to support students, who often come with a troubled academic and personal history.

Building and location: Bed Stuy Prep occupies the second floor of the historic Boys High School building in a residential section of Bedford Stuyvesant. The nearest train, the G, is a 10-minute walk from the brick school building which has well-lit hallways and stairwells. Students must remove their belts as they pass through the metal detectors to enter the school.

Also housed in the building are another transfer alternative high school, Brooklyn Academy High School, the Uncommon Collegiate Charter High School and a GED program. The halls of Bed-Stuy Prep's are lined with student work including book reports, models of cells made of Styrofoam and pipe cleaners, and graded math tests. The building is host to a LYFE center, where students can bring their children from 8 a.m.- 3 p.m. Three of the 14 children enrolled at the time of our visit were children of Bed-Stuy Prep students.

School Environment and Culture: Principal Darryl Rascoe,who formerly taught at Frederick Douglass Academy, a selective college prep school in Harlem, became principal in September 2009. He is committed to improving students' motivation by fostering a sense of community. "We're going to do whatever we can to support the students," he said. "It's not I'm right and you're wrong', they've already experienced that at their other schools, and it didn't work. We're trying to create a sense of belonging here." The principal himself leads one of several lunchtime book clubs and was catching up on the book "The Secret Life of Bees" for his club's meeting.

The school's enrollment of 110 students is way below the city target of 150. This, coupled with low attendance, makes for somewhat empty classrooms; we saw several classes with fewer than five students. The benefit is more individualized attention for the students. We sat in on a Spanish class with two attendees, who collaborated with the teacher to complete the day's assignment, which involved unscrambling the sentences used in a conversation. The downside of such a small size, the principal noted, is the difficulty of forming community-building teams and activities.

Teaching and Curriculum:To beef up their basic skills, Bed Stuy Prep students take double periods of math and English. We saw inspired teaching, with teachers trying very hard to get their students to connect to the subject matter, with varying degrees of success. A social studies teacher led her class in a spirited debate about torture in the war in Iraq; students were clearly interested in talking about a timely topic. The same class proposed writing letters to their congressman about the metal detectors in their school.

There are no AP or honors classes but the school has a popular "Culinary Arts" program, held in a classroom outfitted with ovens, pots, pans, and cooking ingredients. Students who are successful in the course go on to internships at New York culinary academies. Classrooms are outfitted with SmartBoards, electronic blackboards which the teachers can use to bring media into the classroom. We saw one lesson in which the science teacher showed a video about geology in Mexico. Students sat riveted throughout the video and were later able to answer technical questions relating back to their class material.

Bed Stuy Prep is an Izone school, and the increased technology has allowed kids who are more proficient to move ahead on their own with assignments, freeing teachers to give more individualized instruction to others, art teacher Lisa Martin told us in 2012. They may also take classes online.

Some teachers had trouble keeping students' attention. In a computer class where students were creating resumes, one student updated his status on his Twitter account. We saw several students sleeping, and many drifting in and out of classrooms. One student was selling snacks out of a duffel bag during his math class.

Teachers face a revolving student body, typical of transfer schools, and great variation in student levels of preparedness. Some students are parents, and some are homeless or have unstable home lives. Teachers cite the small size of the school as a positive factor-"even if I don't have a kid in my class, I know his name and I can hold him accountable" for his actions, said the culinary arts teacher, "They need that. It's heartwarming to see the turnaround that kids can make here with the individualized attention."

Family involvement: Rascoe is trying to improve historically weak family involvement at the school by creating events for parents to celebrate students' achievements rather than call them in only when there is something negative to report.. The night before our visit, the school held a mid-year awards ceremony to draw parents to a PTA meeting. One teacher said there were more parents than he'd seen in three years' of PTA meetings combined.

After school: The school fields both a girls and boys basketball team together with Brooklyn Academy High School. There is also a weightlifting program, and evening academic classes for students to catch up on credits.

English Language Learners:There were none at the time of our visit.

Admissions:Students may enroll throughout the school year. They must present their transcripts and attendance records from former schools. All prospective students attend a meeting with the parent coordinator and principal to determine the "fit" with the school. Most students are 15 or older and have accumulated at least eight credits, but there are exceptions.

After graduation: "Very few" students from Bed-Stuy Prep go directly to four-year colleges, according to Rascoe, but many go on to two-year schools, including the CUNYs and Medgar Evars College, which has a 2 year/4 year program option. (Amalia della Paolera, December 2009; updated October 2012, Pamela Wheaton)