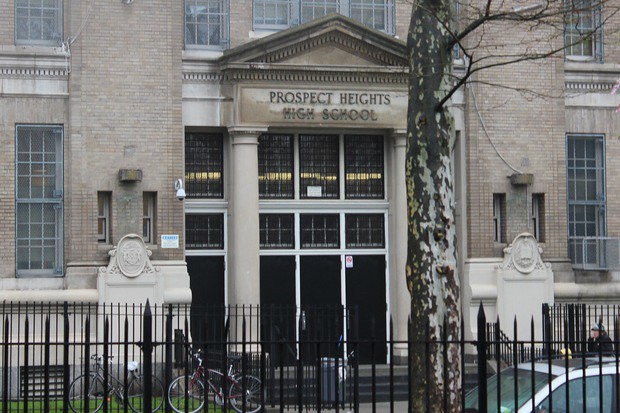 The Brooklyn School for Music and Theater has a partnership with the Roundabout Theatre Company and introduces students to professional aspects of theatre production. Students must audition to be accepted.

The International High School at Prospect Heights creates a cozy atmosphere for new immigrants to learn English. Over 90 percent of students say that their teachers inspire them to learn and 100 percent of teachers reported in the survey that students treat adults in the building with respect.

The Brooklyn Academy for Science and the Environment uses nearby Prospect Park and the Brooklyn Botanic Garden as a laboratory for learning, infusing its curriculum with environmental lessons on a local level. Every student at BASE takes a 9th-grade field science class. However, many teachers complain that order and discipline are not maintained at the school.

Located in Crown Heights just across the street from the Brooklyn Museum, Prospect Heights High School struggled with high crime rates and low academic achievement. However, the school won praise in the early 1990s for what some advocates saw as improvements in safety and academics. In 1991, the school was profiled as a "School of the Week" in Newsday, which recognized the school's achievements, noting, "Graduates have been accepted to and received scholarships from Ivy League colleges and top state universities." Even in 2003, as the school was already phasing out, two students won a citywide science fair. The school was closed in 2006.

Students from the small schools pass through metal detectors to enter the building and though most report feeling safe inside the school, there are concerns about safety on the property outside.

All inquiries about the records and history of Prospect Heights High School should now be directed to the Brooklyn Academy for Science and the Environment. (Aryn Bloodworth, December 2012)

to Franklin Ave-Botanic Garden
Buses: B48