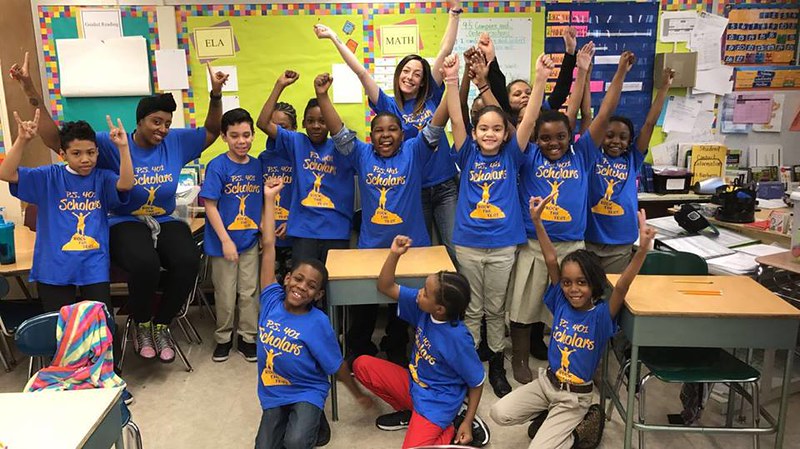 Signs of improvement in test scores and school culture

PS 401 Christopher Avenue Community School opened in 2011 as a replacement school for PS 332, which was closed for poor performance.

PS 401 serves a needy population: more than half the children live in temporary housing, one of the highest rates of homelessness in the city, according to the Institute for Children, Poverty and Homelessness. It serves far more children with disabilities (24 percent) than the charter school (9 percent) in the same building, Leadership Prep Ocean Hill.

Perhaps not surprisingly, PS 401 has poor attendance: more than half the pupils missed more than a month of school in 2015-16, according to DOE data. Poor attendance means teachers have to decide whether to spend time helping absent kids catch up, or move on, despite possible gaps in their understanding of concepts. According to school surveys, teachers struggle to maintain discipline and order in classes. [photo from PS 401 Facebook page]

Deon Mitchell has been principal since 2012. Several years of school surveys show there has been friction between the administration and the teachers but the situation was improving on the 2016-2017 NYC School Survey. And while test scores are still well below the citywide average, they are inching up year by year and approaching the average in Brownsville.

The citys Quality Review also showed improvement in 2016-2017. The administration has been reaching out to families more, according to the yearly plan, by inviting them to coffee with the principal and hosting book fairs and holiday shows, and teachers are working together more.

PS 401 uses a highly structured reading program for struggling readers and the Go Math math program for all students.

How many teachers have 3 or more years of experience teaching?
59%
80% Citywide Average
Years of principal experience at this school
6.4