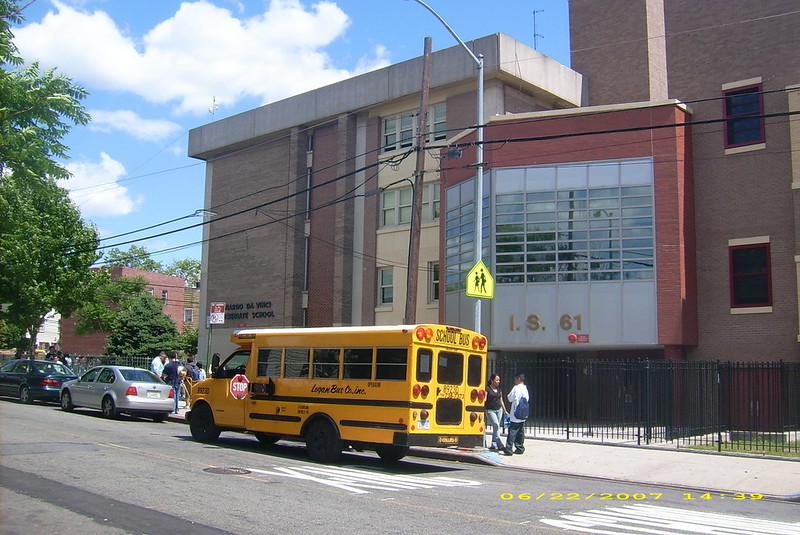 English classes for adults and children

Test scores have a ways to go

A gigantic school with a large immigrant population, IS 61 offers English as a Second Language to children during the day, while adults may take English classes or earn a high school diploma (called a GED), or even take fitness classes, in the evening.

Principal Joseph Lisa took the helm in July 2007 after 10 years as assistant principal, and divided the school into five academies, each with its own assistant principal and guidance counselor, to give it a small-school feel. The school’s culture and tone has improved since then, NYC school surveys show.

The school offers an in-house AGP (academically gifted program) program as an option, in which students are expected to maintain an 85 GPA (grade point average), and take all Regents courses offered by the school.The number of 8th graders who earn high school credits is above the citywide average.

An evaluation of the school by the Department of Education, called the Quality Review, gives the school high marks on the quality of instruction.

The next challenge, according to a goal in the school’s yearly plan, is to raise academic expectations. Test scores, especially in math, have a ways to go. NYC school surveys highlight one area that needs improvement, for example: only roughly half the teachers say students build on each other’s ideas during class discussion.

Students have the opportunity to study theater, music (band and strings), visual art, film, and dance, according to the Arts in School Report. The school also offers dance teams, music, film, art and theater clubs outside regular classroom hours.

How many teachers have 3 or more years of experience teaching?
73%
75% Citywide Average
Years of principal experience at this school
12.1