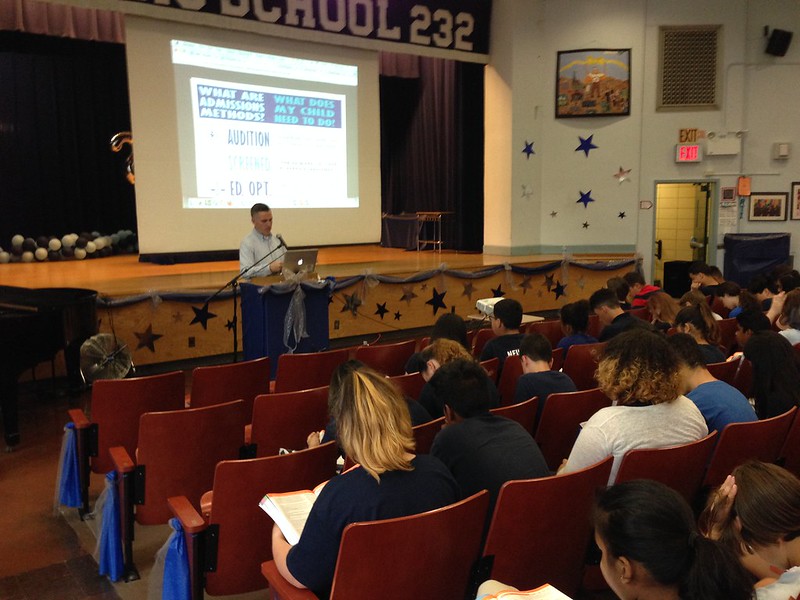 Located on a busy corner in Howard Beach, PS 232 is a K-8 school that boasts good attendance and a solid record of academic achievement. Students feel safe in and around the school, which calls itself PS 232 instead of PS/IS 232 to convey the idea that children at all grade levels are part of a single community.

On school surveys (PDF) , parents and teachers express satisfaction with PS 232 and longtime principal Lisa Josephson. The major challenge seems to be overcrowding. Enrollment has almost doubled since 2006 and, like many in the area, the school is well over capacity.

Since 2005, the school has used the Core Knowledge curriculum, which exposes even very young children to history, geography, civics and science. It is based on the work of E.D. Hirsch, author of Cultural Literacy: What Every American Needs to Know. As part of this approach, the school recognizes and rewards children who portray positive traits. Students read literature that concentrates on characteristics such as honesty, respect and tolerance. PS 232 reports fairly strong test results, particularly in reading, although school leadesr hope to improve scores among students with disabilities and low-performing students, according to its Comprehensive Education Plan

Some 3rd, 4th and 5th graders, including all of those with disabilities, attend a three-hour Saturday morning program for extra instruction in reading and math.

After somemiddle school students grumbled on school surveysthat there was not enough variety in programs, classes and activities, PS 232 launched middle school clubsfor grades 6, 7 and 8. Students in grades 5 through 8 have a computer program, and 8th-graders can take the algebra and earth science Regents exams. All of those who did passed in 2015-16, according to the school.

There are full-time art and music teachers on staff. Additional arts programming comes from Midori & Friends , which seeks to expose children to the arts and music of different cultures; Studio in a School , a visual arts program; and ArtsPower , a theater group.

ADMISSIONS: Neighborhood school. First priority for middle school admissions goes to 5th graders already at PS 232 and then to residents of the elementary school zone. According to the middle school directory, there have been some slots for students who had not attended elementary school at PS 232.(Gail Robinson, based on web reports and DOE data, August 2017. Photo taken from school website)

How many teachers have 3 or more years of experience teaching?
97%
79% Citywide Average
Years of principal experience at this school
14.0