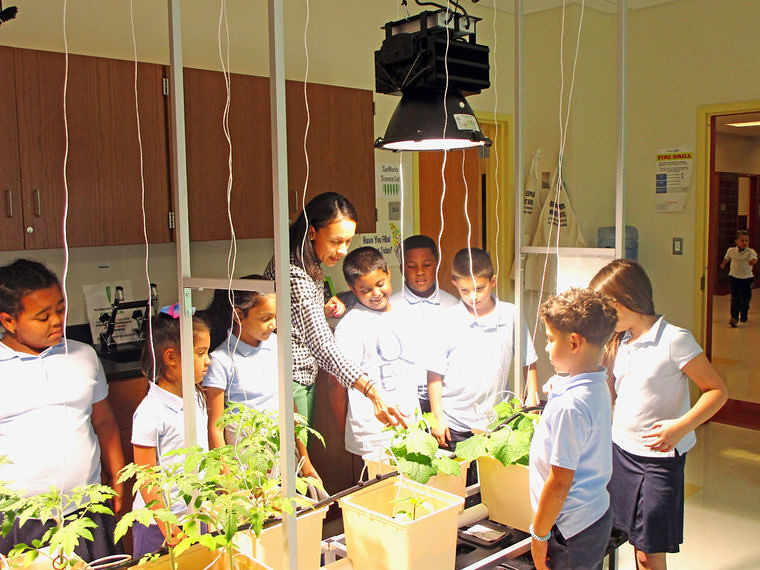 Leader with an innovative vision

Founded in 2014, PS 316 has quickly become a popular choice for families. At this “non-zoned,” or “choice,” school in a beautiful new building, teachers do a good job of reaching kids who learn at different speeds, according to the city’s Quality Review. PS 316 earned “well-developed,” the highest rating, in all areas. According to school surveys, both teachers and parents are happy here.

PS 316 uses magnet grant money to enrich its theme of global conservation and service learning (a magnet school gets extra money for three years and is designed to attract a diverse body of students). Founding principal Melissa Compson is the force behind the school’s innovative curriculum. “The principal’s vision for the school is amazing,” said parent coordinator Barbara Luciano. “The children are constantly learning.” In the school’s hydroponic greenhouse, students grow vegetables like cucumbers and tomatoes, and study nutrition, climate change, conservation and pollution, reports the Queens Chronicle. [photo from Queens Chronicle] Students also take part in five service-learning projects per year, centered on themes such as recycling, with children making grocery bags from recycled material for their parents, for example. One year, students “adopted” a sea creature to study in depth. A maker room is stocked with supplies kids can use to make items for their projects, said Luciano. Additionally, children lead their own parent-student-teacher conferences.

They are also moving, not only in the school’s big yard, with its climbing equipment and track, but also in the ABL (action-based learning) lab, which is like a colorful, number-filled gymnasium. There, students pair math and movement in inventive ways, playing math games with big dice, walking on number lines, and jumping on a bouncy ball as they memorize math facts.

The pre-kindergarten program is large and popular, with a half-dozen classes. “The pre-kindergarten children speak in full sentences here,” Luciano said. They also enjoy block building and tell stories in dramatic play centers. The number of classrooms shrinks each year to make room for upper-grade classes as the school grows to become a full pre-k­ to 5 school by 2019. Unfortunately, this means there isn’t enough space for all the families who would like to stay for kindergarten.

Older children visit the New York Botanical Garden, the Bronx Zoo and Alley Pond, among other destinations that support the school’s themes. Pre-kindergartners do not leave the building for trips, but visitors come to them, such as a group that performed a play about the layers of the rainforest. Pre-kindergarten and kindergarten students watch live chicks hatch at school.

The school community raises money for causes such as people impacted by Hurricane Maria in Puerto Rico, according to the school’s Facebook page.

How many teachers have 3 or more years of experience teaching?
82%
80% Citywide Average
Years of principal experience at this school
5.1