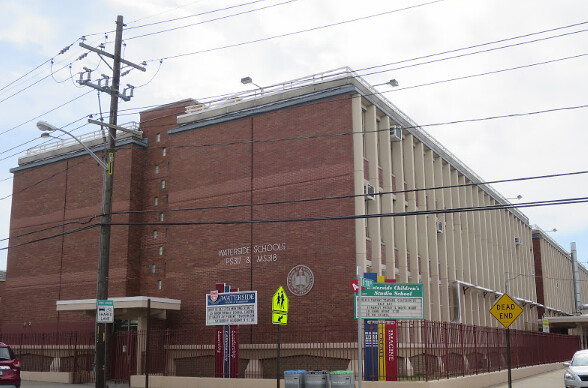 Test scores are well below the citywide average

Just steps away from the Atlantic Ocean, among bungalows and high-rise apartments, tiny Waterside School for Leadership shares a large red brick building with the Waterside Children’s Studio School, an increasingly popular elementary school. Both opened in September 2009 to replace PS 225. Waterside has a dual language program where native English and Spanish speakers do work in the two languages with an eye toward becoming fluent in both. Almost one-third of all students have special needs and, while test scores have a ways to go, Waterside helps these children feel included in all activities, according to school surveys.

Founding Principal Linda Munro gets high marks from teachers and parents, almost all of whom report she is an effective manager, according to a Department of Education survey. Students and teachers responding to the survey said the school atmosphere is supportive and respectful and the buildings and its surroundings exceptionally safe.

A downside: Academic achievement remains well below the citywide average. In its Comprehensive Educational Plan, the school acknowledged it has  “struggled to increase proficiency levels on the NYS math and ELA examinations” and said improving math instruction is “a priority.” Waterside is targeting what it calls “cusp” students – those who fall within several points of proficiency and providing them with additional help.

SPECIAL EDUCATION:  Waterside has an unusually high percentage of students with disabilities and offers services including self-contained classes and team teaching classes with a mix of general and special education students. Partnerships with Counseling in School and Child Center of New York provide support for many students but particularly those with emotional disabilities.

ADMISSIONS:  The school accepts students from its zone for its general program. Students from throughout Queens may apply to the dual language Spanish program, with priority to Spanish language speakers. (Gail Robinson, from DOE documents, September 2017)

How many students were suspended?
10%
3% Citywide Average

How many teachers have 3 or more years of experience teaching?
59%
75% Citywide Average
Years of principal experience at this school
10.1

Shared campus?
Yes
This school shares a building with PS 317
Uniforms required?
No
Metal detectors?
No