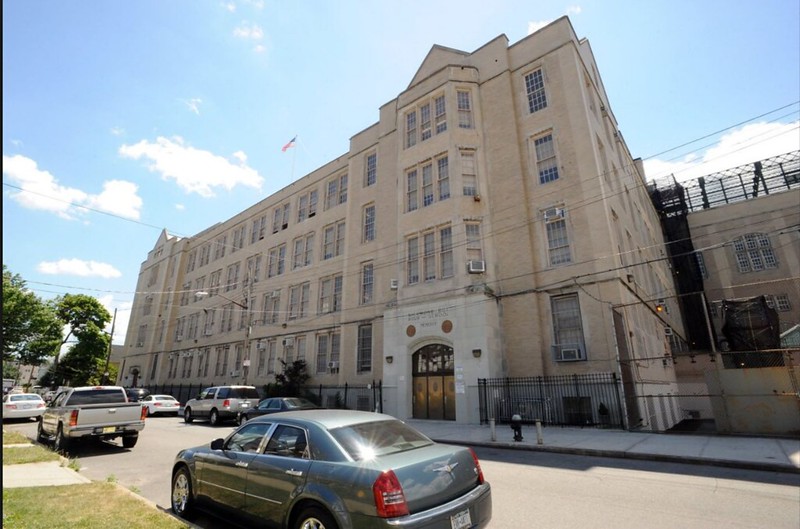 Richmond Hill is a large, comprehensive high school founded at the turn of the 20th century that prepares students for careers while also offering college preparatory classes.
The school is divided into academies, each of which has classes tailored to a theme and opportunities for internships: software engineering; criminalistics and forensics; health sciences; a certified career and technical education program in hospitality and tourism; art and design; and robotics and engineering. Except for forensics, which 8th graders apply to directly, students enter these programs in 10th grade.
The school offers supports for struggling students and college credit classes for more academically advanced ones. Neil Ganesh, an immigrant from Guyana and former teacher and administrator at Jamaica High School who became principal in 2013, runs a program called Lions Pride to give extra help to lower-perfoming students.
The school has gone through a tumultuous decade. It was threatened with closure because of poor performance in 2011-12, but was saved by a successful lawsuit. In 2014, the city put Richmond Hill on its list of low-peforming Renewal Schools, and in 2015, it landed on a state list of struggling schools that would have to change or face being taken over. The school improved enough to be taken off the state list a year later, and it has met some, though not all, the targets set for it under the Renewal program.
Ganesh gets high marks from teachers on school surveys. The school has high expectations for students; teachers visit one another's classes to share best practices, according to an educator who visited the school for its Quality Review.
Graduation, college readiness rates and attendance have all improved though still lag somewhat behind the city average. And the difficulties have taken their toll. Enrollment, which once topped 3,600,has fallen to around 1,600. On the upside, this has alleviated the severe overcrowding.
There are many sports teams and an eclectic mix of clubs and activities.South Asian Youth Action (SAYA!) Operates sports programs and other activities at the school.
Special education: The school offers team teaching classes with general and special education students as well as services for students in general education classrooms. Richmond Hill has a large number of students learning English.
Admissions: Students who live in the attendance zone are guaranteed admission. The criminalistics program, which screens students based on their middle school records but has lenient standards. Students interested in other academies apply to the Career Exploration Academy, which selects students according to the educational option formula designed to admit a mix of students. The programs do not fill all their seats, and the school accepts some incoming 10th graders. (Gail Robinson, DOE statistics and news reports, November 2018).
Read more

How many teachers have 3 or more years of experience teaching?
85%
76% Citywide Average
Years of principal experience at this school
5.9

This academy prepares students for various 10th grade career-themed options. Based on students' ninth grade interests, they can choose from the following options: Software Engineering, Hospitality & Tourism, IT, Engineering & Robotics, Health Sciences, Art & Design, and A+ Certification. Participation in these academies leads to internship opportunities and work-based learning opportunities. Partnerships with both SUNY, CUNY, & St. Francis College allow students to earn up to 18 college credits.

This interdisciplinary program allows students to study the legal and scientific aspects of forensics. Students engage in hands-on lab skills, such as fingerprinting, handwriting, and blood splatter analysis. Students explore how this scientific evidence can be used by the justice system, participating in moot court competitions and mock trial experiences. Many students in the Criminalistics and Forensics Institute go on to study at John Jay College of Criminal Justice and other top schools.

Based on students' ninth grade interests, they can choose from the following options: Software Engineering, Robotics, Hospitality & Tourism, Engineering, Health Sciences, Art & Design, and A+ Certification. Participation in these pathways leads to internship opportunities and work-based learning opportunities. Partnerships with both SUNY and CUNY allow students to earn up to 18 college credits.