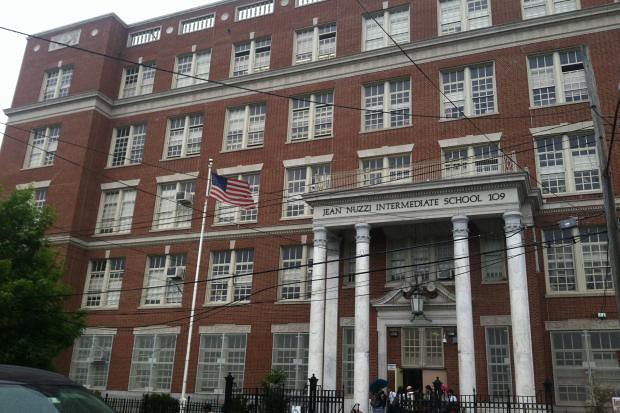 Jean Nuzzi IS 109 is a large fairly diverse middle school in Queens Village that has gone through some difficult times, but seems to be turning things around under a stable leader. Enrollment is on the rise and the atmosphere has improved.

Located in a quiet, residential neighborhood, the school is housed in an old, five-story red brick building that originally served as an elementary school. It has an auditorium large enough to accommodate one full grade at a time, a gym, cafeteria, small library and three outdoor yards.

In 2016, the Department of Education sought to put a charter school in the building. Although the school and its allies successfully blocked the move, declining enrollment was a problem, some local officials said the school was in poor repair, and bullying has been an on-going concern, according to school surveys.

School leaders have worked to improve the environment at Jean Nuzzi, ensuring that every student has at least one adult in the building he or she trusts and can turn to for support. The school has adopted the Positive Behavior Interventions and Supports program to improve climate and student behavior.

During the first three years of the program suspensions fell by two thirds, according to a Department of Education report, prompting one parent to say, "This is a completely different school, a different atmosphere, a major improvement from three years ago." A majority of students responding to a DOE survey, though, still see bullying as a problem at the school.

For years the school had been plagued by poor performance, high faculty turnover and unruliness; between 2007 and 2011 the leadership changed several times. In a phone interview, Parent Coordinator Arketa Sherron said middle school choice hit IS 109 hard as parents opted to travel to other district schools or charter schools, and some put their children in Catholic schools.

However, Sherron said, the school is more than stabilizing, under the leadership of Principal Karleen Comrie, who took the helm in 2011. Comrie was herself an IS 109 student, lives in the neighborhood and worked her way up from science teacher to assistant principal to principal.

In August 2017 the school enrolled 100 more sixth graders than the previous year--from 300 to 415 students. "We have a great administration, teachers are caring, we all work as a team," Sherron said. "Things are not falling through the cracks," she added. "We reach out to parents to have them come in if there's a problem."

There is still work to do. Many academic and other measures are about average for New York City schools though Nuzzi students lag behind their counterparts in scores on the state standardized math test.

SPECIAL EDUCATION: Nuzzi offers self-contained classes as well as team teaching classes with two teachers and a mix of general education and special education students. The school says it has a history of success moving students into less restrictive classes. In its Comprehensive Education Plan, school leaders highlighted low scores by students with disabilities in self-contained special education classes as an area of concern, and said it was instituting programs, including a Saturday Success Academy, to address that.

ADMISSIONS: Nuzzi admits students first from its zone and then from elsewhere in District 29. There were fewer than two applicants for each seat, below the city average, and, in 2016, the school did not fill all of its seats set aside for special education students. (Gail Robinson, based on web reports, interview and DOE data, August 2017; photo from the web)

How many teachers have 3 or more years of experience teaching?
84%
75% Citywide Average
Years of principal experience at this school
7.7