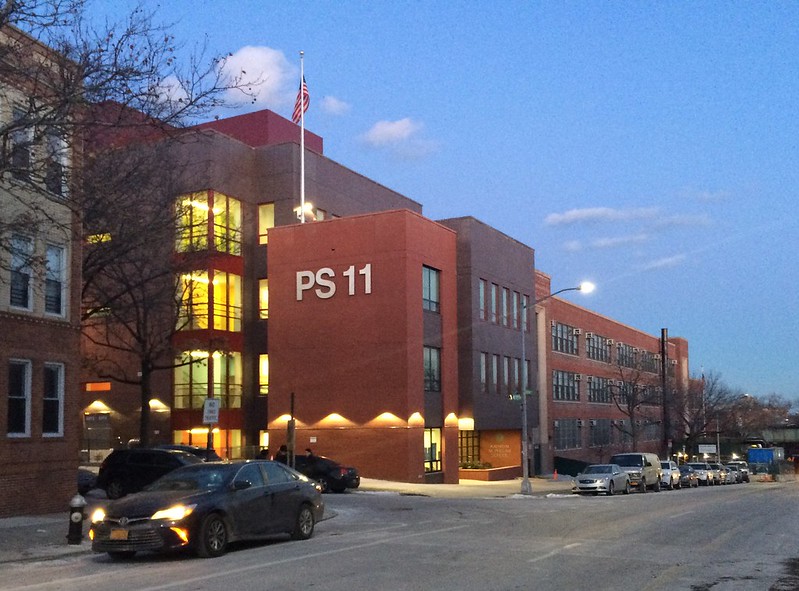 Waitlist in some grades for the after-school program

On career day at PS 11 in Woodside, parents talk to kids about their jobs. Among them are college professors, crossing guards, emergency medical technicians, teachers, school administrators, cab drivers, bakers, and shop owners and their employees. The owner of the new Japanese restaurant is a parent, as is the owner of a new hipster coffee shop.

The surrounding community has changed from a primarily Irish population to one where 50 different languages are spoken, but PS 11 continues to provide a solid education for its students. Teachers are experienced, with the majority of them having taught for more than 10 years. Despite the school’s huge size, teachers seem to love PS 11, according to sparkling school surveys.

Elizabeth Peña-Jorge became principal in 2014 but has been with the school since 1994. She oversaw the opening of a brand new building on school grounds that replaced a formerly cramped building in 2017 and now houses grades K–2. “It’s beautiful,” says Peña-Jorge. In addition to the lower grades, the space houses two art rooms, a science room and a media center.

The school has a growing population of young professional parents, says Peña-Jorge, as well as families who own apartments and houses in the neighborhood and those who live in the homeless shelter near the school. “It’s high-middle- to lower-income families,” she says.

The school serves students with different needs in a variety of ways. For example, it has six small “self-contained” classes, team-teaching classes that integrate children with special needs into general education classes, and “freestanding” ESL (English as a second language) classes for kids still learning English. These children remain with a specialist all day to get extra help.

The principal says a drama program in several grades is designed to get kids talking, acting and improvising, to help them learn new words in a fun way.

PS 11 has enough children living below the poverty line to qualify as a Title 1 school, which means it receives extra money to level the educational playing field. A downside, however, is that the after-school program is limited to 250 kids, so there is a waitlist in some grades.

How many teachers have 3 or more years of experience teaching?
96%
80% Citywide Average
Years of principal experience at this school
5.1