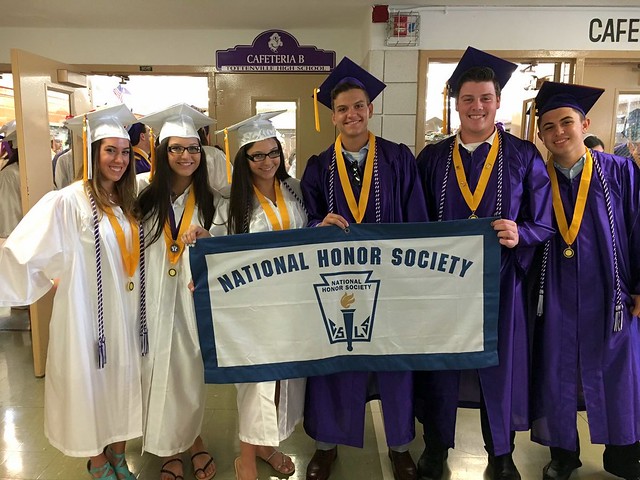 A large school may be overwhelming for some

Tottenville High School is a large, bustling neighborhood school on the southern tip of Staten Island. It mainly admits students who live in its zone, though there are three small programs that are open to all Staten Island students: two selective institutes—one in humanities and one in math and science—for very high-performing students and a Marine Corps Reserve Officer Training Corps (ROTC) program.

Typical of large schools, Tottenville’s size is its strength. There’s a broad selection of courses including honors sections in select subjects, as well as clubs, sports, internship opportunities, programs in the visual and performing arts, and a marching band. Students may study Italian, Spanish or Latin.

While students do not have to specialize in a specific talent or area of interest, there are opportunities to do so. Beginning in 10th grade, students may choose to join one of several CTE (career and technical education) programs where they take a three-year sequence of courses (in addition to a full academic workload) in one of several areas: finance, law, advertisement and design, architecture, automotive, TV production, computer science, culinary arts or health careers (medical or dental assistant paths).

College-level courses are plentiful and many students take at least one or earn professional certification in a skill by graduation. In addition to a nice range of Advanced Placement classes, students may earn college credit for free by taking courses at Wagner College and St. John’s University (Staten Island campus), or at Tottenville through a College Now partnership with Kingsborough Community College.

The school’s graduation rate and percent of students graduating with an Advanced Regents diploma exceed the citywide average.

Joseph Scarmato, a Tottenville parent himself (his three daughters attended), has been principal since 2014. A longtime educator with experience in both small and large high schools, Scarmato was the founding principal of the High School for Medical Professions and, prior to that, was an assistant principal at New Utrecht, both in Brooklyn.

Since his arrival, Scarmato has made changes to ensure that kids don’t feel lost or slip through the cracks in such a large school. He eliminated multiple sessions, so all students are now attending school across the same set of 10 periods each day. To cut down on lateness, classes are generally clustered by grade level in the same part of the building. For instance, sophomores don’t have to travel far when moving from their English to their history class.

Change is hard and some teachers don’t feel there’s a clear vision for the school, based on responses to the NYC School Survey, though most students say there are plenty of options to develop their talents and keep them interested.

Tottenville has a high rate of college admissions. Graduates attend a range of schools, including CUNY, SUNY and private colleges. Top students have been admitted to highly selective schools in and out of state.

The school is also home to a Young Adult Borough Center (YABC), which is an evening academic program that caters to high school students who are behind in credits or have adult responsibilities that prevent them from attending school during the day.

SPECIAL EDUCATION: There is a wide range of special education services, including self-contained classes and ICT classes as well as occupational, physical and speech therapy. The school has an ASD Nest program that gives extra supports to a small group of students with an autism spectrum disorder (ASD) who are otherwise fully integrated into Tottenville classes.

Tottenville is one of several sites that form The Hungerford School, which is part of the citywide district (D75) for students with severe disabilities.

ADMISSIONS: Students who live in the school’s zone are guaranteed admission to the zoned program only but are encouraged to apply to the other programs that are open to all Staten Island students. Admission to the two selective institutes (Classics and Science) is based on a review of students’, grades, state test scores and record of attendance and punctuality. The Marine ROTC program accepts students according to the educational option formula, wihich is designed to admit a mix of low- average- and high-performing students. (Laura Zingmond, interview and news and web reports, March 2018)

How many teachers have 3 or more years of experience teaching?
89%
76% Citywide Average
Years of principal experience at this school
5.1

The STEAM Academy is comprised of five programs within the growing 21st century STEAM and related industries: Dental Office Technology, Medical Technology,Computer Science, Architecture and Finance. Each STEAM program is taught by teachers with experience from their respective fields. Each STEAM program has state of the art classrooms which provide students with an exceptional learning experience. Advanced Placement and college level courses as well as internships available for eligible students.

The Marine Corps JROTC program is co-sponsored by the Department of Education and the US Marine Corps. The curriculum is divided into three areas: academic, military, and physical fitness, and is designed to provide students with a sense of leadership and self-discipline.

This four-year program is designed to challenge those students who are not only strong in the humanities and language areas, but also interested in pursuing careers in these or related professions. This four-year rigorous program, requires a serious commitment to adhering to the guidelines of the four-year curriculum. In addition to fulfilling all program requirements, students in this program are required to study languages other than English including Mandarin, and Spanish or Italian.

This is a three year sequence of courses related to the legal professions. Our state of the art courtroom exposes students to real world applications, practical skills and knowledge of the inner workings of the legal system. Out of the classroom learning experiences include, AP and college level courses, field trips as well as mock trial, debate team and internships.

This is a CTE certified program designed to train students in this advancing field. In our state of the art facility, students are taught through hands on projects by certified teachers on systems such as engine repair, electronic engine controls, computerized alignment, green technology, etc. Graduates are employed by new car dealers, repair/service stations, and the NYPD, FDNY, NYC Transit and NYC Sanitation. AP and college level courses as well as internships offered to eligible students.

The Culinary Arts Academy is a three year sequence of courses that provides an exciting hands-on approach preparing students for entrance into the field of Restaurant Hospitality. Students work in a professional atmosphere, with an acclaimed chef who is a certified instructor. The classroom is a fully-appointed, professional kitchen. The program explores the fundamentals needed in the food industry. AP and college level courses as well as internships are offered to eligible students.

This three year program will develop learners that have the ability to acquire knowledge and skills that are needed to move an idea to a commercial reality. Students will collect, gather, synthesize, analyze, present data, and communicate effectively within the global community, participate in hands on projects, producing ads, as well as public service announcements for professional agencies, including the DOE. AP and college level courses as well as internships available to eligible students.

This four-year program is designed to challenge students who are strong in math and science and are interested in pursuing careers in these or related professions. This is a four-year rigorous program, that requires a serious commitment adhering to the guidelines of the 4 year curriculum. In addition to fulfilling all high school requirements, students take a minimum of two college-level science classes and one year of college-level math.

Shared campus?
Yes
This school shares a building with another school.
Metal detectors?
No