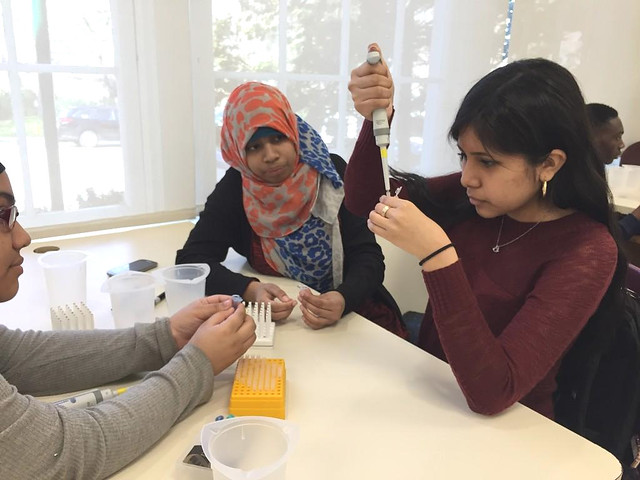 Students at the High School for Medical Professions (HSMP) learn about health professions through field trips, hands-on projects and internships. Students also volunteer at nearby hospitals and nursing homes. The school’s graduation rate exceeds the citywide average, including for those with special needs and who are learning English.

All students take a course in health career explorations and classwork incorporates hands-on projects, such as learning CPR and studying physiology by dissecting animal organs. Beyond that, students' main exposure to health professions is through community service and some field trips to places such as DNA labs and hospitals. Ninth through 11th-graders complete their mandatory community service at nursing homes; seniors do theirs at hospitals.

To bolsters students’ writing skills, the school uses a structured program called the Hochman Method. Teachers in all subjects use this writing method, which means they use the same language and practices whether it’s a math teacher discussing how students should explain their approach to solving a problem or a history teacher critiquing essays.

Students participate in daily advisory groups lead by a teacher who keeps tabs on students’ academic and social-emotional growth by helping them develop skills in time management, decision-making, and goal-setting.

HSMP adopted a restorative justice program, which aims to minimize suspensions and promote positive behavior among students through conversation, reflection and corrective action. In addition to the advisory groups, teachers lead “circles,” small student groups that focus on building trust and addressing problems before they escalate.

There are few elective classes beyond Advanced Placement courses in the upper grades.

Pauline O’Brien became principal in 2014, replacing the school’s founding principal, Joseph Scarmato, who left to take the helm at Tottenville High School. Previously, O’Brien was an assistant principal at the school and a special education teacher.

HSMP opened in 2008 and is housed in the Canarsie Educational Campus building, which it shares with the Urban Action Academy and the High School for Innovation in Advertising and Media. Students in all schools may participate in campus-wide sports teams.

ADMISSIONS: Admission is based on the educational option formula, which is designed to admit a mix of low-, average- and high-achieving students. (Laura Zingmond, web reports, December 2018; photo from school's website)

How many teachers have 3 or more years of experience teaching?
75%
76% Citywide Average
Years of principal experience at this school
5.9

How many students with disabilities graduate in 4 years?
79%
66% Citywide Average

Our program utilizes many partnerships with community based organizations to provide exposure to different healthcare professions. Overall academic performance will determine the access to these opportunities for individual students.