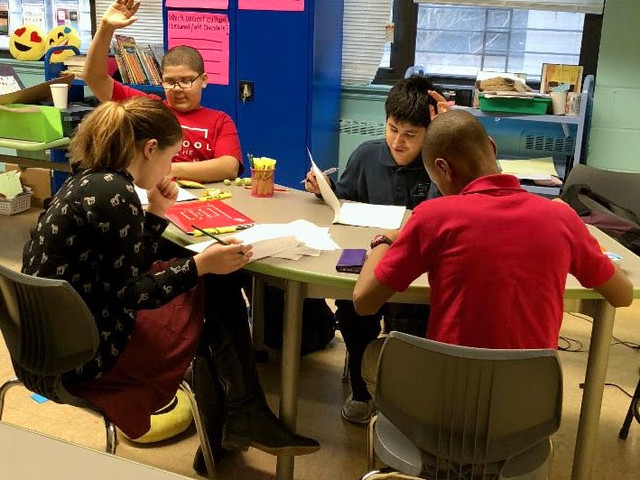 Too soon to tell

At School in the Square (S2), a small charter middle school, students pursue their interests in daily “passion” classes and have a rich social studies curriculum. Opened in 2016 with a sixth grade, the school graduates its first class in 2019.

S2’s leadership includes founder and executive director Evan Meyers and principal Carrie Amon. Previously, Meyers was part of the founding faculty of the High School for Language and Diplomacy, where he taught history. Amon is a longtime educator who spent most of her teaching and administrative career in Mamaroneck’s public schools.

The school day runs longer than at a traditional public school, which allows for scheduling of additional periods of math and English during the week as well as time for extracurricular activities.

A unique feature of the school is its commitment to students’ exploration of interests. They choose a “passion” elective class, such as cooking, coding, rugby, art or music, which they take daily in addition to their academic courses.

Through a partnership with Facing History, an organization that promotes the value of a good civic education, instruction in social studies weaves in themes of identity, social justice and community service.

Field trips are a big part of learning. Students visit venues across the city, such as the Museum of Modern Art and BioBase, a community science lab in Harlem where students conduct experiments. Fun trips to baseball games and campsites are also scheduled.

The school has adopted a “restorative justice” approach to discipline that minimizes suspensions and promotes positive behavior through conversation, reflection and corrective action.

Classes are scheduled from 9 a.m. to 4:30 p.m., but children may arrive as early as 8 a.m. and stay until 5:15 p.m.  Tutoring is offered before and after school as well as on Saturdays. Sports, including soccer, rugby and cheerleading, are offered after school.

S2 has its own dedicated building that is the former site of a parochial school.

ADMISSIONS: By lottery with preference to District 6 residents. The school accepts new students in all grades, space permitting. (Laura Zingmond via interview and web reports, March 2018)