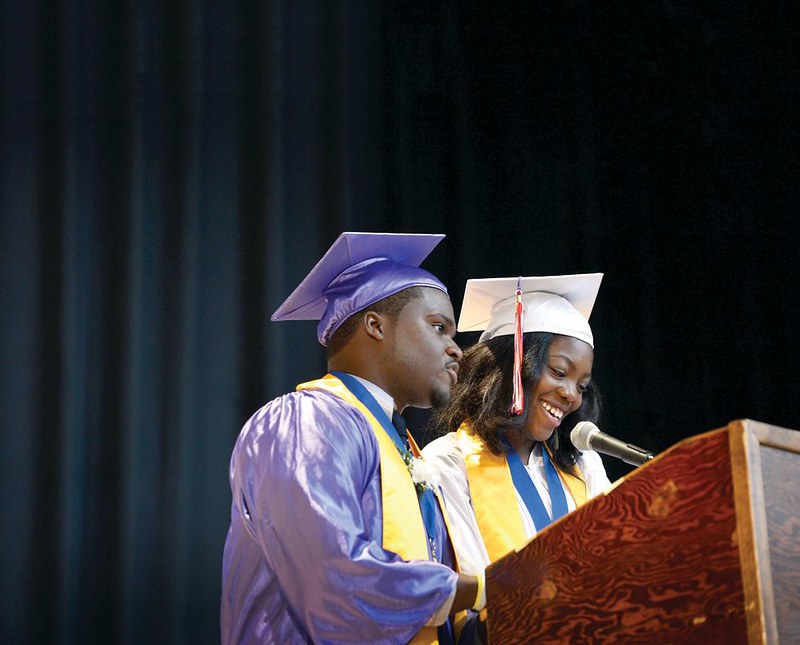 Housed in the mammoth John F. Kennedy High School Campus, the New Visions Charter High School for the Humanities (HUM) opened in 2011, along with a sister school that has a focus on math and science. They share the building with five other high schools. Humanities is safe and orderly, with strong leadership, but has a ways to go in getting graduates ready for college-level work.

Humanities (HUM) is part of the New Visions Charter High Schools network created by New Visions for Public Schools, a nonprofit organization that has worked to strengthen NYC public schools since 1989.

Lessons are designed to be relevant to students’ lives, involving teens in discussion and projects, rather than scripted lessons, according to curriculum published online. Ninth graders delve into themes such as identity and society, for example. They ponder questions like, How should students design their own government? Rather than always work from a textbook, they may work in pairs or groups to solve a real-life problem in math or science. Students three tackle anchor projects in the older grades, researching issues that affect their community, such as gang violence or interactions with police, according to the school website.

The New Visions network has eight charter schools and prides itself on small classes with an average of 20 students. The school day is from roughtly 8:30 am to 3:30 pm on Mondays, Tuesdays and Thursdays with shorter days on Wednesdays and Fridays. Ninth and 10thgraders must attend a summer program in August.

Students who arrive with low skills take double subject periods in core academics in 9th and 10th grades, with a focus on reading, writing and speaking. In the first semester of senior year, students do six pieces of formal writing. HUM offers advanced placement courses, including AP US History and AP Spanish, as well as College Now courses.

HUM and AMS students enter the JFK building via a bridge on the fourth floor, avoiding the ground floor congestion, although they must pass through metal detectors.

ADMISSIONS: By lottery. Students must fill out an application typically by April 1st. Applications received after the deadline will automatically be placed on a waitlist. Admissions ongoing until all seats are filled. Email [email protected] or visit www.newvisions.org/admissions for more information. [photo courtesy New Visions] (Lydie Raschka, school data and email correspondence, January 2020)

Years of principal experience at this school
7.0

How many students miss 18 or more days of school?
37%
38% Citywide Average