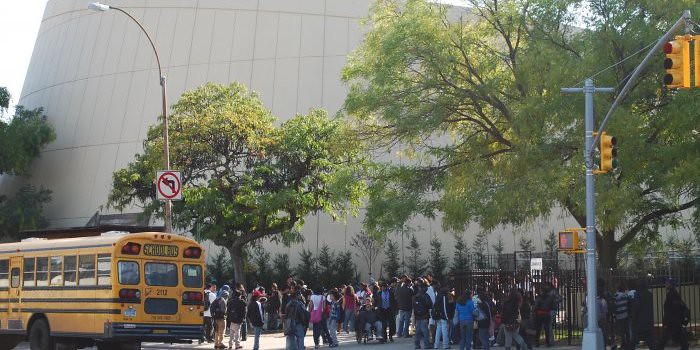 Academics are a work in progress.

After years of struggling with poor discipline and low academic performance, Lehman High School may be making a comeback. John Powers, formerly an assistant principal at Bronx High School of Science, became principal in 2015 and has hired some of his former Bronx Science colleagues to help reinvigorate the teaching. Attendance, while still below the citywide average, is increasing. Teachers feel more positive about the school, according to annual surveys.

Lehman High School, open to all who live in the attendance zone school, has just 750 students, a sharp decline from 2008 when it had more than 4,300.

The gigantic Lehman Campus building, which houses more than 4,000 students, is divided into six schools. The principals of all six schools meet frequently and plan together to expand opportunities for their students. For example, each small school opens its Advanced Placement classes to all students in the building. The schools share sports teams and a newly renovated library. The principals are all committed to restorative justice, the practice of improving discipline by encouraging students to make amends to those they have wronged, rather than simply punishing them.

Although many students fail to graduate on time, the top Lehman students have been admitted to very selective colleges, including Yale University, William and Mary, and Sophie Davis, the CUNY School of Medicine, Powers said. And teachers take care to ensure that even students who drop out of high school have opportunities by, for example, helping them enroll in the Job Corps training and GED program, Powers said.

How many teachers have 3 or more years of experience teaching?
68%
76% Citywide Average
Years of principal experience at this school
4.0

Our honors program is committed to challenging students and preparing them for college. We boast a 100% graduation rate for the honors program. Students move as a cohort through honors and Advanced Placement courses. Student supports include SAT preparation course, college visits and college essay writing.