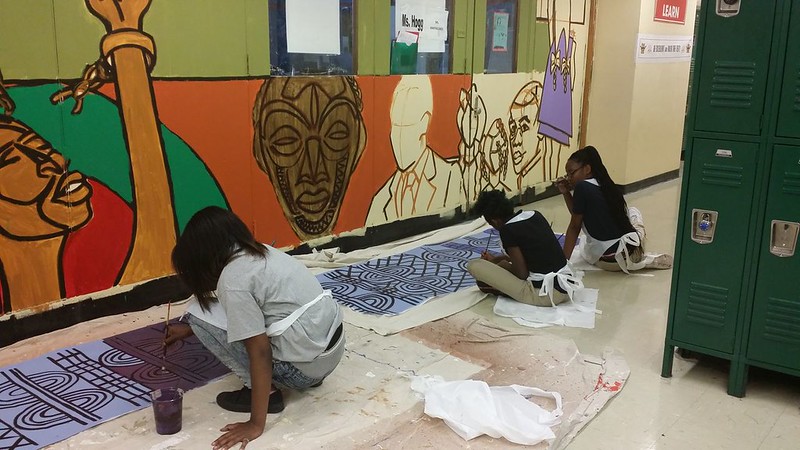 Located in a somewhat forbidding brick building in one of the city’s poorer neighborhoods, the East New York Middle School of Excellence is a small middle school that shares its building with the East New York Elementary School of Excellence. The middle school says it has a commitment to social justice and seeks to help its students, who are black and Hispanic, “cherish and preserve their ethnic and cultural identity.”

The school has new science labs and a number of partnership designed to provide academic enrichment and help and social support to its students. Students may participate in a number of activities, many of them after-school, including rugby, robotics, musical theater and the City Parks Foundation’s Seeds to Trees program. In a project done in collaboration with the community arts group Groundswell, ENYMSE students created three large murals on the history of African Americans and other people of color. [mural photo from Groundswell]

In many ways ENYMSE appears to be a nurturing and collegial place. All students have an advisor called a STAR coach. Teachers  responding to a Department of Education survey give principal Malik Small high marks, and most said they liked working at the school. Parents in the same survey  praised the school for being welcoming, keeping them informed and giving them opportunities to be involved.

However ENYMSE has its struggles. In January 2019 the state named it a Targeted Support and Improvement School, a designation for low-performing schools.  Test scores remain low and, although it offers the living Environment Regents, very few student leave the school with any high school credit. Bullying and chronic absenteeism are particular problems.

How many teachers have 3 or more years of experience teaching?
81%
75% Citywide Average
Years of principal experience at this school
7.0

Shared campus?
Yes
This school shares the building with its elementary school
Uniforms required?
No
Metal detectors?
No