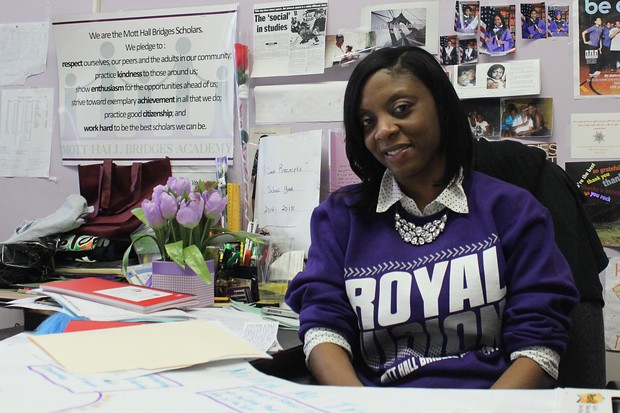 Test scores have a ways to go

Founded in 2010, Mott Hall Bridges Academy is a tiny, well-run middle school where teachers and administrators give teens a sense of possibility beyond the tough neighborhood where they live.

Sixth graders walk across the Brooklyn Bridge every year, an excursion that has come to symbolize the connection between students past, present and future, said Principal Nadia Lopez in a PBS Newshour interview.Some children have never been on a bridge before and worry it will collapse, just as some have never visited a peaceful, safe setting like the South Street Seaport, another trip children take with their classmates.

The school is located in Brownsville, where the unemployment rate is high and incomes are very low. Lopez meets kids where they are, gently encouraging growth rather than a one-size-fits-all approach. If a child wants to get a retail job right out of high school, she will suggest he try to work up to manager, she said, in a July 2017 interview in The Atlantic. Instead of pushing teens to go to college, she asks them to consider it. Success is relative to a person and their circumstances, she was quoted as saying in the article. [photo of Lopez from dnainfo.com]

In 2015, Lopez was thrust into the national spotlight when 13-year-old student Vidal Chastanet had a chance encounter with Brandon Stanton, of the popular blog Humans of New York. When asked about the most influential person in his life, Chastanet mentioned Ms. Lopez.

When we get in trouble she doesnt suspend us, he said in the brief interview, which was liked more than one million times on Facebook. She calls us to her office and explains to us how society was built down around us. And she tells us that each time somebody fails out of school, a new jail cell gets built. And one time she made every student stand up, one at a time, and she told each one of us that we matter.

The post resulted in a fundraiser that earned $1.2 million for Mott Hall Bridges and the surrounding community. The school uses the money to fund a five-week summer camp focused on Science, Technology Engineering, Arts and Math (STEAM) activities, such as chess, robotics and sewing. It helps pay for college trips.

The school has a robotics club to build underwater remotely operated vehicles, plus culinary and dance programs. Teens in the LAB Rats science club do dissections, and take field trips. The school has girls and boys empowerment groups, a step team, flag football, softball, track and field, and other activities, according to the website.

Children wear uniforms and community service is required. Teens can get after school help in the Bridges Intervention program. High achievers may take an advanced algebra class.

Test scores are about average for the district, but inching up. One hundred percent of teachers would recommend the school to other families, an unusually enthusiastic response. Children with special needs are included in all activities, and perform better on tests than the district-wide average, according to school data.

The school faces competition from four nearby public middle schools, and at least three charter schools, within a half-mile radius. Mott Hall shares a building with PS/IS 323, a pre-k 8th grade school with about 500 children.

ADMISSIONS: Lottery. There were two applicants per seat in 2017. Priority to students in District 23 who sign in at a school fair or open house. (Lydie Raschka, web reports, August 2017)

How many teachers have 3 or more years of experience teaching?
78%
75% Citywide Average
Years of principal experience at this school
9.1

Shared campus?
Yes
This school shares a building with PS/IS 323
Uniforms required?
No
Metal detectors?
No