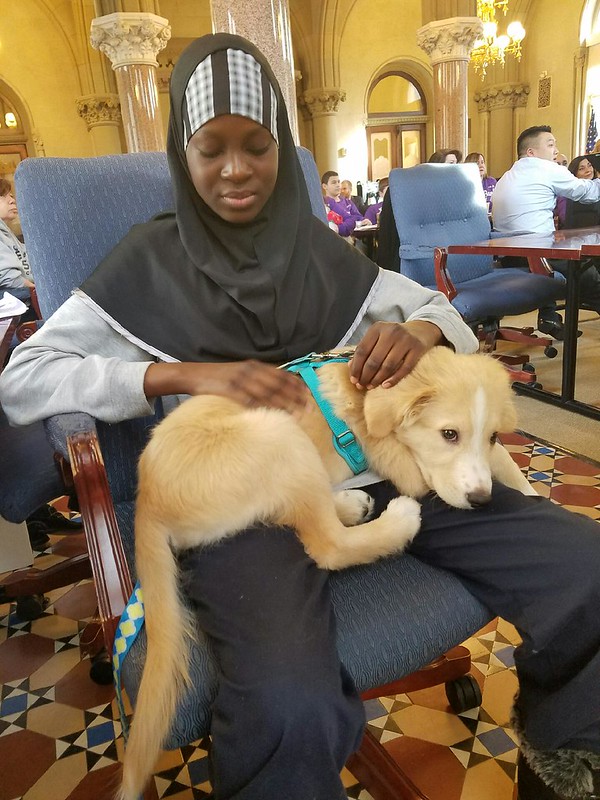 Located on the top floor of a former Catholic school building on a residential street in Park Slope, Park Place Community Middle School offers a safe, cozy space for District 13 students. The tiny school has a digital and an arts focus, and offers a longer school day as part of the citys middle school initiative.

An ArtsConnection grant, aimed at linking academics and the arts, allows the school to stay open until 6 pm and offer homework help, leadership skills, theatre, dance, and the production of musicals such as Fame and Hairspray.

Every child learns to play an instrument, said Principal Glenda Esperance, whether it is a string instrument, percussion or woodwinds. The school band has performed at citywide functions including the Macys Fourth of July parade, accompanying professionals such as Gloria Estefan.

We are not an arts school but we do really believe in children having opportunities to display their talents not only in academics but in other disciplines as well, said Esperance in a telephone interview.

Many students come from economically disadvantaged households and enter the school unprepared for rigorous middle school work, said Esperance. They do not score well on state tests. There has been some progress in English Language Arts test scores but math scores have remained stagnant so the school is working with outside math consultants to improve instruction and results, Esperance said.

MS 266 participates in the Department of Educations Comfort Dog program, which sends dogs into schools to provide emotional support for students. Sixth-graders, in particular, spend time with Peter Parker, the dog. [photo from the schools website.]

Students may take as many as three Regents exams: Living Environment, Integrated Algebra and Spanish proficiency.

A downside of the building is that there is no science lab or library. The building was closed for two years between 2015-2017 while it was refurbished with a new roof and new technology, including SMART boards in every classroom and the school was temporarily relocated to Bedford Stuyvesant. Because of the move to a different neighborhood, some students transferred out, further decreasing an already low enrollment, the principal noted, but, she said, enrollment was stabilizing with the move back to its original building in Park Slope.

The school is open on Saturdays so students have access to computers and can come in to do homework. Its almost like a study hall, the principal said.

An increasing number of graduates attend arts high schools such as LaGuardia, Talent Unlimited and Brooklyn High School of the Arts, the principal said in a telephone interview. Other choices include Bedford Academy, Park Slope Collegiate, Midwood and the Harbor School, which, like MS 266, has a program for harvesting oysters.

SPECIAL EDUCATION: There is a sizable special education population; one-third of the students receive services. There are Integrated Co-Teaching classes on every grade, as well as one self-contained class for 6th and 7th graders. By 8th grade, the principal said, all children should be in a general education class. A District 75 school for children on the autism spectrum shares the building and some of those students attend classes with MS 266 students.

How many teachers have 3 or more years of experience teaching?
82%
75% Citywide Average