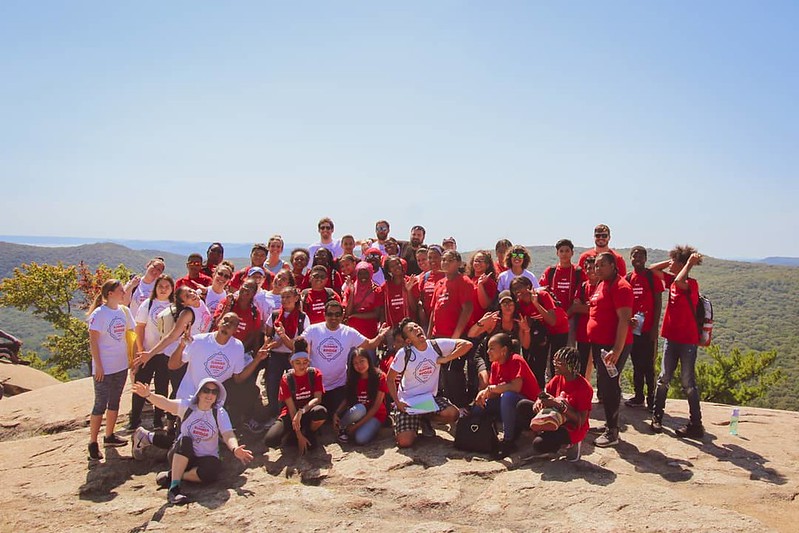 AMS is part of the New Visions Charter High Schools network, created by New Visions for Public Schools, a nonprofit organization founded in 1989.

Housed in the large John F. Kennedy High School Campus building, AMS opened in 2011 along with a sister school that focuses on the humanities. The two schools share the building with five other high schools. Although discipline is still a work in progress, AMS has solid and improving academic performance overall and a good track record serving students with disabilities. The majority of the students graduate on time.

Classes are organized in trimesters instead of semesters, which allows students to take more courses and accumulate more credits. Lessons are designed to be relevant to students lives, according to the New Visions website and published curriculum, following big themes and ideas rather than scripted lessons. Ninth graders cover themes such as identity and society, for example, and rather than do only work from a textbook, teens may work out real-life scenarios in groups to practice math and science concepts.

Many children arrive with low skills and the school has double subject periods in 9th and 10th grades, with a focus on reading, writing and speaking skills. By the first half of senior year, students do six pieces of formal writing. Students tackle special projects in the older grades around an issue that affects their community, such as gang violence or interactions with the police, according to the school’s website. AMS offers Advanced Placement courses in a variety of subjects including biology, calculus, statistics, English literature, drawing, US history and computer science.

The school day is from 8:15 am to 4:15 pm on Monday, Wednesday and Thursday, and ends an hour earlier on Tuesday and Friday. There is a required summer session for new 9th- and 10th-graders. Sports like basketball, football and gymnastics are campus-wide.

While students overwhelmingly say they feel safe in school, roughly half the teachers who responded to the survey say order and discipline are not maintained, according to school surveys. The most recent data for suspensions is six times the citywide average. However, most students say discipline is applied fairly.

ADMISSIONS: All students are admitted by lottery. To participate, students must fill out an application typically by April 1st. Applications received after the deadline will automatically be placed on a waitlist. Admissions is ongoing until all seats are filled. Visit www.newvisions.org/admissions or more information or email [email protected]  (Lydie Raschka, school data and email correspondence, January 2020)

Not offered in 2019-20
From unpublished, anonymized data from the class of 2019-20 provided by the New York State Education Department, brought to you by

This school shares the John F. Kennedy Educational Campus with six other schools

Bronx School of Law and Finance